Karen (Gage Golightly), Paul (Matthew Daddario), Marcy (Nadine Crocker) and two of their more juvenile, self-possessed friends (Dustin Ingram, Samuel Davis) head into the country for a weekend adventure in the great outdoors. Right at the start of their stay, a man, covered in blood, his skin literally dropping from his flesh as if it was made of wax, shows up at their doorstep pleading for help. Subsequently, all hell breaks loose, and one-by-one each of them finds they have mysteriously been infected by the same condition, the healthiest amongst them wondering what they are going to do and where they need to turn in order to find some help. 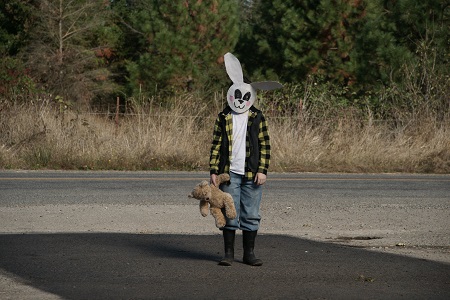 Sound familiar? It should, because this is basically the exact same scenario as Eli Roth’s rambunctious, giddily gory 2002 debut Cabin Fever. After spawning a series of rather terrible sequels, the first of which, 2009’s Cabin Fever 2: Spring Fever, was famously directed under protest by Ti West (who has proudly disowned the production not soon after its release), it turns out Roth felt it was time his eccentrically nasty low-budget shocker was remade. Handing things over to upcoming filmmaker Travis Z (Scavengers), the idea apparently was to treat the material in roughly the same way Gus Van Sant tackled Alfred Hitchcock’s 1960 classic Psycho back in 1998. In other words, it’s the exact same movie, virtually scene-for-scene and line-for-line, making the remake nothing short of pointless.

There are subtle differences, I guess. Technology has obviously progressed over the last 14 years, so Karen is now a little selfie-obsessed, while sleazy deputy interested in getting it on with the campers is now portrayed by a woman (Louise Linton), a fact of which I can only imagine in Roth and Travis Z’s world passes for feminism. Even stranger, the primary change comes down to one relating to the remake’s tone, this version treating things with a level of callous sincerity that’s honestly just plain mean. 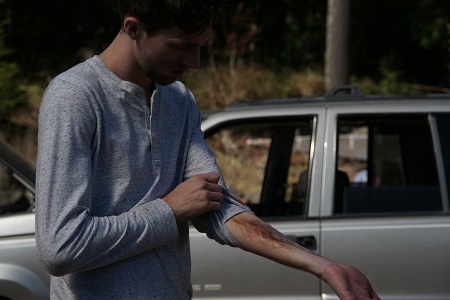 Roth’s original film has its issues, that goes without saying, but the fact it never took itself too seriously, that it was willing to play up the inherently bleak gallows humor, those facets certainly were not amongst them. Why this remake decides to treat events in a more documentary-like fashion, even with the inclusions of clueless law enforcement officials, cutthroat backwoods hillbillies and a feral kid in a bunny rabbit mask with a penchant for chomping on human flesh, frankly doesn’t make a lick of sense. Watching these kids fall to pieces, seeing them brutalize themselves in other, it all becomes more a test of endurance than it does anything else, witnessing suffering and pain seemingly all for the sake of witnessing suffering and pain.

Personally, I just don’t get it. The gore effects are fine, but they’re no better than the ones found in Roth’s version. More, the grossest of them are just direct pulls from the original, so the shock value of what happens when one unlucky soul decides to shave their legs is significantly lessened because of this. Save one key exception the kids themselves are almost wholly unlikeable, making their collective plight difficult to care one way or the other about. As for Karen, the one character who does deserve a little sympathy and affection, what happens to her is depicted with such callous insensitivity, such depraved indifference, her plight isn’t so much terrifying as it is unforgivable, her last scene a torturous test of endurance that’s just plain disgusting. In the end, there’s little else to say, this new Cabin Fever a bloody misfire that shouldn’t even exist in the first place. 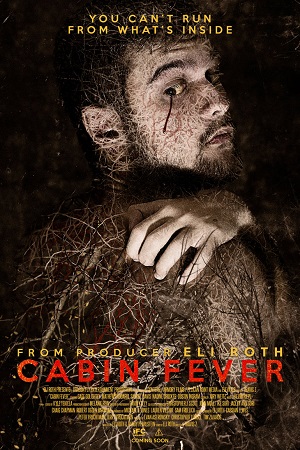