Cartel Land is Traffic but for real. Documentarian Matthew Heineman’s prize-winning Sundance sensation is unlike anything else we’ll see this year, non-fiction filmmaking as visceral, edge-of-your-seat thriller utilizing the medium in ways seldom done before. Like some breathless, almost surreal combination of the Afghan War observational stunners Restrepo and Korengal, as well as James Marsh’s mesmerizing recount of Philippe Petit’s 1974 high-wire illegal high-war act Man on Wire involving New York’s World Trade Center, this is the drug trade as never seen before.

Heineman primarily focuses on two men. In Mexico there is Dr. José Manuel Mireles, head of a militia group nicknamed ‘the Autodefensas’ trying to rid the Michoacán region of the country of the Knights Templar cartel. Over in the U.S. is Tim ‘Nailer’ Foley, a former anti-immigration crusader who changed focus to fight the cartels forming Arizona Border Recon to patrol the desolate desert spaces that lay between the two countries. Both men are vigilantes. Both are neither hero nor villain but rather something more uncomfortably in-between the two labels.

This is why Heineman’s film works as well as it does. It refuses to take sides, fastidiously remains observational allowing the viewer to decide just how positive or negative a mark Mireles and Foley are leaving. Granted, the majority of the violence is happening on the Mexican side. Additionally, because Mireles’ group is so large he has a lot more trouble keeping a firm grasp on their actions against the Knights Templar, the line between drug dealer and those attempting to stand against them disappearing entirely at times in the most unnerving of ways.

Not that Foley gets left off the hook. Not only is his own past interestingly dubious (to say the least), just by the nature of what he’s put together he ends up happening to interact with some of the more extreme elements in America today, many of whom having political leanings decidedly outside the mainstream. It’s readily apparent he is not fond of having to work alongside these types of fringe dwellers, candidly admitting he wished he could get more reputable individuals to stand alongside him. At the same time he’s also visibly upset those in the mainstream want to slap labels on the Arizona Border Recon as a potential menace, the Southern Poverty Law Center naming it a ‘nativist extremist group’ of particular annoyance to him.

There are no easy answers. No solutions as to how to curb the power of the cartels and to get the drug trade in check. What is clear is the hopelessness those stuck in the middle feel as they attempt to navigate their way through a devastatingly deadly minefield, none of them remotely sure their actions are making a speck of difference. With current events involving the out-of-control remarks by Republican Presidential candidates not knowing a darn thing of what it they claim to be speaking to as well as the stunning escape of a former cartel kingpin from a Mexican prison, make no mistake, Cartel Land couldn’t be more timely. Heineman’s epic is an intuitive, thought-provoking spectacle that forces the viewer to place themselves in the middle of the action, uneasily wondering what they’d do if faced with similar choices the likes of which Mireles and the Autodefensas grapple with each and every day. 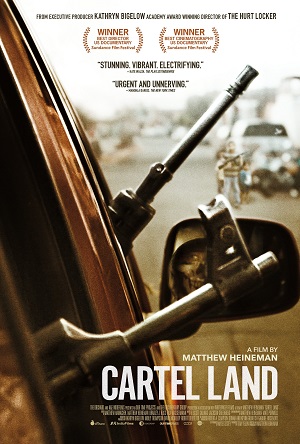