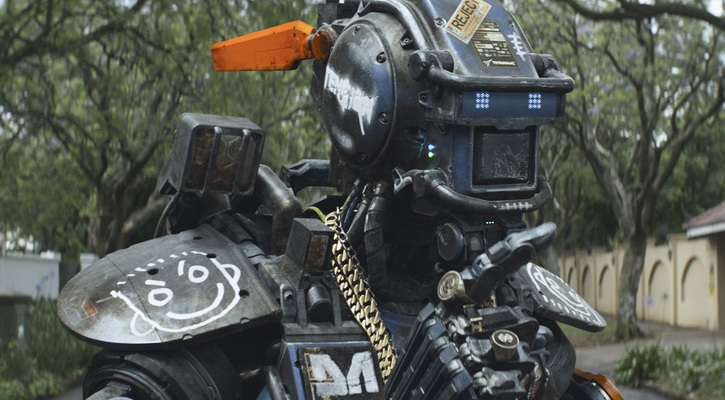 It is 2016, and in the South African city of Johannesburg crime is out of control. But thanks to genius Tetravaal Corp robotics engineer Deon Wilson (Dev Patel) things are about to change. He’s personally spearheaded the design and creation of a robot police force that will revolutionize law enforcement, pleasing CEO Michelle Bradley (Sigourney Weaver) while also sending the stock price of his company through the proverbial roof.

Yet Deon isn’t content. He wants to take things to the next level and transform robotic consciousness and human understanding of artificial intelligence forever, and as such he’s written a new program he thinks will do just that. But before he can upload his ideas into a battered police unit destined for demolition the scientist is kidnapped by a small group of criminals led by the cartoonish Ninja and his daffy blonde girlfriend Yolandi (real life South African rap stars NINJA and ¥O-LANDI VI$$ER). They force him to use his skills immediately, no time to test, no opportunity to plan, in hopes Deon can create a robot that will help them accomplish the biggest payroll heist Johannesburg has ever seen.

Thus is born Chappie, portrayed and voiced by actor Sharlto Copley with a team of visual effects and motion capture wizards responsible for his photorealistic final look. As a character, he’s incredible, director and co-writer Neill Blomkamp and fellow screenwriter Terri Tatchell – reteaming for the first time since District 9 – making him an enigmatic and deeply fascinating newborn evolving with convincing complexity. Something of a combination of Johnny 5, HAL 900 and Robocop, Chappie lives in ways that are astounding, making him one of the more fascinating characters likely to hit theatre screens in all of 2015.

But as a movie, as a finished motion picture, Chappie itself is a wildly anachronistic muddled mess. It’s unfocused and undisciplined. More than that, it treats its main characters with bizarre, close to callous cruelty, painting its most intelligent inhabitants as if their only goal in life was to be the biggest idiot in all of South Africa. People do things for reasons that confound and irritate, Deon especially, so developing a human connection to almost anything taking place becomes a virtual impossibility. 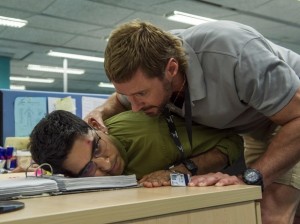 The biggest and most egregious offender is fellow Tetravaal engineer Vincent Moore (Hugh Jackman). A former military man, he is disgusted by the very concept of artificial intelligence, which in and of itself would be okay, but neither Blomkamp nor Tatchell seem to know what to make of him. More than that, they’re so obsessed with cementing him as the dastardly sociopathic villain; they do a poor job of making his plan make a lick of sense. He’s an egotistical monster right from the start, and it’s only thanks to Jackman’s inherent star power and charisma that any sense of multidimensionality is attained, Vincent nothing more than a rote, incredibly forgettable thug who seems to take great joy in gunning down those he sees as criminals more than he does anything else.

Yet it doesn’t stop there. The idea is simple enough, the filmmakers setting up a scenario where the newly sentient life form is forced to decide between his maker, Deon, Yolandi (whom he decides to call “Mommy”) or Ninja, all of them setting themselves up as teachers and erstwhile parents vying to set the robot on his evolutionary path. But this discussion never takes shape, everything so mishandled it doesn’t matter near as much as it should if Chappie comes to understand what is right or what is wrong, while attempting to navigate the grey areas lying in-between. This moral quagmire is frustrating in its disheveled malevolence, the ideas being explored so fractured and incomplete they’re almost indecipherable.

On a technical front, however, Chappie is remarkable. This isn’t a Short Circuit meets Robocop meets District 9 clone; and while thematically similarities are readily apparent, from a visual and production standpoint Blomkamp has managed to create a world unique in and of itself. As already stated, the central character himself is astonishing – moving, evolving and reacting in ways that astound. More, there is a refreshing, almost sensual allure to Trent Opaloch’s (Captain America: The Winter Soldier) cinematography I was drawn to, while Jules Cook’s suitably dingy, impeccably lived-in production design captures the spirit of what the director is aiming for to perfection.

I appreciate Blomkamp’s ambition. Between this, District 9 and Elysium he’s certainly interested in being a sci-fi filmmaker who wants to be known for tackling big ideas and complex themes. Problem is, while his first film got most of what he wanted to right, his two follow-ups have been far less successful, each film not knowing what to do with itself once they’ve presented their initial world-in-dystopian-crisis scenarios. Chappie shows great promise, it just maddeningly refuses to live up to it, its final moments as robotic and as poorly engineered as a malfunctioning Furby ready for the scrapheap. 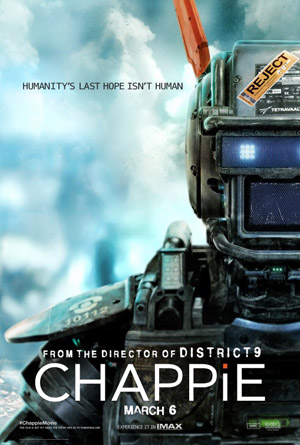