In the 1960s the Brazilian government erected a township designed to specifically deal with impoverished and homeless citizens. Named Cidade de Deus, or “City of God,” this small community grew over the decades to become one of the most dangerous places in Brazil, a Rio de Janeiro slum ruled by teenage drug barons and ruthless gang leaders.

Adapting Paulo Lins’ acclaimed novel Cidade de Deus, director Fernando Meirelles and screenwriter Bráulio Mantovarni attempt to track the evolution and birth of this city. Through it all, a world not seen on an international scale since Hector Babenco’s heartrending 1981 feature Pixote is laid cold and bare. The resulting film City of God (Cidade de Deus) is one of the most powerful and emotionally resonant films I’ve seen in a long, long time.

Spanning three decades, the movie follows Rocket (newcomer Alexandre Rodrigues) as he grows up along with the slum in which he lives. As a child he watches as his brother Shaggy (Jonathan Haagensen) and his two friends Clipper (Jefechander Suplino) and Goose (Renato de Souza) become the town’s most notorious hoods, holding up gas trucks and committing the occasional armed robbery. Also watching them is Lil’ Dice (Douglas Silva), a youngster like Rocket who dreams of someday becoming Cidade de Deus’ biggest crime lord.

Flash forward to the 1970s and that dream has grown into a brutal reality. Now known as Lil’ Zé (Leandro Firmino), the young man rules the slum with his best friend Benny (Phellipe Haagensen). Discovering more power in the drug trade, the duo has more control of the city and is in possession of substantive wealth the likes of which they could only dream of as children.

Rocket also is growing up, but he discovers that being a hoodlum just isn’t for him. He longs to be a photographer, reasoning that if he can document the goings on in the Cidade de Deus it could punch his ticket out of the slum and to a better life. Taking a job with a local paper he makes friends with the resident staff photographer and in doing so begins to see doorways to future happiness and freedom suddenly open before him.

Cidade de Deus is the film’s main character. Living and breathing, watching it grow from a dirt-covered and sun-drenched conclave in the ‘60s to a crowded, stone-carved city in the ‘80s, I could feel the blood dripping as it flowed precipitously down its sad and lonely streets. This is a place where human connection is as fragile as a mosquito’s wing, the threat of violence and death permeating every facet of a resident’s life.

Even though City of God uses an episodic narrative to tell its tale it is never less than absorbing. Watching the humanity in the city slowly crumble into nothingness as poverty and degradation slowly take over, I couldn’t shake the growing lump in my stomach as it hardened into a dry, cold clump. This is a film that uses the interlocking stories of various characters to weave a tale of the birth and eventual blasé banality of evil. The horrors of life in Cidade de Deus become more of an everyday affair as people go about their lives trying not to be hit by a random bullet, the combatants firing the guns getting depressingly younger as the generations fly by, pre-teens eventually walking the streets like full-fledged mafia kingpins by the time things come to their heart-stopping conclusion.

This is not a film for the faint of heart. While it will undoubtedly be compared to other full-throttle crime tales like Amores Perros and Pulp Fiction, other than the way it uses interlocking separate stories City of God is unlike either. This is a story about the nature and structure of continuous poverty and violence and the effects that combination has upon a society free to govern, protect and rule itself. It is Cidade de Deus’ tale, and Rocket, Lil’ Zé, Benny and the rest are only brief chapters in its narrative. While some of these characters break free, others bury themselves in the never-ending tragic cycle of violence. As for the city itself, it just keeps on dying, the Brazilian government seemingly content to let it keep doing so. 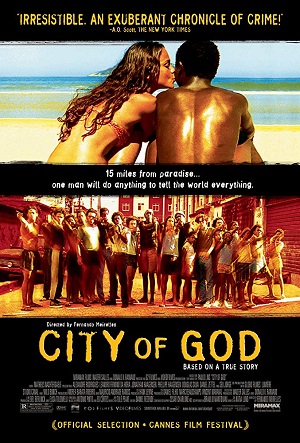