Come Out and Play is the debut film for Belarus filmmaker Makinov. It is also a remake of the 1976 cult horror favorite Who Can Kill a Child? (Quién puede matar a un niño), both films based on the book by author Juan José Plans. Moving the action to Mexico, the plot revolves around Americans Francis (Ebon Moss-Bachrach) and Beth (Vinessa Shaw), the loving couple taking a brief sojourn south of the border a month or so before the birth of their first child. 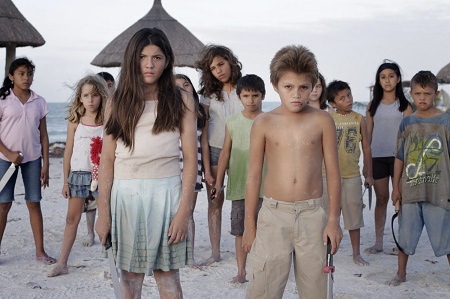 On a whim, the pair decide to rent a boat and head out to a secluded island celebrated as a quiet tourist destination perfect for rest and relaxation. But when they get there, things are frighteningly out of sorts. While there are plenty of children running around wild, not a single adult is can be found anywhere. The town, for all intents and purposes, is deserted, a feeling of ominous dread falling upon Francis and Beth as they come to realize a horrific truth.

The idea of an evil child isn’t new. The concept that a pack of pint-sized pipsqueaks could suddenly transform into sparkly-eyed hellions is innately unsettling, and no one likes to think that the smallest, youngest and seemingly most innocent amongst us could in fact be unfettered vessels for unrestrained bloody carnage. Just the idea makes me shudder, and from Village of the Damned to The Bad Seed to The Omen to Children of the Corn to The Children to the original Spanish version of this particular story there are enough nightmares involving this scenario to fill a century of sleepless nights.

Because it is so inherently unsettling, because so many writers and filmmakers have posited the what-ifs and the how-comes behind this idea for so many decades, the element of surprise as it concerns Francis and Beth’s search for answers and their subsequent attempts to survive is sadly lacking. I was well ahead of both of them before they even set foot on the island, and the fact it takes them so long to figure out something is seriously wrong is a little head-scratching. They take too much for granted and don’t appear to care as they aimlessly wander around the village, and by the time Francis leaves Beth alone for what feels like the umpteenth time to individually investigate things my patience was starting to wear more than a little thin.

But the truth does come out and the worm does turn, Makinov (who wrote the script, shot the film, edited it and was the primary force behind its sound design) ratcheting up the tension with murderous precision. Eschewing jump scares and obvious orchestral cues engineered for shock value and nothing else, he instead lets scenes play out organically, his calmly measured camerawork digging deeper under the skin as Francis and Beth’s island journey intensifies. His showcases a strong directorial fortitude, allowing his actors the freedom to craft their characters as they see fit, Moss-Bachrach and Shaw giving robust, self-actualized performances that I genuinely responded to.

The film’s midsection is priceless. Makinov does a grand job of giving the terrible life, and by the time Francis and Beth are trapped inside a rundown prison on the verge of physical and psychological breakdown I got the feeling that this was one remake that might just outdo the original. The filmmaker’s unflinching eye does not flutter, does not blink, and when an adult finally makes the decision to do the unthinkable I might have let out an audible gasp in frazzled, understanding heartbreak.

Sadly, Makinov also showcases a tendency to over explain what is going on, and while he never offers up definitive answers as to why the children have gone murderously psychotic he does show more in regards to their methodology and how they bring others to their cause than I found necessary. Some of the plot twists don’t have the emotional potency I hoped they would, and by the time Francis headed outside ready to do what he must for Beth to survive I had trouble generating any additional enthusiasm that might have helped me care even a tiny bit more.

Still, this is a solid remake of an underground, and in some respects underappreciated, chiller that turns the right screws and knows how to use restraint, sound and silence in constant, deliberately uncomfortable collaboration. Makinov shows he knows what he’s doing, ratcheting up tension at times in ways that had me sitting on the edge of my seat ready to gnaw the nails off of my fingers. While these kids are far from all right, the movie they’re in is really rather good, and for genre fans interested in watching fare that won’t insult their intelligence while still generating a number of decent scares, on that front Come Out and Play fits the bill nicely. 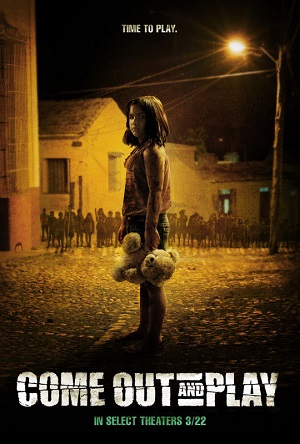