Piotr (Itay Tiran) has made the journey from the hustle and bustle of England to the secluded Polish countryside to marry his fiancée Zaneta (Agnieszka Zulewska). As a gift, her family has given him their large, rundown country home for him to do with as he pleases, thinking he’d be pleased at the idea of fixing it up and returning it to its former glory. While doing a routine inspection, Piotr inadvertently crashes into a mud pit of human remains, their discovery a surprise that leaves him understandably shaken.

The next day, while the wedding itself goes off without a hitch, during the reception Zaneta notices her new husband is acting strangely. As the night progresses, Piotr begins to feel less and less like himself, almost as if he is possessed by some sort of spirit. Long hidden secrets are unceremoniously revealed, Zaneta’s father (Andrzej Grabowski) increasingly agitated as things spiral out of control and his new son-in-law starts spouting supernatural gibberish that could potentially lead to his good name being dragged through the mud and forever ruined.

The final film from revered Polish director Marcin Wrona (My Flesh My Blood) and inspired by Jewish folklore, most notably legends associated with the supernatural force known as a dybbuk, Demon isn’t horror movie although there are moments of suspense and terror that stop the blood cold. Yet, it is also not an intense relationship drama, even though moments of pain, sorrow, love, sacrifice and madness are continually on display. All the same, it is still not a comedy, even if scenes of bleak, unbridled pitch black humor are so pointedly strong it’s impossible not to watch the film without laughing out loud at least a couple of times as events spiral hopelessly out of Piotr’s control.

All of which makes the film as odd as it sounds, Wrona and his fellow screenwriter Pawel Maslona crafting a story where science, superstition and religion walk hand-in-hand in uneasy truce, only to be beaten and battered down by a wrathful presence that doesn’t appear to care how much collateral damage it leaves in its wake. But as crazy as it all might be this story is peculiarly enchanting in an uncomfortably surrealistic way, its delectable charms increasing in number as things progress to their inevitably bleak conclusion. It’s a witty tale, one where the ins and outs are as gruesome as they are thoughtful. But while some of the interior mechanics connecting one character to the next aren’t always satisfactory, the main themes propelling things forward are, most managing to be pleasingly universal no matter how esoteric they might initially appear to be.

It’s all crisply shot by frequent Wrona collaborator Pawel Flis (The Christening), his robust, eerily crafty cinematography keeping just enough on the side of the frame to keep the viewer guessing as to what might be going on just outside of their direct line of sight. The film toys with its audience, tilting between comedy, drama and horror in ways that are continually surprising and, even better, increasingly unsettling. This allows tension to build naturally and in a bracingly believable manner, the human horror of what it is Piotr is facing all the more palpably disturbing because of this.

It isn’t a continuous smooth sail, and some of the more eccentric narrative machinations can be moderately tiresome, especially during a slightly lumpy midsection where the groom starts his spiral into possession and Zaneta, her father and a handful of others wonder what the heck is going on. Thankfully, there are so many striking moments, and Tiran’s performance is just so gosh darn terrific, that any hiccups that do arise are few and far between. Best of all, Wrona builds things to the type of shattering, emotionally catastrophic climax that lingers in the mind long after the curtain has closed, making Demon a paranormal descent into madness and mayhem that’s hauntingly good. 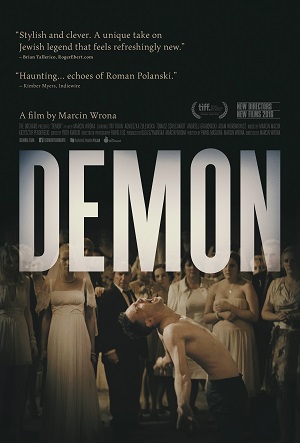