Life isn’t easy for Malcolm (Shameik Moore). A self-professed geek, musician and 1990s Hip-Hop/R&B enthusiast, on the cusp of graduation the High School senior was born and raised in The Bottoms, a brutal Inglewood, CA neighborhood where if the jocks aren’t beating you up than the gangbangers probably are. He and his best friends Diggy (Kiersey Clemons) and Jib (Tony Revolori) are biding their time until they can get out and move on to college, carefully plotting each step so as not to accidentally make a wrong one.

Well, make that watching most of their steps, because after inadvertently making friends with local drug kingpin Dom (A$AP Rocky) the trio get invited to his late night birthday party at a local club, deciding to go even though each of them fully realizes it’s likely not the best idea they’ve collectively had. But go they do, Malcolm even getting infatuated with another local girl, Nakia (Zoë Kravitz), the young woman currently studying for her GED in hopes of getting into college and potentially getting out of The Bottoms just like he wants to do.

From that point onward, writer/director Rick Famuyiwa’s (The Wood) freewheeling, unhinged slice of life Hip-Hop comedy Dope brazenly forges its own path, and while the story is hardly unique it’s delivered with such electrifying authenticity the fact it isn’t original ends up not being as much of a big thing as you might initially expect. The film has a freewheeling, adrenalized grace that’s intoxicating, playfully rolling around in cultural youth touchstones of today while also deftly paying homage to everything from Pulp Fiction to The 400 Blows to Boyz N the Hood.

The central quagmire revolves around Malcolm attempting to free himself from a backpack that’s been mysteriously filled with Dom’s drugs. With rival dealers trying to steal it, and with the people he’s been instructed to turn it over to only wanting the money earned from its sale and not the actual product itself, the super-smart teen with dreams of going to Harvard suddenly finds himself in the middle of a mess that could derail all his future plans. Now he and his friends are forced to attend class, avoid the police and take the SATs while at the same time figuring out the best plan to get rid of Dom’s product, one that hopefully doesn’t get them shot in the process.

The movie is all over the map, its plot far more sprawling and gigantic than the initial, and actually fairly simple, synopsis would lead one to believe. Characters of all backgrounds, groups, races and economic strata come and go yet do so in ways that both drive the narrative forward while also adding complexity to Malcom’s overall maturation, everything coming together in ways that feel vital, of the moment and breathlessly self-aware. More than that, as dark and as dangerous as events might ultimately present themselves to be Dope never loses its comedic edge, maintaining a sense of joyful discovery throughout that’s giddily impressive.

By keeping the froth bubbling Famuyiwa smartly understands he’s also increasing the dramatic stakes, so when Malcolm is forced to do things against established character traits the effect it has on him, his friends, his adversaries who know him well and finally people sitting in the audience taking it all in is devastating. Everyone understands what it means for this kid to potentially be led towards the doorstep of darkness, grasps what should be in store for him in the future if he’s allowed to continue down the road his determination and intelligence have set him on. There is a stark, ominously disturbing aura to these moments that came close to generating tears, making the kid’s perseverance in the face of all that’s against him all the more courageous.

Relative newcomer Moore is outstanding. He’s the one that keeps the movie on track, never allowing it to drift too far into absurdity or sentimentality, anchoring the proceedings with a complex, potently effective portrait of youth in revolt. As terrific as his costars might be (and Clemonds and Revolori are both wonderful), as strong as the supporting cast might is (Kravitz is pitch-perfect, rapper Rocky makes a sensational debut, while veterans Kimberly Elise and Roger Guenveur Smith more than make their presence felt), this is Moore’s showcase and he runs with it, delivering a performance that by all accounts should instantaneously make him a star.

The film is a little overstuffed, and not all of the elements, particularly a segue into the world of the dark interwebs, bitcoins and a doped-up college hacker played by Blake Anderson, work nearly as well as I think Famuyiwa intends them to. Additionally, the balance between the comedy and the violence can sometimes feel a little off, the transitions happening with such brutal suddenness the impact can be jarring, and not in a good way.

Not that it matters. Spectacularly edited by Lee Haugen, overflowing in the musical energies of today, the 1990s and those composed just for the film (assembled and written by executive producer Pharrell Williams and composer Germaine Franco), Dope has a manic youthful effervescence that delights at every turn. Famuyiwa has done his best work yet both as a writer and as a director, delivering a piece of frothy social commentary masquerading as comedic farce we’re going to be talking about, analyzing, obsessing over and, most importantly, enjoying for many years to come. 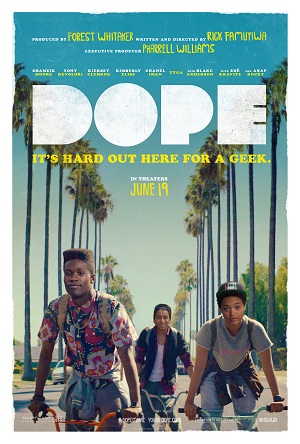