Over-Stuffed Duel a Showcase for Harrelson

Decorated Texas Ranger David Kingston (Liam Hemsworth) is tasked by Governor Ross (William Sadler) to go undercover as a wandering drifter in a small town on the Mexican border. It is run by the charismatic preacher Abraham Brand (Woody Harrelson), citizens claiming he has all sorts of otherworldly powers including the ability to heal the sick and to foresee future events. 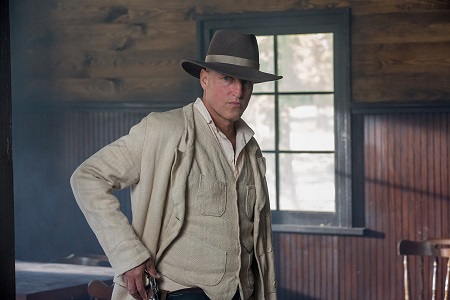 While this is strange in and of itself, is is not why the governor is sending David into harm’s way. The mutilated and bullet-riddled bodies of Mexican citizens have been floating down the Rio Grande, including the corpse of one of Texas ally General Calderon’s (José Zúñiga) relatives, Abraham’s parish the only civilized community in the immediate area where they might have come from. Accompanied by his wife Marisol (Alice Braga), the veteran lawman does what he can to ingratiate himself with this supposedly pious man of God. But nothing is what it seems, the ties binding David to Abraham more complex, deep and intimate than either fully comprehends.

As straightforward as most of that synopsis might sound, there is way more going on in director Kieran Darcy-Smith’s (Wish You Were Here) and writer Matt Cook’s (Triple 9) handsomely mounted Western The Duel then initially meets the eye. Too much, if I’m being honest, the film bouncing through so many different subplots and narrative machinations keeping track of them can be rather difficult. Central thrusts involving racism are readily obvious right from the start, figuring out who is killing all the Mexicans not particularly difficult. But there are also threads involving revenge, cults, religious fundamentalism, misogyny and politics that all come into play, all of them sewn together in ways that are as random as they are bizarre.

That the movie remains watchable throughout is a testament to the unsettling, viscerally alive atmosphere Darcy-Smith is able to manufacture coupled with the sheer magnetism of Harrelson’s bravura performance. For the director, there is a sturdy, intimately affecting quality to things that’s compelling, and even when Cook’s script has trouble connecting one dot to the next, there was still enough electricity pulsing underneath the surface that I was still always interested in discovering what was going to happen next. As for Harrelson, what else is there to say at this point? The actor could just show up on set and arguably steal scenes from all of his costars no matter who they might be, his understated flamboyance a near perfect counterpoint to the roiling fury hiding not-so-secretly underneath Abraham’s coarsely reptilian, if still deceptively thin, skin.

I wish I could say the same for Hemsworth. As Western heroes go, he’s all right, I guess, but the actor is so obsessed with playing things close to the vest his rising fury as he discovers the truth behind this mystery’s serpentine layers isn’t nearly as palpable as I kept feeling it should have been. When the connections between David and Abraham are finally revealed, the latter’s reaction to the discovery should be devastating, his seeming indifference to their shared history a shocking revelation that should have had me questioning the Texas Ranger’s motives. Instead, Hemsworth plays this sequence with such ho-hum passivity the inherent emotional components driving his character are registered mute, and while admittedly more interesting here than he is in Roland Emmerich’s Independence Day: Resurgence it’s easy to imagine what might have been had another been cast in the part. 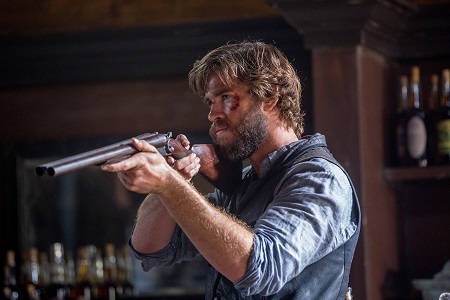 Braga is sadly wasted, Marisol’s transformation an illogical mishmash of religious fervor, ill-health and narrative necessity that never works as well as I imagine Cook hopes it does. Better are the script’s racial observations, including in how, although disgusted by his discoveries, David still stands back and allows the unthinkable to occur, having no problem sacrificing a Mexican life or two in order to get the evidence he needs against those committing these heinous crimes. There is also an air of patriarchal misogyny that’s fascinating, and while Cook began composing his story long before Donald Trump and his followers became front page news, the parallels between the perceived Republican Presidential nominee and the craven, self-serving Abraham are still undeniable.

The film looks sensational, Toby Corbett (Pitch Perfect 2) authentically lived-in production design astonishing throughout. Jules O’Loughlin’s (Krampus) smooth, seductively simple cinematography is intoxicating, while composer Craig Eastman’s minimalist score adds just the right touch whenever it is utilized. More, at just under two hours and moving at its own reserved pace The Duel never feels long, Darcy-Smith allowing events to build with a deliberate delicacy that allows the final face-off between David and Abraham to explode in emotive ferocity. This climax alone is enough for me to recommend the watching of the film to genre fans. At the same time, it’s also a giant reason that, as strong as many of the central mechanisms might be, I still find myself looking at this Western as something of a minor disappointment. 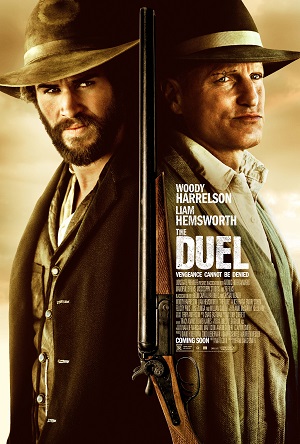