Sarah Moss (Brit Marling) has been chosen. Her authoritative boss Sharon (Patricia Clarkson) has handpicked the former F.B.I. agent for a plum assignment, one their corporate clients will be sure to cheer if she achieves results. Sarah is going to go undercover. She’s going to work her way inside the elusive anarchist collective calling themselves “The East,” discovering their leaders and their whereabouts so the government can make arrests and in the process make Sharon’s company numerous millions in profits and new clientele in the process. 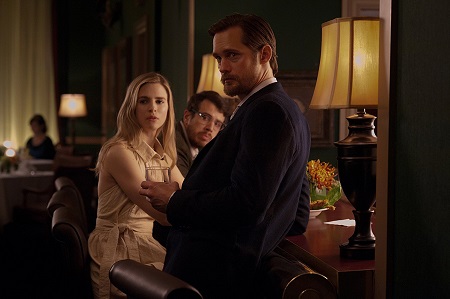 It takes some doing, but through her resilience and intelligence she finally makes a connection, standing up for gender variant drifter Luca (Shiloh Fernandez) when they’re assaulted opening some unexpected doors. Soon Sarah is right in the middle of the group, befriending their resident doctor Doc (Toby Kebbell) even while the fiery and unpredictable Izzy (Ellen Page) questions whether or not she should be allowed to stay. But it is their leader, the quietly enigmatic Benji (Alexander Skarsgård) who fascinates her the most, leading this young investigator down an ethical and moral rabbit hole no amount of specialized training ever could have prepared her for.

It can now be said with certainty. After Another Earth and Sound of My Voice, actress, producer co-writer Brit Marling, reteaming for a second straight time with director and fellow screenwriter Zal Batmanglij, is a major talent. Fearlessly unafraid to take chances, eager to write about hot button issues ripped from the headlines and doing so in a way that defies convention and forces the viewer to ask brutally tough questions, Marling has proven herself willing to go above and beyond. As great as she’s been acting in other people’s movies, she’s terrific in Arbitrage and The Company You Keep, what she’s done in the three motion pictures she’s helped shepherd to the screen herself is beyond reproach, her latest drama The East cementing this as a fact no ifs, ands or buts about it.

Same in many respects can be said for Batmanglij. His confidence behind the camera here is, if anything, more exemplary than it was on Sound of My Voice. His use of montage, the way he seamlessly transitions from one sequence to the next, how he juggles all of the film’s themes and characters with such ease, all of it is exemplary, and even at a slightly longish 116 minutes I admit to being fascinated by The East for virtually every single second of its running time.

You could potentially make a case that Marling and Batmanglij are in some respects repeating themselves, but I wouldn’t necessarily agree with that assessment. Still, both The East and Sound of My Voice center on characters going undercover, and while the latter was dealing with cults, the driven do-gooders battling corporate malfeasance in all ways they deem suitable in the former aren’t too far from being cult-like themselves. There are undeniable similarities, and as such a slight sense of déjà vu does hover over the proceedings now and again.

But not enough to matter, at least not in my opinion, the two films asking the audience to ponder entirely different sets of questions with their respective stories leading to conclusions that couldn’t be any more dissimilar. Sarah’s evolution, the way she responds to the information Benji, Izzy, Doc and the others impart to her, how she handles her responsibilities working for Sharon, all of it is juggled nicely, things building to a believably ambiguous conclusion that fits the film perfectly.

There are no easy outs here, no shortcuts, and as such people do their jobs as directed while also understanding the implications of what doing so will mean to, not only those they’re starting to become friendly with, but also the companies targeted by The East. It’s a venal shell game where grey overwhelms all of the black and white ideals Sarah originally held, making her ultimate destination all the more emotionally affecting in the process. 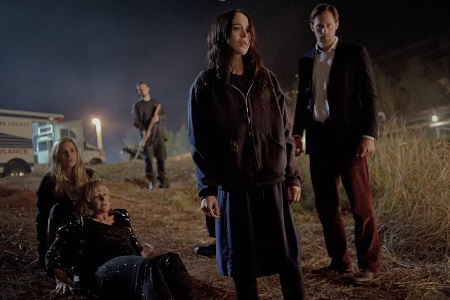 Marling, as I’ve stated, is superb, but she and Batmanglij have surrounded her with a top-notch cast who are collective every bit as excellent as she proves to be. Kebbell underplays his crippled psychological nuances nicely, while Skarsgård intoxicatingly proves again just how underrated an actor he continues to be (go watch What Maisie Knew for even more proof of that). Clarkson steals scenes with a crook of the neck and the lifting of an eyebrow, hinting at Sharon’s darker depths without ever once breaking her icily charming veneer. As for Page, she’s astonishing, a good portion of the final act devoted to who her Izzy really is, why what she’s doing means so much to her and what price she is willing to pay to make sure those responsible, even those closest to her, understand the pain their cavalier callousness has caused.

I’m having trouble getting this one out of my head, and the way it concludes I found particularly delightful (especially the music-driven coda played during the end credits). Does it resonate as deeply and as intimately as Sound of My Voice? No, I can’t go that far. Be that as it may I still think The East is a strong, noteworthy effort from Marling and Batmanglij that offers much food for thought to chew on, doing so in a fashion that is as intelligently stimulating as it is entertainingly adventuress. This movie is a gem. See it right away. 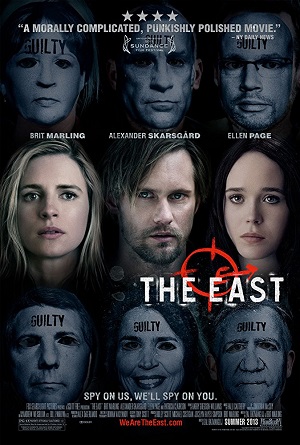