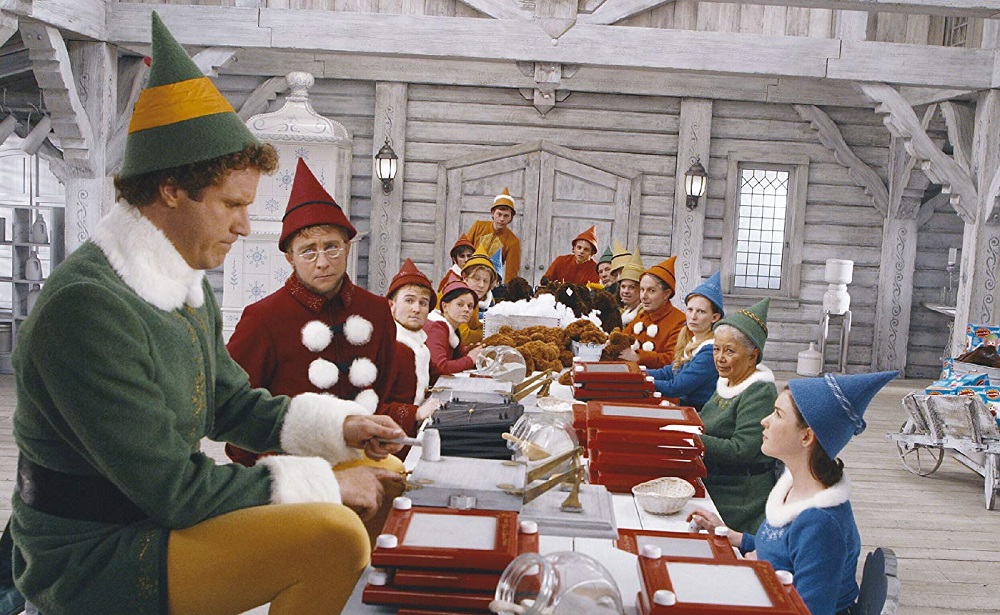 Every now and then I can’t help but feel a little like Ebenezer Scrooge. I sit in a darkened theater, the audience around me enjoying themselves immensely all the while I slowly melt into the seat, fuming that I have to endure such a chunk of cow manure. Scary Movie 3 was like that, and I was more than happy to admit it even if I did minimize my attack a little on the realization that Airplane-style scatter-shot comedy typically isn’t my bag (although I do love Airplane; can’t lie about that). 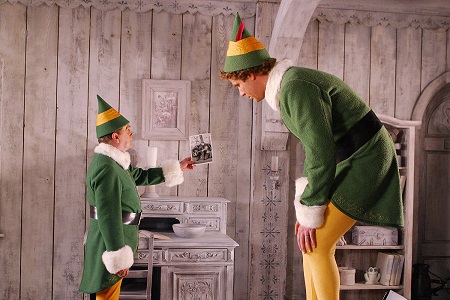 Well, the gloves are off this time around, for no matter how many different ways you look at it, former “Saturday Night Live” funnyman Will Ferrell’s Christmas comedy Elf is a big lump of yuletide coal. What’s worse is that it shouldn’t be, the film offering up a sweet, good-natured premise that has no reason to spectacularly fail as it does. But after a sprightly opening the Christmas-themed comedy collapses into a bilge pile of holiday movie clichés. It is a mean, aggressively mean comedy that purports to wear its heart on its sleeve but instead forgets it out back in the trash heap behind the theater’s back door. To put things even simply: I hated this movie.

Ferrell stars as Buddy, a human who snuck into Santa’s (Edward Asner) toy sack 30 years prior. Subsequently, he was raised by Papa Elf (Bob Newhart), the big guy’s chief sleigh mechanic, as just another youngster running around making toys at the North Pole. But while Buddy’s heart is in the right place, his six-foot-plus frame in a world of four-foot toy makers doesn’t fit and everyone except him sees it. Needless to say, Papa has to reveal to his devastated son that he is a human being and not an elf, his real father living deep within the heart of New York City.

That father turns out to be publishing magnate Walter (James Caan), his company specializing in children’s books, and he’s on the naughty list this coming Christmas. Buddy is sure he can fix that. Having never met the man his heart is still full of love for him and that should be more than enough to bring the callous publisher back into the fold of the righteous. But the big city isn’t at all what he expects. His father is loath to call this walking man-child his son. He has trouble making friends. He doesn’t understand the customs of the people residing in the Big Apple. Yet whether it is working at Gimbel’s and romancing the beguiling Jovey (Zooey Deschanel), or winning the heart of his half-brother Michael (Daniel Tay) in a Central Park snowball fight, Buddy still manages to ingratiate himself with everyone he meets, and he’s certain Walter will be the next to give in to the former elf’s altruistic charms.

That’s pretty much it for a plot. Sure there is the big conflict going on in Elf about whether or not Walter will get his Christmas Spirit back, and there is a big to-do near the end with Buddy frantically trying to fix Santa’s damaged sleigh and save the holiday, but these seem more like afterthoughts than actual plot points. Besides, in a movie like this the outcome of those struggles is self-evident. No, the big thing going on in Elf is the fish-out-of-water shenanigans of its ‘Crocodile’ Dundee-like protagonist. His sweet earnestness and never-say-day valor in the face of overwhelming odds supposedly heartwarming. For me, it was simply soul-crushing.

Writer David Berenbaum’s script knows all the moves of holiday classics like Miracle on 34th Street and It’s a Wonderful Life but sadly shows none of their intelligence or heart. It is a crash-course in brutalist physical comedy of the absurd, the movie spending more time making fun of its hero than it does garnering sympathy for him or his quest. It’s like 90-minutes of the worst “Saturday Night Live” skit imaginable yet told with all the earnestness of an Oscar-winning epic. I felt bludgeoned by all that was going on, my head hurting so badly by the end it was like it was me and not grandma who got run over by a heard of reindeer and was left trampled in the snow to die.

It does not help that Ferrell wears exactly one puppy dog expression on his face for the movie’s entire running time or that he delivers his lines with a flat, faux childishness that’s borderline creepy. While he is a gifted physical comedienne, one startling sequence between him and a cab did actually make me laugh out loud, he isn’t a very good actor, at least not yet. He can’t seem to modulate his performance, doesn’t know how to tone things down. As Buddy turns more and more into a slightly overbearing, unintelligent stalker, I found that I was finding the character to be more disturbing than he was endearing. Ferrell seems to have no idea how to make the man-elf likable, relying upon his one mannerism of detached over-exuberance to carry him through to the end of the story.

The movie also wastes the talents of a plethora of great actors. Caan and Newhart come out best, but only because Berenbaum’s script allows them both men a moment or two to stretch their comedic legs. Not so well off are Deschanel, Asner (who must be the most uncharitable Santa ever put to film in a family flick) and Mary Steenburgen, all stuck with caricatures so thinly realized each is at a loss to make them memorable.

What’s really a pity, though, is how great this movie could have been. Elf opens with delirious brilliance up in the North Pole that got me thinking I was about to see something wonderful. Noted indie actor and director Jon Favreau stages these sequences in a Rankin & Bass world of wonders, purposefully referencing the stop-motion excellence of “Rudolph the Red-Nosed Reindeer” and “Santa Claus is Coming to Town.” These opening minutes are perfectly sublime and a testament to how incredible Rusty Smith’s production design, Kelvin Humenny’s art direction and Johanne Hubert’s set decoration all prove to be. I wanted more of the movie to be set in this wondrously created world. 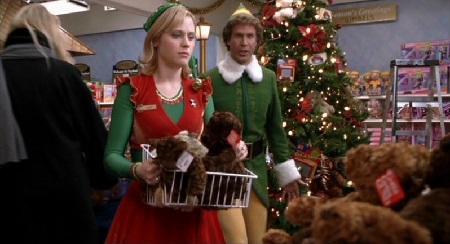 But frustratingly it’s back to a New York we’ve seen time and time again for this story, this depiction of the Big Apple a blasé collage of sights and sounds that could fit into any other ho-hum holiday picture that has taken place in this time-worn mecca of cinematic civilization. Not that going to New York would be so bad if the movie had anything to say. Instead, all Berenbaum and Favreau can do is set up a series of sight gags that grow increasingly vicious as events progress. While they do thankfully dismiss with much of the potty and bathroom humor that has become so popular in family comedies in recent years, they unfortunately substitute it for a winsome stupidity that they apparently want the audience to embrace, the dim-witted cluelessness of it all to my mind infuriating.

Based on the crowd I saw it with, maybe the filmmakers have done the right thing here. The audience sure as heck laughed far more than I did. Maybe things like confident storytelling and intelligently drawn characters aren’t what today’s viewers are looking for. Maybe all they need are angry authors viciously beating up six-foot idiots or simpletons pouring syrup on their morning spaghetti. But I don’t like or enjoy any of that, and I refuse to accept that the majority of those out there in the ticket-buying world do, either. Elf isn’t Christmas cheer, it’s Christmas excrement, and here’s hoping it finds its way to the sewers as fast as possible. 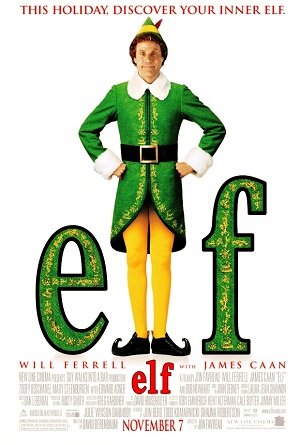