After learning their regular babysitter Maggie (Elizabeth Jayne) is unavailable for the night, Dan (Chris Beetem) and Joyce Thompson (Susan Pourfar) turn to her best friend Anna (Sarah Bolger) for help. Thankfully she’s available to look after their three kids Jacob (Joshua Rush), Sally (Carly Adams) and Christopher (Thomas Bair), leaving the trio in her apparently capable hands as they head out for the night to celebrate their anniversary. 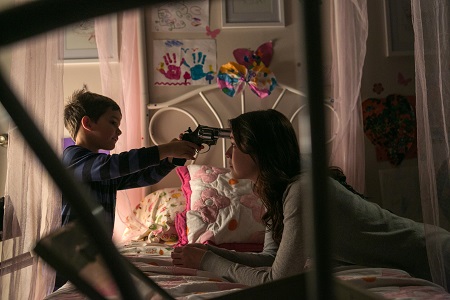 They should have spent more time checking the young girl’s resume, because everything is decidedly not like it seems in the slow burn B-movie Emelie, a crafty psychological thriller that reveals its cards relatively early on but then takes its time uncomfortably playing them. Unsurprisingly, Anna isn’t who she claims to be, but what she wants with the Thompson’s? Why she is in their home? That is a little harder to figure out, the answer a truly terrifying revelation that got so completely under my skin I could feel the reverberations running through my veins long after the film itself had come to an end.

Directed by newcomer Michael Thelin, working from a screenplay by Rich Herbeck, the movie isn’t concerned with shaking up conventions or doing the unexpected. What it is interested in is crafting complex characters, not the least of which are the mysterious babysitter and her eldest charge, 11-year-old Jacob. They are the ones who interact the most, their game of psychological cat-and-mouse the lynchpin holding things together. He is the one he ascertains Anna is actually Emelie, and what first appears to be a cool babysitter giving the kids she’s looking after a newfound sort of freedom they’ve never known before is actually a sinister game of Duck, Duck, Goose the point of which only she truly knows.

I like the fact that Thelin and Herbeck don’t spend a lot of time going into Anna/Emelie’s back story, that they don’t dig too deeply into the whys into what it is she is doing. They deliver the answers piecemeal, little by little, and while these flashbacks aren’t always necessary, and aren’t particularly subtle, they still never say anything more than what is necessary, allowing the babysitter’s psychosis to feel far more unnerving because of this. I also love the ways she initially toys with the collective emotions of the children, an early scene where she asks Jacob to grab her a tampon creepy, nasty, bleakly humorous and undeniably disquieting all at the same time.

On the flip side, the filmmakers also do a grand job of seeing events through the eyes of a child just figuring out who he is and what he is made of, young Jacob at an age where he can put pieces together even if he’s not entirely sure what to do with them once the puzzle starts coming together. He knows something is amiss relatively early on, but what to do about his concerns is something he just doesn’t have the experience or the understanding to be able to figure out. Jacob’s parents have taught him to respect authority figures, and as this new babysitter has been presented to him as one it places him in an unfathomable quandary his young mind is barely prepared to deal with.

Bolger is terrific, quietly underplaying her psychopathic character with a delicate precision that grows more and more unsettling as the film progresses. There is also a delicate despair to her performance that’s oddly touching, and while what Anna/Emelie is doing is monstrous there’s an intimate potency to her machinations that’s impossible to dismiss. Bolger embodies all of this with grace and a surprising amount of dignity, all of which helps make her ultimate turn into maniacal mania that much more devastating. 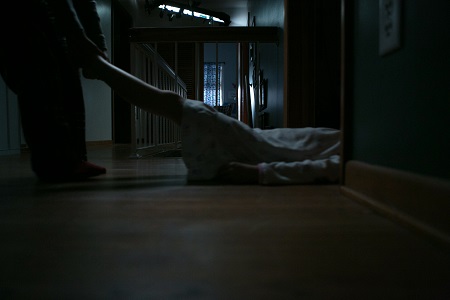 It doesn’t all work. The third act, when things really start spiraling out of control and where Maggie enters back into the picture, is at times a little problematic, the film coming perilously close to entering into Friday the 13th territory as far as how unstoppable the central menace out of nowhere suddenly becomes. There’s also some stuff involving a shadowy figure aiding the babysitter, what happens to him only transpiring because the plot needs something major to take place, not because it makes any rational sense whatsoever.

Even so, Emelie is a strong debut, Thelin showcasing some serious directorial chops as he maneuvers the narrative to its conclusion. He gets wonderful performances from both Bolger and Rush, while also orchestrating a handful of truly disturbing moments (one involving a python and a pet rodent is particularly effective) that had me squirming in my seat stewing in discomfort. It takes the babysitter-in-peril genre and spins it on its head with delicious ferocity, making it a horror opus I’d be curious to revisit as soon as the opportunity might arise. 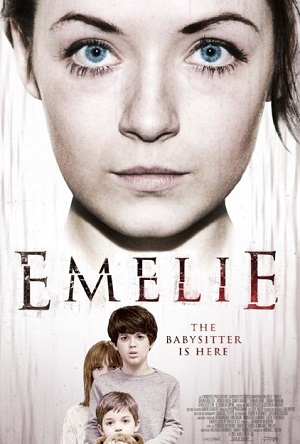