France’s Ernest & Célestine was up against both Disney’s Frozen (the eventual winner) and Hayao Miyazaki’s The Wind Rises for the Academy Award for Best Animated Feature. I had not seen it before the Oscars had been handed out so I couldn’t really say whether or not it deserved to be there. But I’d heard great things about this animated import adapted from the classic Belgian book series by Gabrielle Vincent, so to say I was excited to give it a look is something of an understatement while my hope it would live up to the hype was understandably substantial. 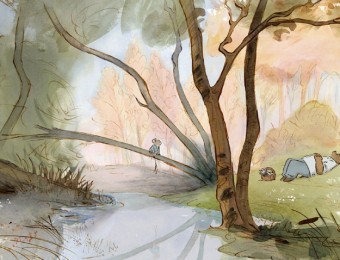 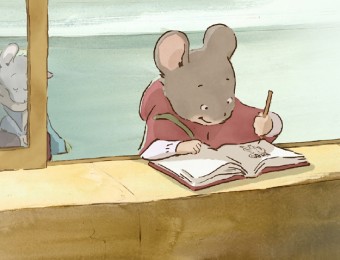 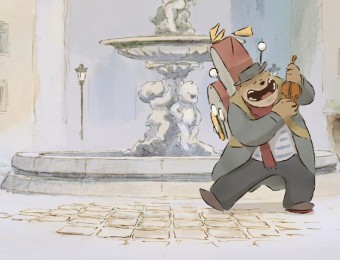 The Wind Rises was one of my top ten films of 2013. Frozen was in the top 20. I liked Ernest & Célestine better than both of them. This remarkable hand drawn enterprise is a delightful revelation, an emotionally pure journey into acceptance, friendship, sacrifice and family that held me captivated for every single one of its magical 80 minutes. It’s a joyous frolic inside a world of childhood imagination and adult-fueled whimsy, all of it having a timeless eloquence all its own that quite frankly blew me clean away.

Célestine (voiced by Pauline Brunner) lives with the rest of her fellow mice in a massive underground city. A dreamer who longs to be an artist but is tasked with growing up to become a dentist, she is sent every evening above ground to collect the teeth of children for reasons better left a beguiling mystery to be discovered.

Ernest (Lambert Wilson) is a hungry bear longing to be a professional musician even though the authorities in charge of his small township frown upon his compositions and dislike it when he performs in the public square. He lives above ground like the rest of his kind, eager to find a decent supper and not really caring where it comes from or who might supply it.

The pair should never have met let alone become friends, but for a variety of reasons that’s just what ends up happening. Taught to be afraid of one another, each goes against instinct (and the law of their respective lands) and begins to forage a relationship, each urging the other to explore their passions and discover exactly what it is they most want to accomplish during their respective lifetimes.

There’s more than that, of course, including both mouse and bear law enforcement agencies looking to bring Ernest and Célestine in to stand trial even if their crimes aren’t exactly, well, crimes. But in actuality there are no bad guys here, no nefarious plot driving things towards their conclusion. Only the simplest of narrative constructs matter, the relationship between the two principals and how they learn to construct a supportive family with one another at the center of it. Friendships matter, trust is essential, while learning, embracing and, in the end, celebrating the differences that make one unique the most priceless life lesson learned by anyone.

In many ways Ernest & Célestine reminded me of the writings of A.A. Milne (and Disney’s magnificent The Many Adventures of Winnie the Pooh) in the way he constructed childhood fables revolving around imagination, caring, community and friendship that in no way needed outside catalysts or influences to bring bits of unnecessary peril into the proceedings. There are also echoes of Miyazaki’s My Neighbor Totoro, the simplicity of the central structure as well as the narrative design in some respects more than reminiscent of that unquestioned masterpiece.

The look of the movie is as stunning as the storytelling itself proves to be. Radiantly crafted water colors in glorious pristine pastels populate things magnificently, the look and feel of it all rapturously intoxicating. Directors Stéphane Aubier, Vincent Patar and Benjamin Renner pace things with melodic grace, all of it moving like a delicate operetta audiences of all ages are certain to delight over. Ernest & Célestine, safe to say, is an almost instant classic, and by all accounts is a euphoric piece of animated cinema I’m going to be singing the praises of for many years to come. 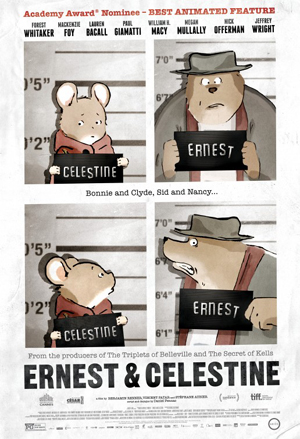