Eerie Ex Machina Blurs the Line Between Human and Machine

Caleb (Domhnall Gleeson), an up and coming programmer at search engine tech giant Bluebook, wins an internal, company-wide contest to spend a week with CEO Nathan Bateman (Oscar Isaac) at his secluded compound hidden deep within an icy wilderness. Initially excited, his enthusiasm is magnified when he learns why he’s been asked to join the cybernetic genius at his home, realizing immediately that his ending up in the man’s living room wasn’t as random as everyone else at the company was led to believe.

Frequent Danny Boyle collaborator Alex Garland (Sunshine, 28 Days Later) makes the jump from screenwriting to directing with his astonishing science fiction opus Ex Machina, a smartly constructed three-character drama that deftly asks complex questions with marvelous, disquieting intimacy. Drawing inspiration from any number of sources ranging from the Spielberg/Kubrick collaboration A.I., Fritz Lang’s immortal Metropolis and the writings of Harlan Ellison and Philip K. Dick (not to mention any number of episodes of “The Twilight Zone”) just to name a scant few, the movie is a thought-provoking miracle that is suspenseful, terrifying, illuminating and edifying all at the exact same time. It’s a magically entertaining experience, a dollop of pure cinema that works just as well for the tech obsessed as it does for the clueless layman just looking to have a good time.

Yet even these work more often than not, the whole last 20 minutes building in ferocious intensity before unleashing its shattering, emotionally complex conclusion. Aided in no small part by Geoff Barrow and Ben Salisbury’s (Exit Through the Gift Shop) sensational score and Rob Hardy’s (Shadow Dancer) gracefully unnerving cinematography, Garland shows himself to be a director whose control of his various plot strands is self-assured and confident. Ex Machina looks at the ghost in the machine in a way I can’t say I’ve seen before, the line between human and artificial blurred to the point it unsettlingly no longer exists. 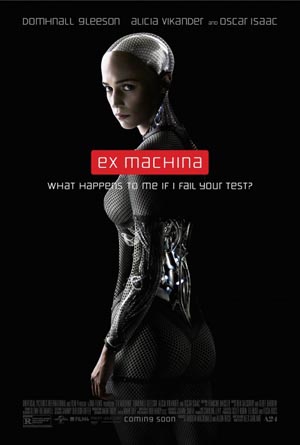