In an isolated farmhouse in the middle of the countryside, Francisca (Olivia Bond) is being instructed in the ways of life and death by her Mother (Diana Agostini), a former Portuguese surgeon who left that life behind to marry the young girl’s father (Paul Nazak). After a horrifying home invasion tragedy destroys all they hold dear, father and daughter move on with their lives as best they can, continuing to go through their various daily rituals all the while harboring an unimaginable secret deep within the underbelly of their barn.

Years later, an adult Francisca (Kika Magalhaes) continues as she always has, but when her father passes and her barn is suddenly empty, a hole opens in the young woman’s life unlike any she’s ever known before. Soon she is looking for something to fill that space. Francisca wants something, someone, to care for and to nurture, a person she can take under her wing much like her mother did for her, showing them the ways of the world though eyes that are as indescribably unique as they are eerily terrifying.

It’s safe to say there is little else out there like The Eyes of My Mother. As instantly mesmerizing a debut as any I’ve had the good fortune to come across this year, writer/director Nicolas Pesce bursting onto the scene with idiosyncratic relish and ferociously uncompromising tenacity. As if channeling the ghosts of Tod Browning and Mario Bava and combining them with the assaultive brio of Dario Argento, Takashi Shimizu and George A. Romero in their respective primes, he’s made a haunting sojourn into the heart of darkness that’s absolutely petrifying. This is an esoteric, brutally obdurate marvel, one filled with as many delights as it is horrors, everything building to a climax of absurdly disquieting abhorrence that had me shuddering long after the screen faded to black.

Making sense of it all is an admitted chore. Pesce is esoteric to fault, keeping things so nondescript and ephemeral that finding the point of all this casually gorgeous violence is decidedly difficult. There is no character building per se, just the vaguest ideas about who Francisca is and how the traumas from her past, the crazed influence of her father and the extreme isolation of the farmhouse have all conspired to make her what she now is. She’s an idea more than she is anything else, cinematographer Zach Kuperstein’s steely black and white cinematography signifying more about who and what this woman is, as well as who she is likely to become, than just about anything else in the motion picture does.

Yet, this is a movie more about how it makes the viewer feel than it is almost anything else, and on that level Pesce succeeds like gangbusters. Following Francisca around is observational perversity, her categorically undying need to make a personal connection with whomever she can whenever she can creating an aura of ubiquitous anxiety that seeps under the skin with the subtle grace of a mosquito sucking blood in the middle of the night. Seeing her troll area bars searching for someone, not exactly knowing who that will be or why she needs to, only to be beyond aghast when they’re scared to death once they realize what’s happening inside the walls of the barn adjacent to her home, it’s profoundly disturbing, and that’s only the beginning of the psychological devastation that will slowly unfurl as things progress towards the film’s final act.

I can’t talk about that last third for reasons that will become apparent to anyone watching the movie. Safe to say, it’s glorious, but it’s also disgusting. What Francisca does, how she decides to fill that hole in her life, it’s unquestionably unpardonable, making her a demonic creature who hides behind a wholesomely timid smile of friendship. Yet she is a demon who has no idea just how terrible she is, believing in her heart of hearts she’s doing good even if the truth is anything but. It’s a slow, delicate walk straight into the heart of darkness; the mirror image staring back so chilling it stops the blood cold. The Eyes of My Mother is a riveting, repugnant work of repellent art, Pesce crafting a gracefully unnerving calling card sure to be debated and discussed for some time to come. 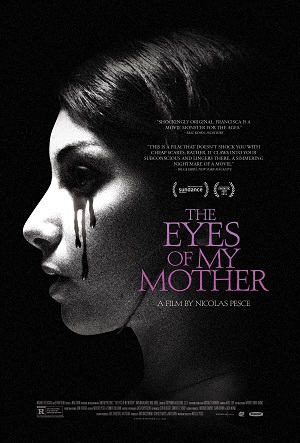