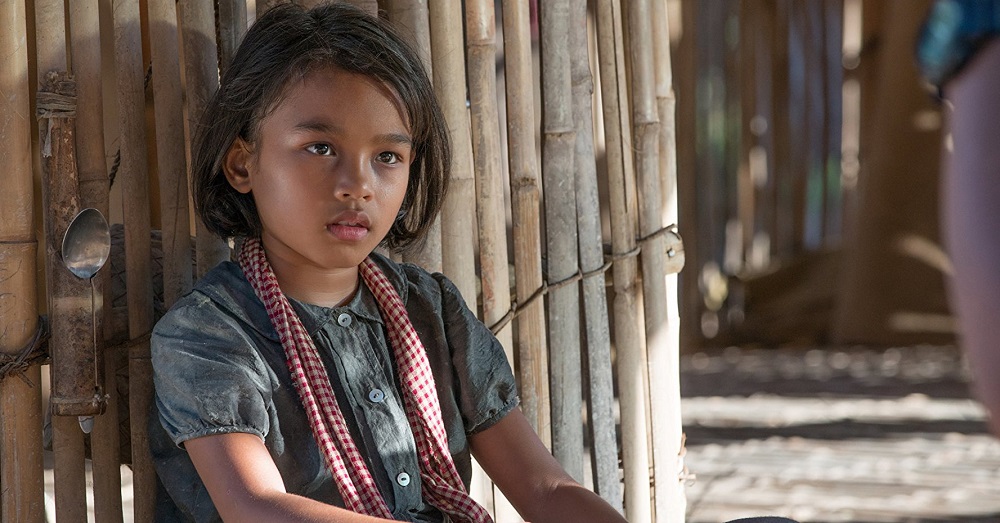 Visceral First They Killed My Father a Triumphant Story of Survival

Growing up in Phnom Penh, 5-year-old Cambodian Loung Ung (Srey Moch Sareum) has what many would consider a perfect life. Her loving father (Phoeung Kompheak) has a job working for the government that has allowed their family to prosper, and as such the little girl is as happy and as carefree as a child her age could ever hope to be. 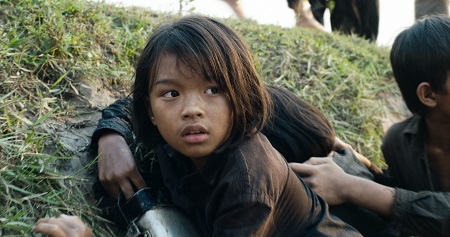 But Loung’s Pa knows darkness is coming, and when the Khmer Rouge invades the capital he knows he must do whatever possible to keep his family safe. Fleeing into the countryside, for a while they find sanctuary with members of their extended family. Yet the Khmer Rouge is unstoppable, and after the village votes them out in order to hopefully save their own citizens, Loung and her entire family are quickly captured. Her father and mother (Sveng Socheata) sent to work in the fields as glorified slaves, the young girl is placed in a class to be indoctrinated into the beliefs of the new regime. As Loung grows older, she is also turned out into the fields as a laborer, always maintaining the belief her family will be reunited and she will survive to see happiness once again.

It will likely come as no great shock to anyone that Angelina Jolie’s First They Killed My Father isn’t for the faint of heart. While lightness and love do enter the picture, mostly this adaptation of Ung’s best-selling 2000 memoir is an emotionally exhausting journey that strands the viewer in something akin to a constant state of shock. Reminiscent of Roland Joffé’s Oscar-winning 1984 classic The Killing Fields, this is still a devastating drama that builds to its uplifting coda of resilience, sacrifice and survival with dedicated tenacity, Jolie in the process delivering her finest film as a director yet.

In the majority of the scenes, young Sareum is a revelation. She is tasked with doing almost all of the heavy lifting, the child actress anchoring things with apparent ease. Sareum slips into Loung’s shoes effortlessly, her ability to convey a variety of emotions in the blink of an eye wondrous. I was struck by how playful she could be only to have unimaginable terror and doubt wash over her with startling restraint just a few seconds later, all of which makes the youngster’s long walk to freedom all the more empowering.

As for Jolie, she’s been a much stronger filmmaker right out of the box than I tend to think most give her credit for. Her debut In the Land of Blood and Honey might have been unrelentingly depressing and bleak, but that didn’t make it any less assertively made. Unbroken has a lot of problems, so many I’m not even going to start relisting them here, but it also had undeniable moments of greatness which allowed the triumphant story at its center to resonate more than it ever would have had the story been told by someone with a less steady hand. As for her exceedingly European Beyond the Sea where she costarred with her ex-husband Brad Pitt, that movie is aging rather well in my opinion, and had some elder male cinematic statesmen like Bernardo Bertolucci or Alain Resnais helmed it I can’t help but think it would be held in much higher regard than it currently is.

Even so, Jolie has learned a lot and grown as a filmmaker with each successive feature. This is her most mesmerizing effort yet, and the fact so much of it is presented without dialogue and yet the film retains its visceral enthralling power throughout makes what she has accomplished all the more impressive. Still, Jolie does like to overplay her hand, at least a little bit, and there are a handful of moments where she does beat the viewer over the head with just how bleakly abhorrent Loung’s situation undeniably was. But these moments are few and far between, and I can’t say any of them ended up bothering me all that much. 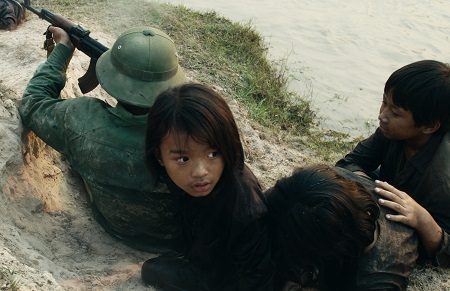 Granted, the Cambodian genocide by the Khmer Rouge is hardly the stuff of rainbows and lollypops, so expecting the director to gloss over parts of the story or underplay just how horrific things were for the youngster and her family isn’t just impractical, it would have been a gross dereliction of directorial duty on Jolie’s part as a storyteller had she done so. While this movie might not have any single scene that is as instantaneously impactful and shocking as the one in The Killing Fields where Dr. Haing S Ngor realizes he’s escaping to freedom by walking over a never-ending field of human remains, that does not mean there were not a number of moments where my heart leapt out of my chest. What Loung goes through over her years of struggle and sacrifice is unbearably extraordinary, Jolie doing a fine job maintaining perspective no matter how upsetting and unrelentingly ghastly events oftentimes became.

First They Killed My Father does move at its own methodical pace, and I do wish I’d seen this film in Toronto or during its theatrical run instead via a screener, cinematographer Anthony Dod Mantle’s (Slumdog Millionaire) astonishing visual compositions deserving to be viewed on the largest screen possible. Still, Jolie’s latest is a strong adaptation of Loung’s mind-blowing story, all of it anchored by a performance from Sareum that’s simply marvelous. This is a very good movie, and here’s my hope people make the choice to see it right away. 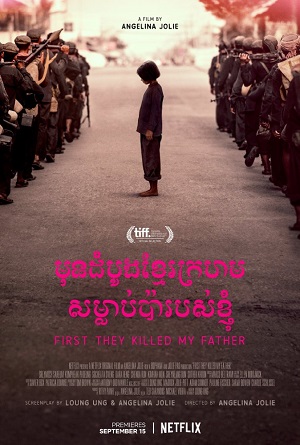