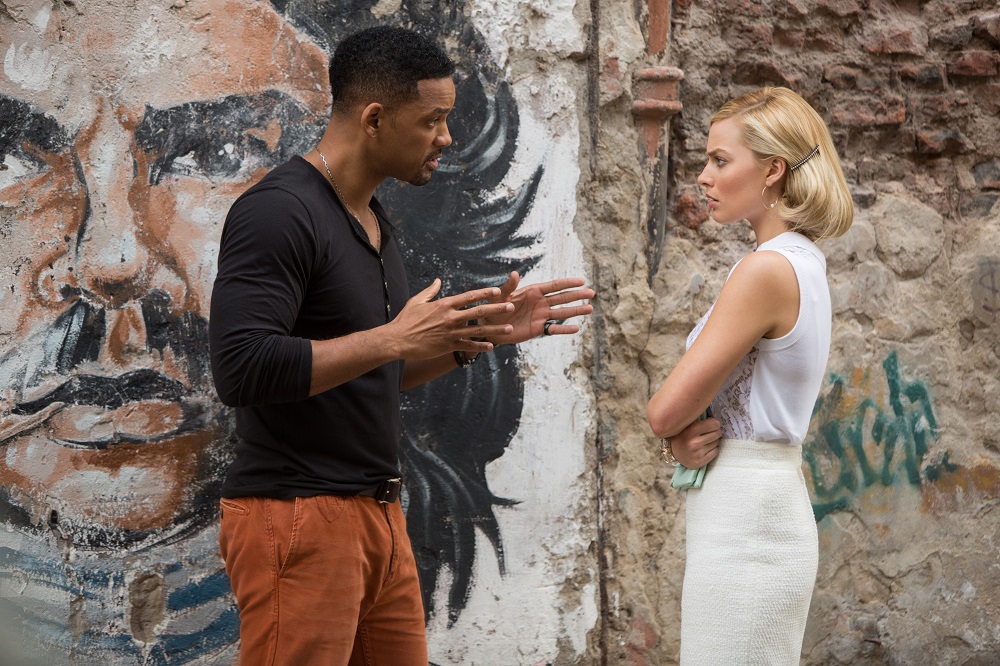 Veteran con man Nicky Spurgeon (Will Smith) knows from the first moment he lays eyes on Jess (Margot Robbie) she has the makings of becoming a star. Taking her under his wing, he teaches the beautiful young woman a variety of tricks, letting her hone her skills amongst the members of his crackerjack crew during the days leading up to a championship football game taking place in New Orleans. Jess just doesn’t rise to the occasion, she practically vaults over it, making it all the more painful when they part ways at the end of the week’s events.

Fast-forward three years. Nicky is in Europe working for millionaire playboy, automotive enthusiast and electronics wizard Garriga (Rodrigo Santoro), much to the chagrin of the man’s chief of security Owens (Gerald McRaney). Yet the setup itself is right up the grifter’s alley, his plans to take his employer’s competitors on a supercharger high-octane joy ride as simple as it is genius. But as good as it all looks, things go sideways when Garriga’s current girlfriend proves to be none other than Jess herself, Nicky suddenly out of sorts, unable to play with a full deck, his feelings for his former partner and pupil getting in the way.

The sleight-of-hand con artist thriller Focus is a tale of two films. The first is a tightly-wound, hugely enjoyable frolic into a world of pickpockets and scammers anchored by a pair of performance from Smith and Robbie that are as loose and carefree as they are passionate and fiery. Building to a terrific sequence involving a high-rolling gambler eager to bet on everything and anything, the writing/directing team of Glenn Ficarra and John Requa (Crazy, Stupid, Love) are on to something, melding pictures as diverse as The Sting, Rounders and The Grifters with a sensational dexterity that’s downright magnetic.

Unfortunately, the pair can’t maintain momentum generated by this initial half of their story. The secondary portion is a turgid, uninspired slog. Worse, not only does it make its main character something of a scowling, emotionally constipated bore, it also paints both Nicky and Jess to be far less intelligent than what the first half went out of its way to build them up to be. Topping it off, the twists, the turns, they’re all so clearly foreshadowed that they don’t surprise in intended ways, making the climactic sequences underwhelming to the point of frustration.

Robbie is hypnotic, and even when the film ultimately throws her character under a figurative bus there’s still something about her I couldn’t take my eyes off of. She oozes a sensual mystery tinged with an internal, mystifying regret I couldn’t help but connect to. More than that, she seems to be having fun, enjoying being part of this complicated craziness in ways her costars don’t entirely get the opportunity to emulate.

Not that anyone is bad. Santoro, McRaney, even the woefully underutilized Adrian Martinez and Brennan Brown (they’re two of the more trusted members of Nicky’s crew), all have some beautiful, positively magical moments, each attempting to make more of their respective characters than the film itself knows what to do with them. Best is a freewheeling, fiery to the point of being deranged B.D. Wong as the unrepentant gambler the team sets their sights on fleecing during the rambunctious first half. The veteran character actor is having a field day, flying by the seat of his pants, making his sequence crackle with stimulating electricity the remainder of the picture lacks.

As for Smith, there are constant hints throughout that reminded me of the superstar’s glory days, his initial introduction and unraveling of Jess as she unsuccessfully tries to put one over on him especially so. He still oozes charm like you wouldn’t believe, and I did like that the actor was willing to try and invest a level of pathos into Nicky akin to what James Caan was going through in The Gambler and Burt Lancaster was attempting to overcome in Atlantic City. Problem is, the guy is just so gosh darn morose, so constantly on the edge of what looks to be a nervous breakdown (mostly during the glum second half) spending time with him is hardly a hoot. On top of that, as appealing as he and Robbie are together, as things progress it becomes more and more difficult to believe why they’re so stuck on one another, dulling the impact of the third act fireworks a substantial bit.

I think what makes me mad is that it’s easy to see the movie that could have been. That introductory session is so good, so entertaining, so much blasted fun, to watch it all fall to maudlin melodramatic, intellectually stifled pieces is a major disappointment. Ficarra and Requa have capably constructed things from a technical standpoint, their filmmaking acumen hardly in doubt. It’s their screenwriting prowess I take issue with, both this and they’re debut directorial effort I Love You Phillip Morris showcasing a maddening inability to follow through on a solid premise and an intriguing first half. For a film entitled Focus this one’s lack of it is angrily upsetting, and had it been able to maintain any for even a modicum of its climactic arc I doubt I’d be near as irritated as I regrettably am. 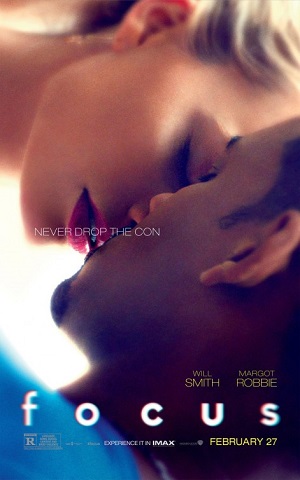