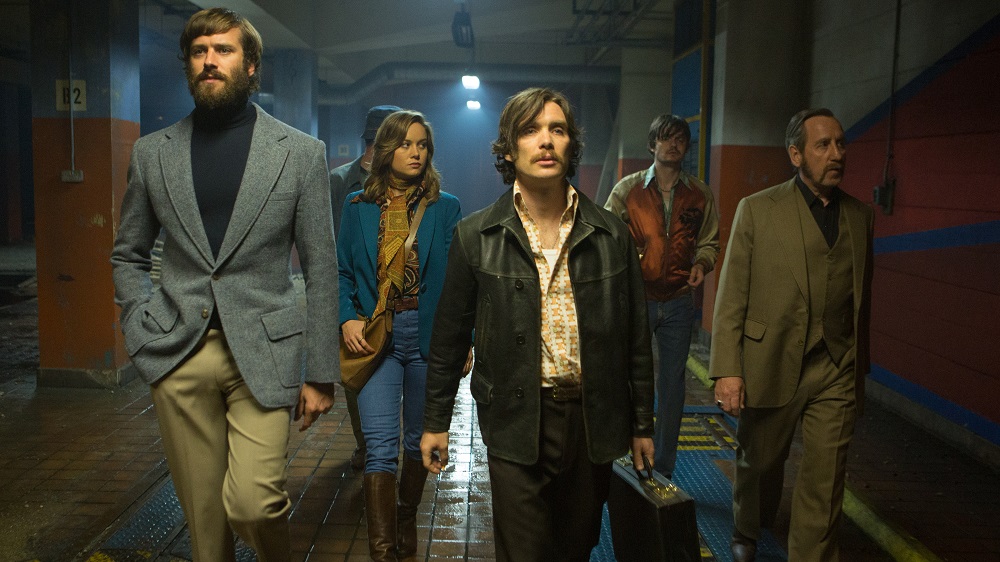 Justine (Brie Larson) has brought high-ranking I.R.A. members Chris (Cillian Murphy) and Frank (Michael Smiley) to a closed down factory in the middle of Boston nowhere in order to help facilitate a gun deal between them and nutty South African dealer Vernon (Sharlto Copley) and his quietly stoic partner Martin (Babou Ceesay). Standing between them all keeping the peace is the charming Ord (Armie Hammer), the friendly enforcer tasked with maintaining civility while also ensuring the deal runs smoothly and both sides walk away satisfied. 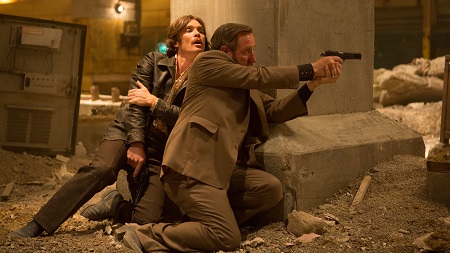 This proves impossible, however, after it is revealed that two men from each side of the deal, Chris’ driver (and Frank’s nephew) Stevo (Sam Riley) and Vernon’s henchman Harry (Jack Reynor), coincidentally meeting the night before, the bad blood brewing between them ready to boil over if no one is careful. But as potentially lethal as that might be, no one could have predicted either of them would be stupid enough to start something while transaction involving automatic weapons was going down. Yet that’s exactly the case, and soon everyone is hitting the dirt, diving for protection and pulling out their own guns in order to survive until the morning.

Bullets indeed fly in director Ben Wheatley’s (High-Rise, Sightseers) latest genre-bending free-for-all Free Fire, this raucous bit of surreal comedic mayhem and carnage a shotgun blast of violent insanity that’s an enjoyable hoot for every one of its rambunctious 90 minutes. Working once again with frequent co-writer and collaborator (and wife) Amy Jump, the filmmaker unleashes what has to be his most entertaining bit of madness yet. While this effort doesn’t reach the brilliant heights of the pair’s masterfully terrifying 2011 stunner Kill List, in its own unique way it’s nearly as satisfying, the balletic joy of watching events play themselves out to conclusion frankly wonderful.

Not that there’s a lot happening. The movie is all about a gun deal gone hopelessly wrong, the crux of the film’s running time consumed with how everyone attempts to navigate their way through this escalating madness as they crawl around the factory floor on their knees, hide behind cement blocks and lob verbal grenades back and forth. What makes it work is that Wheatley and Jump go out of their way to craft interesting characters, all of whom are completely different and thus stand out in their own uniquely interesting way. Better, they allow room for their actors to craft role as they see best, even those with the shortest screen time allowed the freedom to make the most of each line of dialogue or bit of physical action thrown their way.

Seriously, everyone here is terrific. Riley, Reynor, Ceesay, Smiley, Noah Taylor and Patrick Bergin all have signature moments that brought a smile to my face, while Murphy and Copley prove to be sensational livewires who appear to be relishing every single second they’re allowed to prance and preen their way around Wheatley’s bullet-riddled playground. Larson doesn’t just hold her own as the film’s solitary female protagonist, she oftentimes dominates with a mixture of assertive resilience and bewildered incomprehension as to how things could have devolved into carnivorous madness with such gruesome rapidity. As for Hammer, much like he did in The Man from U.N.C.L.E. the actor showcases a beguiling comedic virtuosity that’s as charming as it is sexy, his cocksure preening a joyous bit of narcissistic machismo that’s giddily spellbinding. 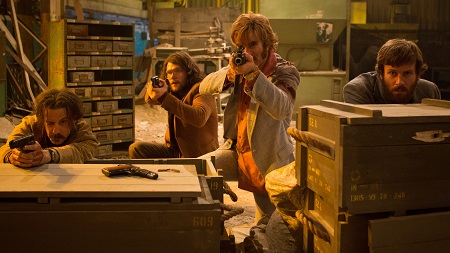 Wheatley conducts with confidence, the filmmaker doing a fine job of making sure the viewer has a solid idea of the factory’s architectural layout, that way when things fall apart the audience has a good concept of where people can go to hide and how far they need to crawl in order to even attempt to make it back to the front door alive. The action fireworks, as explosive as they might be, are nothing compared to the ingeniously vulgar bits of repartee he and Jump have crafted for the ensemble to sink their collective teeth into. It’s as if the two are channeling Quentin Tarantino, Charles Lederer and Armando Iannucci as far as the dialogue is concerned, the rapid fire nature of the four-letter based pitter-patter an abhorrently amusing delight.

It’s all pretty thin, everything playing out pretty much in real time with survival quickly becoming the objective, all other priorities falling to the wayside almost immediately. But that doesn’t make the movie any less enjoyable, the violent insanity of it all a kinetic fireball of mayhem and activity that’s a jovial, witty surprise that refuses to pull its punches and enjoys playing for keeps no matter what the cost. More importantly, Wheatley builds things to what might just be the most satisfying final moment I’ve had the pleasure to witness so far this year, Free Fire a crackerjack maelstrom of creative madness that’s a full-throttle merry-go-round of machinegun excitement. 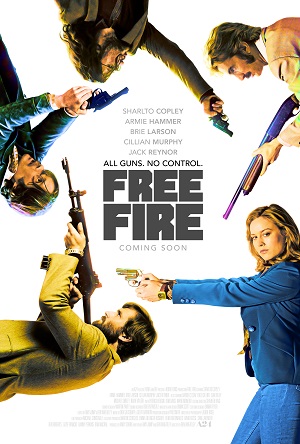