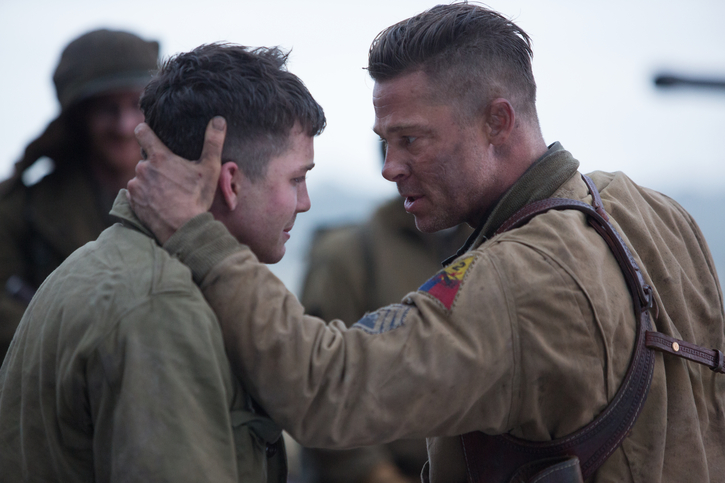 It is April of 1945. The war as it concerns Germany is drawing to a close. Against all odds, U.S. Army sergeant Don “Wardaddy” Collier (Brad Pitt) has managed to keep the majority of his tank crew – nicknamed “Fury” – alive. But a recent skirmish, which took out an entire platoon of tanks save his, did cost the life of his trusted assistant driver and primary machine gunner, a role that will need to be filled before he and his men embark on their next mission. 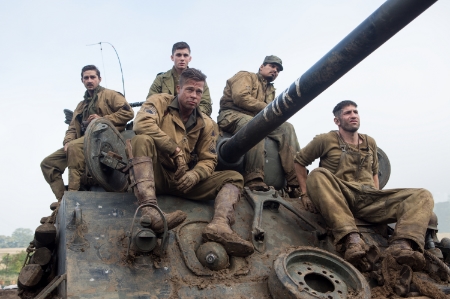 Enter Norman Ellison (Logan Lerman), a youngster trained as a typist who finds himself suddenly assigned to Fury even though he has no experience fighting a war, let alone driving a tank. Having promised his men that he will do all within his power to keep them alive, Wardaddy is faced with a problem he’s not entirely certain how to handle. Norman is a threat to his tank’s continued existence, and if he can’t make the young man battle-hardened within the next few days it’s unlikely any of them will survive the week, never mind actually make the final march into Berlin.

This moral dilemma is the heart of writer/director David Ayer’s (End of Watch, Sabotage) WWII drama Fury, the film an unflinching look at warfare and the soldiers stuck in the middle of it that never lets up, refuses to let go and isn’t afraid to linger on depictions of cutthroat brutality. Right? Wrong? These aren’t questions that are pondered, let alone asked, the men here maybe fighting for what they feel is a just cause, but that doesn’t mean they’re immune to unleashing unspeakable acts of violence upon those attempting to lay down their arms. It’s all about survival, nothing more, Wardaddy doing what he thinks he must to ensure those under his command see another dawn.

All of which makes the final confrontation between Fury and a platoon of 300 or so hardened German troops all the more vexing. I get the choice Wardaddy makes. I understand his reasoning. But in the grand scheme of the film itself it doesn’t make a whole lot of sense, he and his team essentially resolving to potentially lay down their lives for what they feel is an ephemeral “greater good” even though all of them have done the unthinkable (save maybe Norman, but even that’s a grey area) in order to go on living. It’s an odd decision on all of their parts (save, again, maybe Norman, his sense of right and wrong still not quite as diluted as the rest of the unit’s), and as compelling as events become, I can’t say I bought them as completely as I can only assume I was supposed to.

Be that as it may, this is as hardened and as compelling a look at WWII warfare as anything I can honestly say I’ve seen, in many ways even surpassing the opening D-Day sequences of Steven Spielberg’s Saving Private Ryan. Every time the tank goes into battle my gut hit the floor, the hair on my arms stood on end and my fingers made nervous indentations into my seat’s arm rests. Ayer makes things as claustrophobic as Wolfgang Petersen’s submarine classic Das Boot, as kinetic as the village assault in Terrence Malick’s The Thin Red Line and as communal as Samuel Fuller’s The Big Red One. The film rarely presses pause, refusing to kowtow to expectation or convention, letting events speak for themselves no matter how horrific or detestable they might end up becoming.

Attempts at making the tank crew three-dimensional don’t always work. There’s a sequence in a bombed-out German town where Wardaddy and Norman find a moment of quiet solitude in the home of a woman and her teenage niece (Anamaria Marinca, Alicia von Rittberg). This interlude starts with touching eloquence, moving with precision and grace, revealing bits and pieces of the tank sergeant’s backstory and history with minimal dialogue and less unnecessary embellishment.

But this scene goes on forever, building to essentially the only conclusion that it can, and while the outcome is key to Norman’s evolution and growth, getting there takes an almost obscene amount of time. More, there is the slightest hint of melodrama to what happens, and it’s arguably the only time composer Steven Price’s (Gravity) otherwise excellent score gets in the way, hammering home an emotional transition that’s so obvious it didn’t need the extra oomph Ayer for some reason decides to give it. 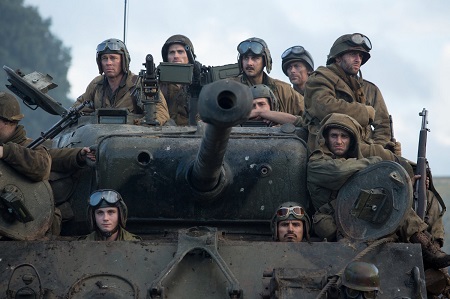 Every time the film gets into trouble, however, the actors save it. Pitt is superb, digging in, refusing to soften any of Wardaddy’s more gruesome and obscene edges. Lerman once again shows he’s one of the more soulful, internally complex young actors working today. As for the remainder of the tank’s unit, Michael Peña, Jon Bernthal and Shia LaBeouf are all terrific, the latter especially so, inhabiting his role as the team’s pious turret gunner so completely he disappears inside the character. Recent bouts of crazy notwithstanding, it’s not going to extremes to say LaBeouf is downright Oscar-worthy, giving such a full-bodied, all-or-nothing performance it’s hard to believe this is the same actor who achieved his fame on the Disney Channel over a decade ago.

Fury has issues, and I’m still not entirely certain what to make of the final moments, the director asking questions and bringing up new themes that heretofore hadn’t been introduced (or, if they were, I admit to not noticing them). But the movie is just so well made, so dynamically acted, so impossible to take one’s eyes off of for the entire length of its running time, these problems don’t feel as urgent or as damning as they otherwise would have in lesser hands. Ayer hasn’t made a great WWII film, but aspects of it certainly are; and even with a handful of misgivings this is one ride onto the battlefield I can’t wait to sit shotgun on for a second time relatively soon. 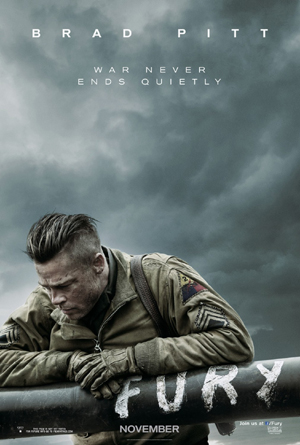