In 2019, a series of global climate disasters has humanity on the precipice of extinction. Combining their resources, led by scientific teams from the United States and China, overseen by satellite engineer and former astronaut Jake Lawson (Gerard Butler), the nations of the world fight back against climate change by developing a net of all-powerful satellites that can stop extreme weather in its tracks. Controlled by the International Space Station, this complex web is given the nickname “Dutch Boy,” its successful deployment saving countless millions of lives while also going a long way towards helping to rehabilitate the Earth’s damaged ozone layer after over a century of abuse.

Just weeks before the United States is scheduled to transfer management of Dutch Boy to an international oversight committee, an accident in Afghanistan leads Secretary of State Leonard Dekkom (Ed Harris) to convince President Andrew Palma (Andy Garcia) to send someone up to the Space Station to see what went wrong. But the only one with the requisite knowledge and skills is Jake Lawson, the project’s hero unceremoniously fired by his own younger brother, Max Lawson (Jim Sturgess), for gross insubordination to members of Congress three years prior. The siblings are forced to put the past behind them, however, as the problems with Dutch Boy are more monumental than they initially appear, and only with Jake and Max working together can they stop a madman from utilizing the weather to fundamentally change the map of the world, billions of lives in jeopardy if they fail.

Anyone buying a ticket to Geostorm should hopefully know what they’re in for. This is a motion picture where Gerard Butler basically punches weather in the face, doing so with extreme prejudice. A disaster movie in the vein of The Day After Tomorrow, Twister or Into the Storm only crossed with a political conspiracy thriller like The Parallax View or In the Line of Fire but with a technological aspect similar to Wargames, it’s all as grotesquely silly as it sounds. The directorial debut of longtime Roland Emmerich collaborator Dean Devlin, the pair teaming up on everything from Stargate to Independence Day to Godzilla to The Patriot, this effort is loud, obnoxious, ludicrous and idiotically puerile. It’s a live-action cartoon, those expecting anything different will certainly be in for a shock.

Granted, I’m honestly not sure how anyone could anticipate this film being anything other than what it is. The trailers sold it as such, even after Warner Bros re-engineered the marketing campaign in the wake of the tragic hurricanes that hit Texas, Florida and Puerto Rico, emphasizing the political thriller aspects over the weather-related disaster pyrotechnics. There’s also the fact Geostorm has been in the can for over a year, the studio going back to the drawing board, reshooting large portions with uncredited blockbuster producer Jerry Bruckheimer brought in to oversee all of the changes (which probably explains the similarities to Armageddon).

With all of that being so, gosh darn it if I came close to enjoying this piece of idiotic lunacy almost in spite of itself. Playing like some mid-budget Hollywood Pictures genre programmer from the early 1990s, Devlin’s effort, unlike his collaborations with Emmerich, refuses to take itself too seriously, at times playing like a parody of the films they’ve made together more than a straightforward addition to their combined filmography. It’s like the production is constantly winking at the audience, hoping they’ll be all right with being in on the joke, the countless absurdities building one upon the other sort of spectacular in their own gloriously asinine imbecilic purity. 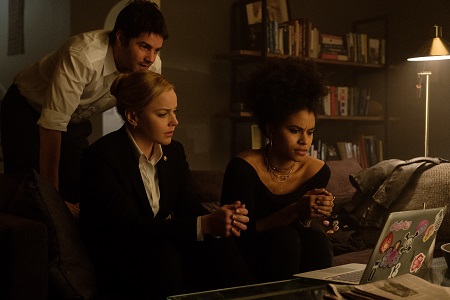 Even so, Devlin and Paul Guyot’s screenplay is a mess, so many implausible elements crashing into one another it is impossible for the center to hold, the movie collapsing under its own weight long before the two Lawson brothers can save the day. Great actors like Harris, Garcia and Abbie Cornish (who thankfully also has killer supporting role in Three Billboards outside Ebbing, Missouri to remind us just how terrific an actress she is) all make the best of what they’re asked to do, even though each appears slightly embarrassed that they have to do it. But they’re better off than the cadre of international character actors making up the remainder of the cast, and while their diversity is impressive, the fact none of them get to do much more than sit around and get barked at by Butler makes their impact upon the proceedings rather negligible to say the least.

Yet I’d be lying if I didn’t admit to giggling madly through the majority of this bit of B-grade hokum. There’s a set piece in the middle of a lightning storm in Orlando, Florida where Max, President Palma and Cornish’s Secret Service Agent are escaping from a handful of assassins as cars explode and freeways collapse all around them. It’s as goofy as it sounds, but Devlin orchestrates the sequence marvelously, all the madness and mayhem having a kinetic absurdity that’s a heck of a lot of fun. If the rest of the movie could have achieved the same sort of vigorous zeal, Geostorm might have risen to being a not-so-guilty pleasure worth crowing about. As it is, it’s still not half-bad, and if that doesn’t make this special effects-filled disaster opus worth the ticket price, it might just make it worthy of giving a look to on a rainy afternoon while folding laundry when it inevitably ends up on Cable television. 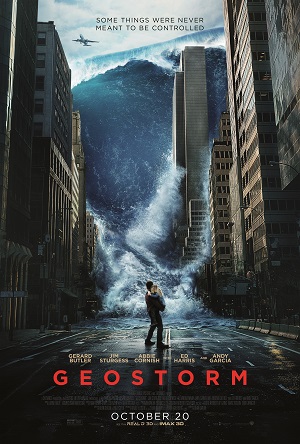