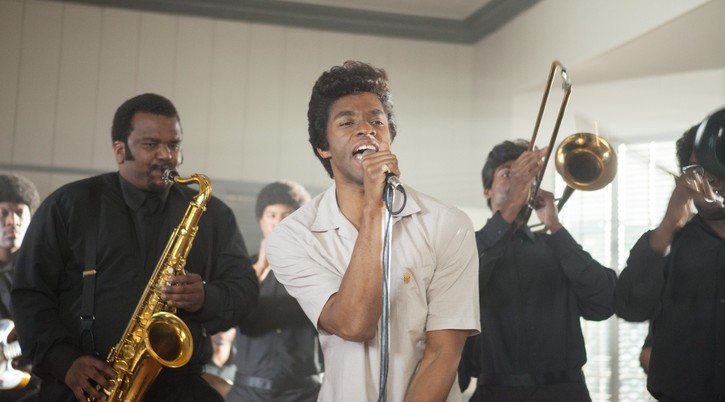 Boseman Electrifies in James Brown Biopic Get On Up

Get On Up is a better overall movie than The Help. For director Tate Taylor, it is a massive step forward – as his control over the inherent melodramatics at the center of his electrifying biopic about music legend James Brown is far more self-assured and confident than it was for that Civil Rights era soap opera. Cinematically speaking, the tone is more spot-on, the pacing less languid and the overall vibes being put out by the picture itself are far more consistent. Get On Up shows a filmmaker coming into his own, and as such is without a doubt one of the summer’s more spirited and enchanting surprises.

At the same time, I’d be lying if I didn’t admit that, for all its faults, for all its sensationalistic and over the top aspects, that 2011 Oscar-winning box office smash, is still slightly more entertaining than Taylor’s latest opus ends up being. Maybe it’s the fact he utilized his entire, mostly female, cast to such exquisite perfection. Maybe it’s just because that story wasn’t encumbered with having to deal with little things like facts associated with a world-renowned superstar. Or maybe one can’t discount the humorous attributes of a pie made of feces utilized with shocking, self-effacing glee, the gross-out hysterics of that one sequence taking the poop joke to an unforeseen plateau few – or, at least me – ever could have anticipated.

Unfortunately, Get On Up, for all its strengths, of which it has many, doesn’t resonate with quite the same intensity or passion. It’s oddly distancing, and not until the terrific, powerfully cathartic, movingly emotional scene of friendship renewed and forgiveness granted did I ever truly care about Brown’s journey from dirt-poor South Carolina child to international Funk, R&B and Soul superstar. 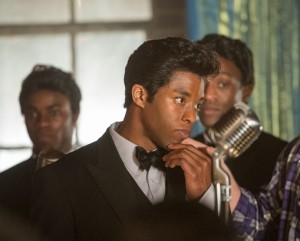 This might be because unlike in The Help, as well cast as Get On Up is the supporting players, save one notable exception, do not make much of an overall impact. Octavia Spencer appears in what’s little more than a cameo as a somewhat kindly bordello matron who takes a young James Brown into her care, while Lennie James barely has enough screen time to register as the belligerently violent father who leaves him for a new life in the military. Faring a tiny bit better is none other than Dan Aykroyd as recording label promoter Ben Bart, but that’s only because his central scenes have substantial bearing on Brown’s journey and not because they’re especially revealing from a character perspective.

As for Viola Davis, appearing as the mother who abandoned her child in the face of unspeakable hardship and abuse, she brings a great deal to her limited scenes, that is true; but again they’re all so brief, melodramatically obvious and more than a little cliché that they never have the emotional impact they require.

That’s the bad news, and while it’s substantial, it also isn’t a killer. Why?

First off – and this is hardly shocking – the music is incredible. Taylor weaves the evolution of Brown’s sound with consummate skill, everything continually building and evolving in ways that are magnetic, almost hallucinatory, giving the proceedings a melodious intensity that suits both the story and its subject perfectly. The film is a sensory and auditory marvel right from the jump, and keeping from bolting up in the middle of the theatre to dance like an uninhibited madman is oddly difficult.

The second thing that sets Get On Up apart from the crowd is the supporting performance by Nelsan Ellis. Arguably best known for his work on “True Blood,” the actor is a revelation as longtime Brown compatriot and friend Bobby Byrd. Ellis brings real weight to his portrayal, his quiet dignity revealing layers upon layers of hidden triumphs and regrets, both mixed together with winsome, almost tragic eloquence. There is a pathos and a pain to his performance that’s continually mesmerizing, making the flashing of a smile or a giddy gleeful exclamation reverberate all the stronger because of that fact.

Yet the real reason the movie ends up making the impact it ultimately does is entirely due to star Chadwick Boseman. As good as he was as Jackie Robinson in 42, as easily as he stole scenes in the otherwise forgettable Draft Day, none of that compares to his outright brilliance as James Brown. This is a magnificent, full-bodied piece of work driven by interior demons and emotional catastrophes that pole vault from one extreme to another, Boseman bringing all of them to life with spectacular, mesmeric ease. He’s alive in ways that are barely definable, let alone easily classified, giving the film heart, attitude and most of all soul as it builds to its tenderly shattering conclusion. 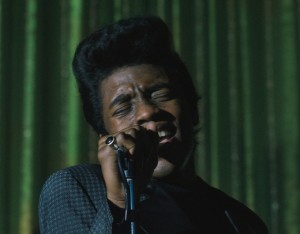 Taylor doesn’t escape all the trappings of the genre, and, as already stated, I can’t help but wish he’d utilized his powerhouse supporting cast more astutely. But I love the fact that neither he nor screenwriters Jez and John-Henry Butterworth (Edge of Tomorrow) shy away from the darker, more loathsome aspects of Brown’s life story. Better, they don’t sensationalize these moments, allowing the audience to make up their own minds as to what was going on inside the music icon’s head as he does the unthinkably odious. Melodrama is kept to a minimum and as such allows for a more three-dimensional, thus human, rendering of the character, all of which when combined with Boseman’s powerhouse performance makes for a savagely fierce and fiery feature whose flaws are easy to overlook.

Get On Up isn’t perfect. I admit not all of it comes together nearly as nicely as I wanted it to. But Boseman is so tremendous, and Taylor’s overall direction is so confidently assured, enjoying the picture for what it is and not for what I hoped it would be is a relatively foregone affair. Get On Up has got heart and it’s certainly got soul, making singing its overall praises an extraordinarily easy thing to do. 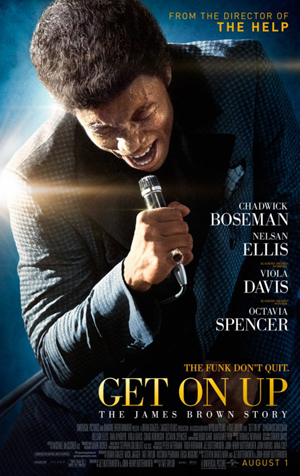