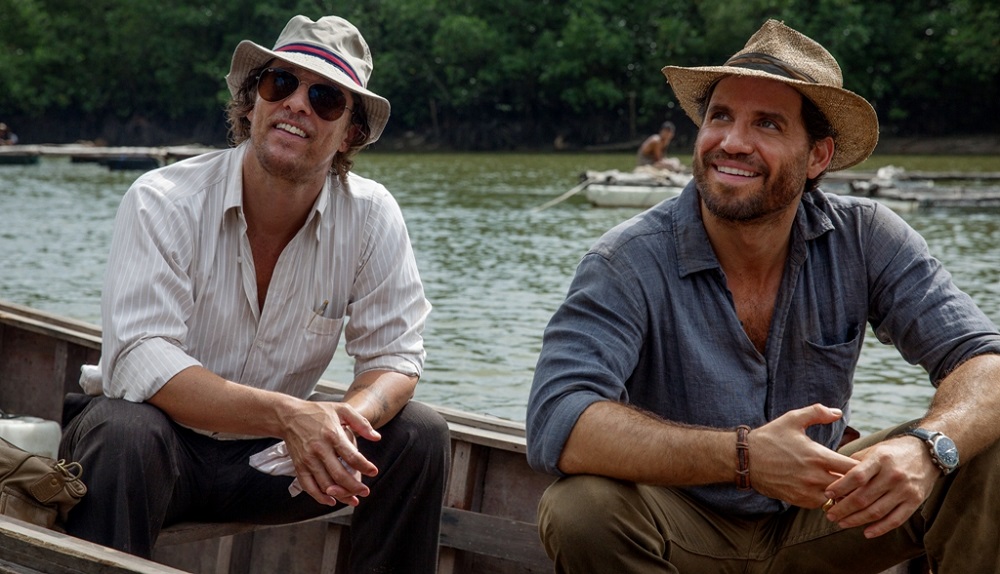 Kenny Wells (Matthew McConaughey) comes from a family of prospectors, his grandfather striking it rich in the middle of the Nevada wilderness and ultimately setting up a small but successful mining business in Reno. Nearly six decades later and after taking over leadership of the company after the passing of his own father (Craig T. Nelson) from a sudden heart attack, Kenny is down to his last dollar. With things looking bleak, with the business’ stock price falling to pennies on the dollar, this wild man who once had a nose for gold sells everything he has of value and heads to Indonesia on a hunch. He’s going to meet up with geologist Mike Acosta (Edgar Ramirez), and together they’re going to do something that the whole world will be talking about for years to come, consequences be damned. 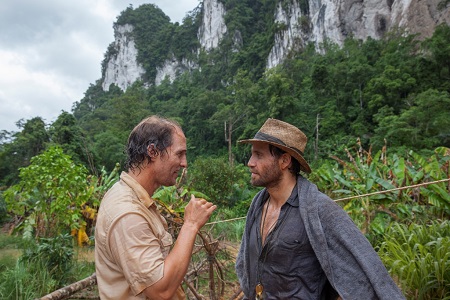 Loosely inspired by real events, Stephen Gaghan’s (Syriana) satirical drama Gold plays like some sort of bug-eyed, whiskey-swilling love child of The Wolf of Wall Street and The Big Short. Set at the tail end of the 1980s, it’s a what-if piece of can-do entrepreneurial spirit mixed with Wall Street greed crossed with intelligently underhanded sleight of hand. Most of all, it is a movie built on an unlikely friendship, Kenny and Mike coming from different worlds yet still able to reach a level of understanding and camaraderie that allows the appearance that they’ve done something extraordinary to cheerfully arise. They are the beating heart that drives everything that transpires over the course of the film, this bond that develops between the two concrete and sincere.

Appearances are deceiving, however, and as complex as their relationship might be, the actual happenings lurking at the center of Gaghan’s film are much more serpentine. What starts as a crazy idea of gut instinct gone haywire on Kenny’s part suddenly morphs into what is potentially the largest gold strike in decades, investors and Wall Street bankers suddenly falling over themselves to get in on the action. Fortunes come, and fortunes go, and what looks like a sure thing for all involved also catches the eye of the F.B.I., things going from uncomfortably tenuous to inconceivably awesome to horrifyingly scandalous in what seems like the blink of an eye.

In some ways Gaghan, working from a script by Lara Croft: Tomb Raider screenwriters Patrick Massett and John Zinman, wants to tell a cautionary tale reminiscent of what ends up happening to Humphrey Bogart and Tim Holt in The Treasure of the Sierra Madre. In another, he wants to rip American bankers and stock brokers a new one much like Martin Scorsese did with The Wolf of Wall Street and Oliver Stone managed with Wall Street. Then there are the crazed jungle adventure aspects that play like a half-assed variation on Werner Herzog’s Fitzcarraldo, what that all adds up to heck if I know.

Thing is, I don’t think the filmmakers do, either, the tonal shifts happening throughout happening with jarring suddenness creating a sense of structural unease the film has trouble figuring out what to do with. As terrific as Gaghan’s Syriana might have been, he doesn’t appear to have any idea how to mix the comical, topical, dramatic and satiric elements in ways that are either edifying or rewarding. Instead, there is an unfocused whirlpool of emotional excess that is created in all of this zaniness that only occasionally hits the right notes, building to a conclusion that’s too ephemeral to be even vaguely agreeable.

Not that Gold is a lost cause. First things first, McConaughey is superb, transforming himself completely and in every way imaginable to play the character. His a slithery, chain-smoking mess, fast-talking his way through every situation as he tries to reach something close to the same level of success his father and grandfather did before him. It’s a sweaty, monumentally fascinating performance, one that showcases the actor very near the top of his game, McConaughey fearlessly going for broke as he makes a variety of decision running the gamut between selflessly heartfelt and selfishly callous while also making a number of intriguing pit stops along the way. 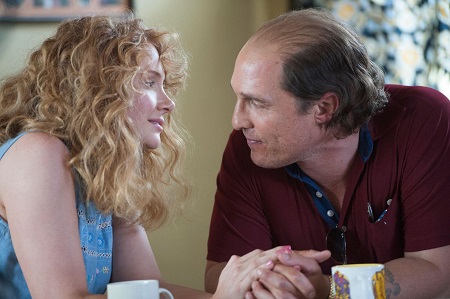 Ramirez is also excellent, and I just loved how he managed to play things so close to the vest yet still manage to make Mike a richly textured character overflowing in intriguing complexities. Bryce Dallas Howard is also very good as Kenny’s long-suffering girlfriend Kay, her reactions and careful analysis of her beau’s sudden good fortune and the potential misery that could come from it movingly heartfelt and perceptively spot-on. Finally, there’s also a nice, if much too brief, appearance by Bruce Greenwood as a mining conglomeration bigwig that’s loose, cagey and filled with eccentric charm, and it’s a major pity the movie doesn’t do more with him than it ultimately does.

The rest of the talented cast, including Nelson, Corey Stoll, Toby Kebbell, Bill Camp, Macon Blair, Stacy Keach, William Sterchi and Rachael Taylor, are unfortunately more or less wasted, all of them adding a bit of color to the proceedings but little of actual substance. There’s just enough going on in Massett and Zinman’s script for any of them to latch onto and make their own, each doing the best with what they have even if what’s actually there is hardly worthy of their collective efforts.

I always feel bad coming down on a film like Gold. Gaghan’s latest is a risky venture with a lot on its mind, mixing fact and fiction together to come up with a cinematic mirror that reflects back to the viewer topical images that aren’t always easy to witness. The thing is, if the combination isn’t right, if the balance is off, then good intentions and lofty ideals don’t end up meaning a single thing substantive, making the finished feature nothing more than celluloid pyrite barely worth the cost of a rental let alone a full-blown first run multiplex ticket. 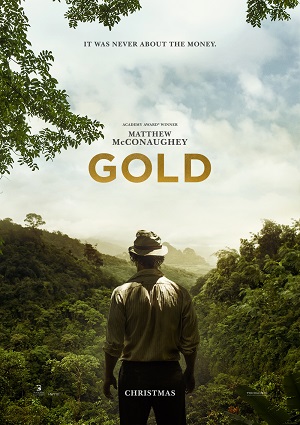