“You have to get through your fear to see the beauty on the other side.”

“Roughly 65 million years ago, an asteroid flung out of the deepest reaches of space barely missed striking the planet Earth by the slimmest of margins, burning through the night sky like a shooting star hurtling towards oblivion. A few million more years later, a loving pair of long-necked dinosaurs (voiced by Jeffery Wright and Frances McDormand) prepare for the three eggs they’ve proudly guarded to hatch, waiting with baited breath for their children to arrive. The kids, Buck (Marcus Scribner), Libby (Maleah Nipay-Padilla) and Arlo (Raymond Ochoa), are happy to help their parents work their farm, each hoping to one day follow in Poppa and Momma’s giant footsteps, eager to make a lasting mark worthy of remembrance.

The erstwhile runt of the trio, Arlo has trouble combating his fear of the great big world and all the inherent dangers that mysteriously lie within it. After an unspeakable tragedy, he finds himself stranded an unknown distance away from home with no one to help him. Forced by circumstance and curiosity, he slowly begins to make friends with a strange, manic creature of pinkish skin, two legs, two gangly arms and relatively little hair anywhere on his body save atop his head. Nicknaming him Spot (Jack Bright), the two begin the long journey back to the farm, learning to work together as a team as they encounter a number of unforeseen obstacles, not to mention a flock of high-flying predators, all intent on stopping them from reaching their destination.

There’s not a lot to Pixar’s latest animated endeavor The Good Dinosaur. This is basically your average boy-and-his-dog coming of age tale, only in this case the “boy” is a dinosaur and the “dog” is the boy who befriends him like a loving pet. While the idea that the asteroid that caused the dinosaurs to go extinct actually missed its target is a fun one, honestly I can’t say the film’s five credited writers do anything novel with it, Meg LeFauve’s (Inside Out) finished script far more rudimentary and straightforward than I initially anticipated it would be.

Yet that simplicity is what ends up making the movie kind of wonderful. It focuses intently on Arlo and Spot’s relationship, allows them to learn to communicate without words while developing their budding friendship with intimately grounded grace. It’s sort of a prehistoric The Black Stallion, allowing silence and movement to speak volumes, rarely over-explaining what is going on, understanding the children sitting in wide-eyed, rapt attention can put the majority of the pieces together for themselves. I also loved how the story beautifully looks at the relationship between fear and courage, doing so in a way even the youngest viewers can understand, everything building to a superb coda of acceptance and sacrifice that had me happily reaching for the Kleenex.

The best bits are when the film becomes a full-on Western, Arlo and Spot teaming up with a trio of Tyrannosaurs (the patriarch of which is voiced by a marvelous Sam Elliott) on an erstwhile cattle drive where they’re all forced to stave off an attack from some feathered raptor-like creatures determined to steal the herd. Not only is the sequence spectacularly animated – no shock there – but it is also lovingly introspective, the filmmakers delivering bits of insight that are wryly profound. I loved this subplot, enjoyed each and every second of it, the payoff featuring this oddball quintet sitting around a roaring campfire talking about their lives just about perfect.

For Pixar, this is pretty simple stuff, never making the attempt to rise to the same sort of heights Inside Out, Wall•E, Toy Story 3 and a small handful of other favorites have so magnificently risen to in the not-so-distant past. But that’s okay. The Good Dinosaur is a children’s fable that is more than content to be exactly what it is and little more. None of which means adults won’t find plenty to cherish, they just won’t latch onto it as strongly as younger viewers undoubtedly will, and for my part I have no problem with that whatsoever.”

True Lies About Dinosaurs (1:56) – A far too-brief look at the world of dinosaurs depicted in the film and what we as human know (and do not know) about them here in the real (i.e. non-animated) one.

The Filmmakers’ Journey (7:54) – Wonderful, if again much too short, featurette looking at the behind-the-scenes machinations that allowed this film to see the light of day.

Every Part of the Dinosaur (6:08) – Excellent short chronicling the character designs. Superb.

Following the T-Rex Trail (6:58) – The Pixar gangs hits the trail to get a feel of what it must have been like to be on a cattle drive as they visit a working ranch for inspiration.

Deleted Scenes with an Introduction by Director Peter Sohn – Three of them. Worth a look.

I really enjoy The Good Dinosaur, and while the film is far from Pixar’s best it has a pleasing, universal quality that’s virtually impossible to deny. Disney Blu-ray release is excellent across the board, technical specifications exemplary while the special features are suitably impressive. This is a movie kids will watch over and over again without likely tiring of, while adults will find just enough of merit hiding within to make viewing it more than once not the chore it potentially could have been. Recommended. 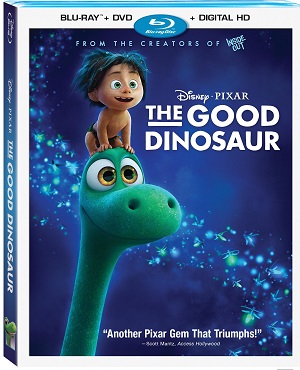