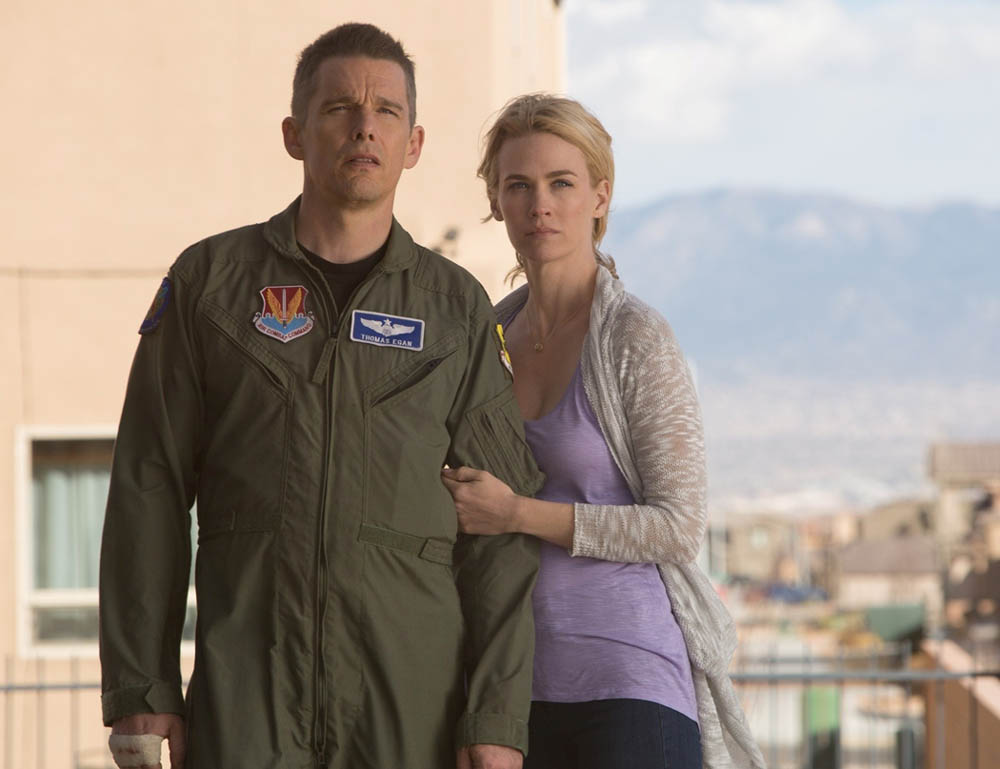 Major Thomas Egan (Ethan Hawke) is one of the best pilots in the Air Force. After six tours flying missions in the Middle East, he’s the kind of guy you want in the skies above, willing to do whatever it takes to see every job accomplished and each soldier under his watchful eye return home safely.

Yet he’s been mothballed all the same, stuck on assignment in the Nevada desert just outside of Las Vegas working for Lt. Colonel Jack Johns (Bruce Greenwood) as the primary drone pilot for combat operations in Afghanistan. Still fighting the same war, only now doing it from several thousand miles away, he discovers the moral gray area these missions require him to navigate through are exacting a heavy toll. Now breaking in a new copilot, Airmen Vera Suarez (Zoë Kravitz), while also having to take clandestine assignments from the CIA, things are reaching a point of no return, his mental state so withdrawn and tattered wife Molly (January Jones) is at her wits end.

No one is going to accuse Good Kill writer/director Andrew Niccol of subtlety where it comes to his latest drama. The man behind features as diverse as Gattaca and Lord of War, his focus now turns to the debates involving drones and their destructive capabilities. More than that, he wants to see what is happening to the crews tasked with carrying out missions where collateral damage is a virtual given, their mental and physical states after completing countless sorties of varying impact and importance what he is most interested in examining.

This he does in exhausting detail, doing all he can to flesh out Egan in a multitude of ways. Granted, the man is fairly damaged right from the start, a not-so-subtle alcoholic who loves his wife and two children yet hasn’t the first clue as to the best way to relate to or interact with them. He’s further from them now that he’s living with them at home than he ever was when he was a world away in mortal danger, the fact he has no actual skin in the game doing his current job something he can barely stomach let alone comprehend. 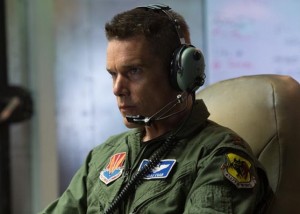 It’s always nice when Hawke gets the chance to connect with a character, to disappear inside a role, because even with two Oscar nominations for acting (Training Day, Boyhood) under his belt, it’s far too easy to forget just how terrific a talent he is. Even though the struggles his Egan is facing are as timeless as can be (films as diverse and as far apart as All Quiet on the Western Front, The Best Years of Our Lives, Platoon and American Sniper have been trading on them for decades) he still manages to make them feel fresh and immediate. He takes the melodramatic clichés inherent to the character and spins them into gold, crafting a heartbreaking portrait of a good man – and a better soldier – teetering on the edge of sanity that is consistently gripping.

For his part, Niccol doesn’t seem to be all that interested in concealing his point of view. While he does make the attempt to showcase the good that drones can do – there’s a terrific little bit where Egan and Kravitz find themselves playing watchful guardian for a tired troop of soldiers in desperate need of a few hours rest – his point in regards to the current usage of the machines is hardly heartwarming. The film is filled with moralistic discussions about how destroying “bad guys” abroad is preferable to the alternative, the weighing of how much collateral damage is okay and how much is abhorrent a debate all the characters engage in multiple times over.

Yet for all the didactic sermonizing, Good Kill works. It works because the characters live and breathe. It works because the visual compositions have an unsettling universality to them that transform American suburbia into inhospitable Afghani wasteland with striking, nerve-wracking ease. It works because all of the actors, including Jones, who’s seldom as terrific as she is here (not even on “Mad Men”), do subtly dexterous work no matter how maudlin or on-the-nose-long stretches of their debates and discussions might turn out to be.

Most of all, though, it works because Niccol, for all his speechifying, doesn’t actual spend a ton of time preaching, allowing circumstance and situation to speak for itself in ways that are emotionally profound. His documentary-like approach suits the material beautifully, allowing for a naturalistic ebb and flow that’s persuasive. On top of that, he honors the soldiers while deftly still calling the mission into question, never belittling their decisions even as he heaps scorn and accusation on the heads of those coldly and callously giving the orders to attack. Good Kill isn’t a direct hit, but it does speak its mind with forthright tenaciousness, Niccol searching for truths on a bloodied battlefield disinterested in revealing a single solitary one of them. 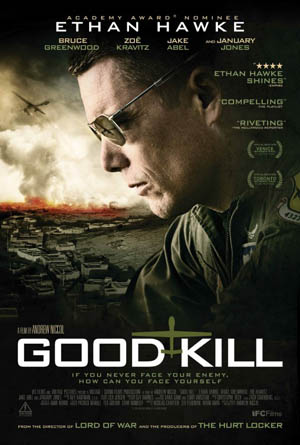