Romeo Aldea (Adrian Titieni) is a small town Transylvanian doctor barely able to contain his excitement. His teenage daughter Eliza (Maria Dragus) is about to graduate with honors, and if she can pass her final exams with the anticipated high scores, she’ll earn a full ride to attend university in the UK. But on the eve of these pivotal tests, she is attacked on the way to school, leaving her a frazzled mess unsure if she has the psychological wherewithal to deliver the necessary scores required for her to earn the scholarship.

Romeo is understandably worried. He knows the best thing for Eliza, whether she realizes it or not, is to leave this battered and bruised country for a better a life, this opportunity to study in the UK not something to be taken lightly. But the doctor has tried to instill in his daughter a commitment to doing the right thing, that living life as honestly as possible is always the way to go no matter what the circumstance. Here, however, there are things as a father he knows he can do that will ensure Eliza will pass, solutions to her potential problems that are common in this corrupt town, all of which he has vowed to never stoop to no matter what the circumstance.

This is the setting for acclaimed, award-winning Romanian writer/director Cristian Mungiu’s latest meticulously mounted and bracingly personal drama Graduation, and much like 4 Months, 3 Weeks and 2 Days and Beyond the Hills this isn’t exactly the most uplifting motion picture a person is likely to watch anytime soon. And yet, also like those two, it is a masterfully composed effort that is instantly fascinating, moving towards its emotionally hushed conclusion with breathless, if still unhurried, intensity. More, it is slightly more hopeful than anticipated, Mungiu ending things in a way where Eliza’s future is placed decidedly into her two hands and those hands alone.

Not to say there’s any sort of confirmation as to what it is she’s going to do. The way Mungiu orchestrates things Eliza’s decisions remain her own. More, because the movie is almost entirely seen through Romeo’s eyes, she remains a compelling enigma throughout, going through the typical maneuverings of teenage growth and angst but doing so against a backdrop of unimaginable dishonesty and threats of senseless violence. Because of that, beauty and kindness are difficult to find, the wariness Eliza feels post-attack permeating every interaction that takes place from that point forward, and not just the ones involving her.

It really is Romeo’s story, though, this driven father obsessed with doing what he feels is best to secure his daughter’s future. Yet, for all his bluster that Eliza needs to be upstanding and honest not matter what the situation, he’s not exactly living his life the way he has always gone out of his way to imprint upon her that she needs to. Not only is his marriage to the girl’s mother Magda (Lia Bugnar) is a mess, the two barely able to speak to one another in the morning let alone comfortably embrace as husband and wife. But he also has a mistress, Sandra (Malina Manovici), and even better she’s his most trusted associate at the hospital and family friend. While a good man who is fair, just and treats all he encounters with respect and kindness, he’s also something of a hypocrite, this realization hitting Eliza with practically the same fearful force as that pre-school day assault did.

Mungiu’s presentation is cinematic yet still intimately personal. Working with cinematographer Tudor Vladimir Panduru, the visual look of the film is massive, the camera moving in ways that are as stylishly composed as anything out of a David Lean or Stanley Kubrick epic. Yet the focus always remains tightly joined to the characters, with Romeo constantly at the center, each twist and turn leading him to places he never imagined he’d ever allow himself to be lead towards. It’s gorgeous, the methodical pace of events having a ticking clock effect on the larger story, the line between tragedy and jubilation perilously thin, especially as the days leading to Eliza’s graduation tick by one by one.

I can’t say I was as instantly floored by Mungiu’s latest the same way I was by 4 Months, 3 Weeks and 2 Days, to my mind one of the great motion pictures of the 21st century, but that doesn’t make Graduation any less marvelous. A profound drama that transcends cultural barriers in ways that are recognizable and poignant, the film’s power is lasting, pure and decidedly genuine. It casts a spell that is impossible to break, the shattering impact of what ultimately transpires a universal call to action that’s brutally clear no matter what language is being spoken. 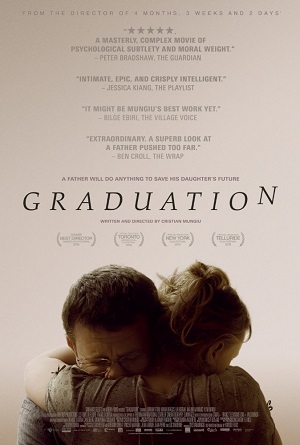