Dr. Ryan Stone (Sandra Bullock) is on her first shuttle mission. Veteran astronaut Matt Kowalski (George Clooney) is on his last. They’ve been tasked with fixing the Hubble Telescope adding a new component invented by Dr. Stone, installing upgrades that will give the orbiting satellite a longer life than it was originally thought to have.

There has been an accident. Debris from a recently destroyed satellite has started a chain reaction throughout the atmosphere, pieces of additional space garbage orbiting around the Earth like lethal mini-bullets. Dr. Stone has been cut off from Kowalski, drifting perilously out into the deep, dark void with almost no chance of survival.

Things change rapidly throughout director and co-writer Alfonso Cuarón’s (Children of Men, Y Tu Mamá También) existential survivalist outer space thriller Gravity, but in the end as far as plot goes that’s absolutely it. Dr. Ryan Stone is trapped, running out of oxygen, running out of options and quickly running out of time, forced to use her wits, smarts and will to find a way back to the surface of the planet when chances of doing so border on nil.

It’s thrilling stuff, Cuarón ratcheting up tension with inventive simplicity unleashing sequence after sequence of beauteous suspense and terror that, even with the off-world interstellar setting, is immediately relatable on an intimately visceral level. The idea of being lost in a void alone and with almost no hope of coming out alive is one virtually everyone, everywhere has probably felt at one point or another, the director playing upon those fears masterfully the finished movie a 90-minute marvel that held me spellbound for every solitary second.

There have been few celluloid achievements close to as amazing as what is brought to the screen by Cuarón in Gravity. The use of 3-D, the level of depth found buried within each of Emmanuel Lubezki’s (The Tree of Life) stirring, hypnotic images, the way Cuarón’s and Mark Sanger’s editing seamlessly blends one moment into the next, the photorealistic layering of the impressively tactile visual effects, it’s all astonishing. As a cinematic exercise there’s nothing in 2013 to compare it to (save J.C. Chandor’s narratively similar but far more earthbound All Is Lost, but those connection aren’t as extensive or as broad as one might immediately surmise), and as such coming out of a theatre unimpressed is close to an impossibility.

I could nitpick, of course. Cuarón and his brother Jonás have put together a script that doesn’t quite trust the simplistically genius central hook as much as it should, making sure less mature audiences stay involved adding extraneous bits of dialogue and inconsequential dramatic beats that are hardly necessary. They handhold Dr. Stone a bit more than needed, and I’m not entirely certain a couple plot points concerning past tragedies during her days on Earth move the emotional coin one way or the other.

All the same these small facets don’t feel like missteps so much as they are slightly inconsequential plot hiccups taking focus away from the stirring central quagmire. But they do so for only the briefest of moments, Cuarón and company understanding that keeping the focus directly upon our heroine, putting the viewer into the center of Dr. Stone’s shoes, is the best way to make this calamity hit home in ways it never could have hoped to otherwise. The best sequences, of which there are many, are seen entirely through her eyes, and at times I caught myself holding my breath in abject stunned silence as she attempts to extricate herself from this ordeal.

I don’t know how Bullock isn’t one of the five women nominated for a Best Actress Academy Award for her performance. She’s in virtually frame of the motion picture, asked to anchor the drama and become the audience’s lone anchor for the majority of the running time. Much of what she does is delivered without dialogue, without the help of a costar (as good as Clooney is, and he’s terrific, he’s not around nearly as much as you’d initially think), the sheer marathon of emotional nuances she is forced to traverse feel familiar and intimate yet also natural and honest. Bullock is terrific, and while I can make a strong case other actresses this year have delivered better performances in 2013 this is still an impressive feat I doubt Oscar can ignore.

Gravity is as big a wow as anything I’m likely to see throughout the remainder of this year. It is doubtful, from a cinematic esthetic at any rate, that there will be anything else released in 2013 that I can even compare it to. It can be said Cuarón has changed the game, especially as it comes to photorealistic 3-D, in ways James Cameron (Avatar) and Martin Scorsese (Hugo) only could have dreamt of achieving. While as a narratively driven story certain aspects do come up a little bit short as an exercise in pure filmmaking acumen and achievement what this visionary director has come up with is, if you’ll excuse the pun, simply out of this world. 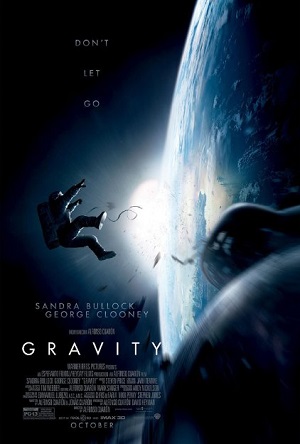