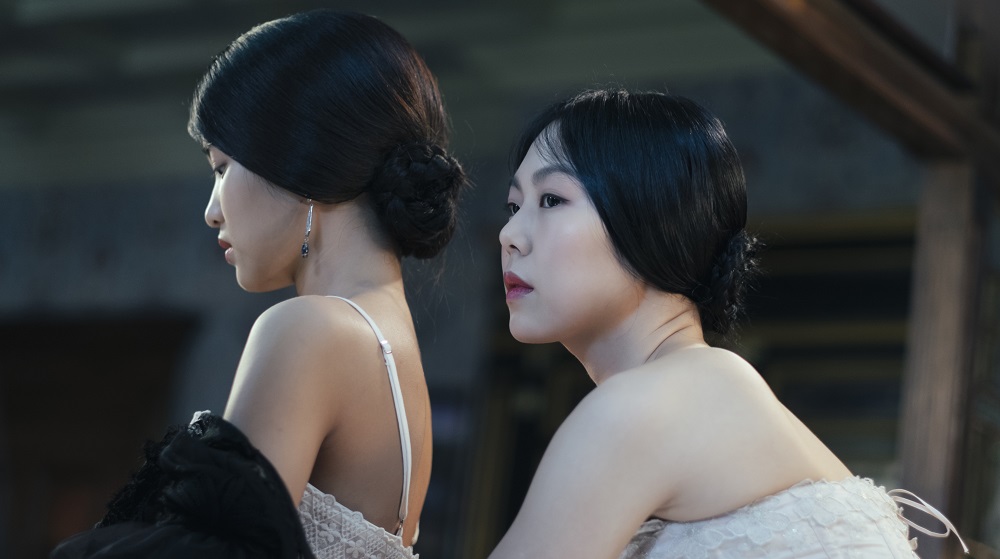 Nothing is ever what it seems to be in celebrated director Park Chan-wook’s latest mind-bending opus The Handmaiden, the man behind cult favorites like Oldboy, Stoker, Thirst and Lady Vengeance spinning things on their ear once again with his freewheeling adaptation of Sarah Waters’ 2002 novel Fingersmith. Told in three parts and from just as many points of view, it is an audacious, rapturously romantic thriller filled with visual delights, unexpected comedic flourishes and readily anticipated jolts of ugly violence. While not entirely successful, the film is certainly unique, delivering a sexually explorative jolt that is as imaginative as it is intoxicating. 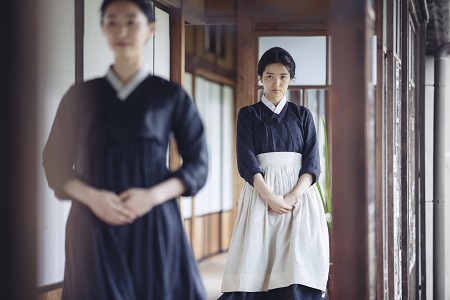 During the Japanese occupation of Korea, beautiful young Sook-Hee (Kim Tae-ri) finds herself employed as maidservant to the aristocratic Lady Hideko (Kim Min-hee). But it’s all a ruse, the young woman not who she appears to be. She’s actually streetwise thief working in concert with a suave conman known as the Count Fujiwara (Ha Jung-woo), the two having a secret plan for him to seduce and marry the lonely Hideko and thus setting themselves up for life after they abscond away with her fortune.

That’s enough plot for a single story, but for Chan-wook, that’s devilish bit of conspiratorial nastiness is only the tip of the iceberg. For a film running almost two-and-a-half hours in length, there is a brisk urgency to all the twisted machinations that follow this introduction, none of the characters behaving quite as I expected them to as the journey to the climactic turn of events vigorously kicks into gear. Romantic entanglements spring up in the most unlikely of places, and it’s never entirely clear who is seducing who and which members of the central trio are in on the actual con. It’s David Mamet by way of Bernardo Bertolucci with a dash of Claude Chabrol and a heavy dose of Akira Kurosawa, Chan-wook the devilish mastermind pulling the strings with the gleeful relish of a master magician getting ready to unleash his greatest illusion upon a clueless, if wide-eyed and rapturous, audience.

Meticulously designed to the last detail, elements of the supernatural weave in and out as differing accounts of the events taking place are recounted one after the other, each variation allowing new insights into the headspaces of the main characters as well as a mysterious aunt (Moon So-ri) who hung herself from a cherry tree and an ethereal housekeeper, Mrs. Sasaki (Kim Hae-sook), who sees more going on inside the mansion than she freely lets on. The differing visual esthetics of cultures in continual oppositional chaos is evident every step of the way, Chung Chung-hoon’s (Me and Earl and the Dying Girl) opulent cinematography an intimately visceral exploration of structure and style that’s practically as substantive as the cryptically byzantine, emotionally-driven plot itself proves to be. 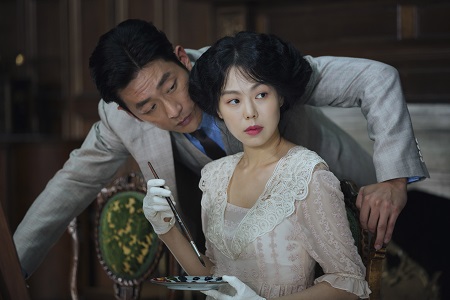 Much like pretty much all of Chan-wook’s films, it can go a little too crazy, the operatic flourishes coming perilously close to overwhelming things to an almost critical degree. The last third drowns in opulent bedlam, things getting so outlandish that continuing to believe in what it is the characters are doing as well as their reasons for doing so sometimes far more difficult than by all rights it should be. Yet, unlike his previous works that I have seen, this one finds a way to maintain cohesion, Chan-wook’s focus upon Sook-Hee and Lady Hideko so razor sharp, and Tae-ri and Min-hee’s performances so superb, the emotional histrionics that come to pass end up feeling oddly authentic in ways that are compellingly intimate.

I’m not going to say The Handmaiden is Chan-wook’s masterpiece. It’s as overwrought and as self-indulgent as anything the auteur has ever made, and not all of its numerous tangents fit together as nicely as I can only imagine he intends them to. But the film is still a glorious achievement, one filled with a number of unparalleled delights that only get richer and more meaningful the longer I think about them. Truth becomes fiction, fiction becomes truth, the seductive grey areas in-between an orgy of carnivorous beguilements that lead both to Heaven and to Hell in equal measure, Chan-wook delivering a marvel of storytelling sleight of hand worthy of euphoric admiration. 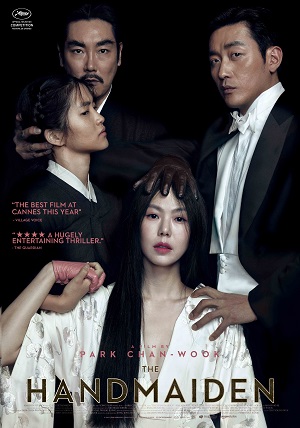