The good news is that The Hangover Part III is better than The Hangover Part II. The bad news is that this fact doesn’t make the movie itself any less terrible. While choosing to tell a story not revolving around a Bachelor Party gone wrong, while blessedly not recycling the jokes from the previous installments, nonetheless this final part of the highly successful series (according to box office receipts, not really anything else) is borderline terrible. Too serious to a fault, more an action movie than a comedy, the whole thing goes through the motions with a tired precision that grows increasingly bludgeoning as things progress, everything building to a forgettable conclusion that makes one wonder what they found so entertaining about the 2009 original in the first place.

This time around events revolve around the Wolfpack’s desire to get psychological help for perpetual man-child Alan (Zach Galifianakis). But after a somewhat successful intervention, friends Phil (Bradley Cooper), Stu (Ed Helms) and Doug (Justin Bartha) find their minivan under mysterious attack while they are on their way to a sanitarium, the quartet hogtied, blindfolded and taken to a mysterious location deep in the heart of the deserted nowhere.

It is here they meet Marshall (John Goodman), a beast of a man whom all the bad things in their lives can in some strange way be traced back to. He’s the one who controlled Black Doug (Mike Epps), the guy who initially sold Alan the drugs that led to their night of chaos in Vegas so long ago. He’s also been out to get his hands on Leslie Chow (Ken Jeong) for a long, long time, which is one of the reasons the boys had so much trouble in Thailand during their less matrimonial outing. Chow stole $21-million in gold from Marshall, and now that he’s escaped from that Thai prison and fled back to North America, the crime lord figures the Wolfpack are just the ones to find him. Taking Doug as an insurance policy, he has a pretty strong feeling the guys will feel suitably motivated to do just that, knowing Alan, Phil and Stu will do whatever it takes in order to see their friend returned to them alive.

What follows is a road trip taking the group from wilds of Mexico to the debauched place where it all begin, the chaotic neon lit streets of Las Vegas, the three friends running around in circles hoping to capture Chow. Thing is director and co-writer Todd Phillips, working alongside writer Craig Mazin once again, deliver all of this chaos and calamity without an ounce of nuance or subtlety, banging the viewer over the head with a gigantic sledgehammer every step of the way. It’s annoying, poorly plotted and comes perilously close to being insulting, and that’s not the worst part.

The worst part is that this latest sequel just isn’t funny. Uncomfortable? Sure, but considering Phillips has always been a fan of showcasing sequences of comedy that highlight the unseemly underbelly of a person’s most debased thoughts and desires this shouldn’t be a surprise. But, even when he and his film are at their absolute worst there still has always managed to be at least a couple laughs to be had. Here, that just isn’t the case, and while the shock factor remains high anything even slightly analogous to a chuckle or a giggle is impossible to find. 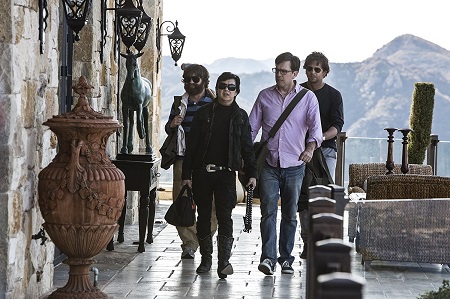 Revolving everything around Chow was the first mistake, his character an afterthought in the first Hangover and an annoyance in the second, so focusing on him now that we’ve reached the trilogy’s climax didn’t sit particularly well with me. The fact everything plays out much of the time like some ham-fisted Ocean’s Eleven meets Mission: Impossible hybrid probably isn’t such a great thing, either, and while I do appreciate the attempt to differentiate this final chapter as much as possible from the previous two it’s still readily apparent this tract simply does not work.

Unlike the last one I didn’t hate The Hangover Part III, and while a couple of gags potentially cross the line it’s a blurry enough one I can’t admit to being offended or horrified in any way that matters. But I was bored, start to finish, and other than a brief bit at the beginning and a crassly fitting spurt of absurdity during the credits there was little that managed to tickle my funny bone. The Wolfpack have lost their bark, been declawed and certainly no longer have anything close to resembling a bite, and I for one am thankful I won’t have to be running through the cinematic forest with them again anytime soon. 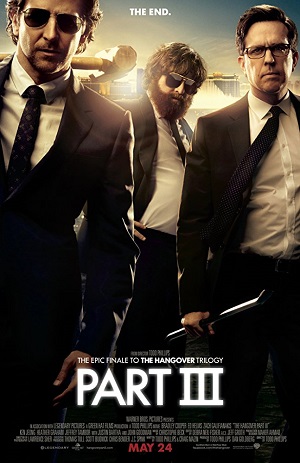