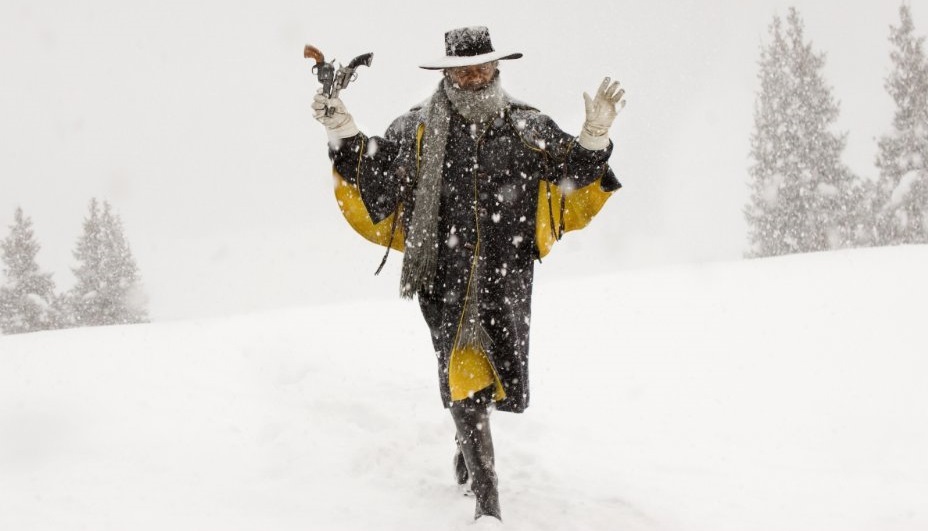 “One of them fellas is not what he says he is…” 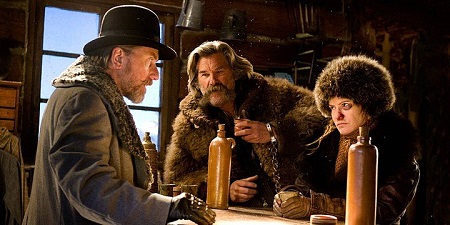 “John ‘The Hangman’ Ruth (Kurt Russell) is taking the stagecoach to Red Rock, fugitive Daisy Domergue (Jennifer Jason Leigh) shackled next to him, the fearsome bounty hunter shepherding the murderess to town for a date with a rope swinging plaintively from a gallows. On the mountain road to Minnie’s Haberdashery, with a hellish blizzard bearing down on them, the coach encounters a pair of stranded travelers. One is former Union war hero turned bounty hunter Major Marquis Warren (Samuel L. Jackson), the other a one-time Southern renegade, Chris Mannix (Walton Goggins), claiming to be the new Sheriff of Red Rock.

Yet in a movie overflowing in glorious elements, there is a distasteful aura I found impossible to get beyond. While I’m sure Tarantino is aiming to make some rather profound statements in regards to gender norms and racial disparities in the modern world, and even though Leigh throws her into things with wild-eyed ferocious glee, the misogynistic temperament permeating things drove me crazy. Daisy gets slapped around, punched, strangled, has teeth knocked out and is called all sorts of names, the majority rhyming with ‘witch’ and ‘chore.’ None of which would be too awful had her backstory even been slightly more fleshed out or realized, or if she could have exacted some sort of physical retribution against those manhandling her. Instead, she’s really nothing more than a device, a way for the remainder of the characters to work out their personal issues or come senselessly flying to her defense.

Then there is Goggins. The former Justified scene-stealer is unbelievably great as Mannix. By all accounts playing the scenario’s most challenging character, he’s asked to go from being a cartoonish, absurdly racist buffoon, to mixed-up bumpkin in way out of his league, to level-headed lawman ready to do whatever it takes to see justice accomplished. Goggins went from provoking y my disgust to achieving my sympathies, his complex emotional evolution revealing an innate humanity that’s something close to incredible. 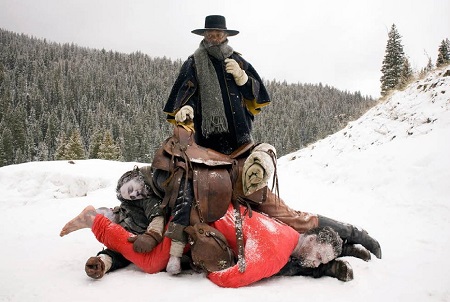 But what’s the point? That’s what I keep scratching my head over. Tarantino is riffing in one of his favorite genres, and it’s clear he’s having a great time. But it’s also just as obvious he’s got plenty on his mind and tons he wants to say. Problem is, little of it is clear. Worse, most of it gets drowned in so much guts and gore, not to mention irredeemably abuse and sexism, listening to it is close to impossible. The Hateful Eight has lots to love, but just as much to abhor, making it an elegant enigma that’s as frustrating as it is impressive.”

I’ve watched The Hateful Eight three times, and I remain as equally impressed with Quentin Tarantino’s latest as I am appalled by it. The movie is all over the map in many ways, and while the Agatha Christie meets Sergio Leone dynamics are oftentimes impressive, the sudden shift in point-of-view after the mid-point break I still find annoyingly underwhelming. But there is a lot of the film that is eye-popping and impressive, not the least of which are the performances of the entire cast, while the rich, lush cinematography, handsomely shot by the great, and Oscar-nominated, Robert Richardson continues to blow my mind, even on Blu-ray. Worth a look, for sure. I’m just not sure people are going to find it as long-lasting and as memorable as many other of Tarantino’s other cinematic achievements.

This Blu-ray features an English DTS-HD Master Audio 5.1 track along with a Spanish Dolby Digital 5.1 option and includes English SDH and Spanish subtitles.

Beyond the Eight: A Behind the Scenes Look (4:58) – A fairly lame, annoyingly standard EPK-style extra that adds shockingly little of substance.

A Digital HD Copy of the film along with a DVD version are included with this release.

I don’t know. There’s lot to love about The Hateful Eight. The acting is stellar, it looks terrific, and Ennio Morricone’s Oscar-winning score certainly sets the proper tone throughout. But Quentin Tarantino’s latest is sprawling, overwrought and more than a little full of itself at times, it’s second half turn not going to sit well with a number of viewers. Be that as it may, this Starz/Anchor Bay Blu-ray presentation, even with subpar extras, is exemplary, the technical specs alone enough for me to suggest fans should snatch this disc up sight unseen. 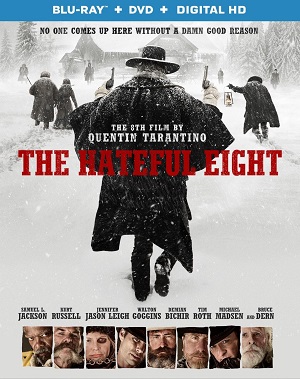