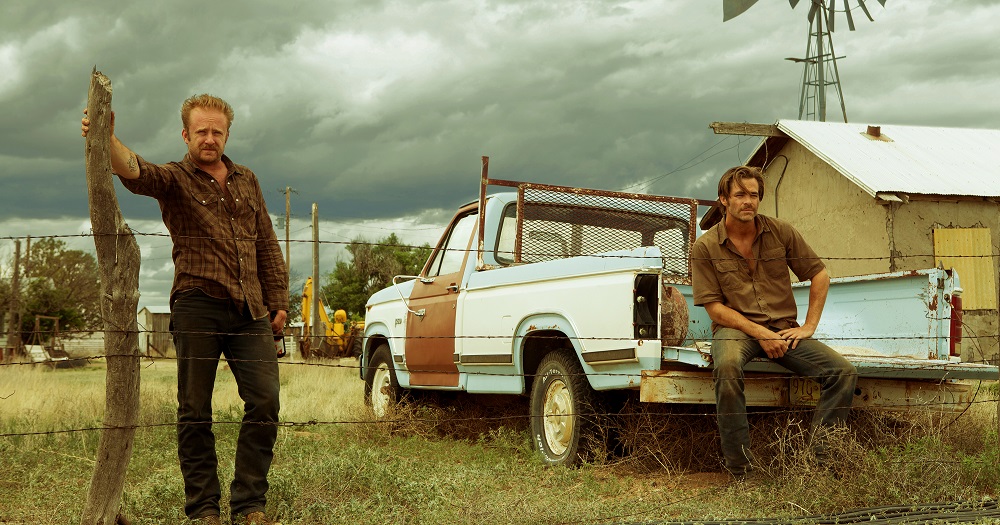 After the death of their mother, Toby Howard (Chris Pine) enlists the help of his ex-con older brother Tanner (Ben Foster) to help him save their family’s farm so he can gift it to his ex-wife and the children, the fact a sizeable oil field has been discovered on the property certain to guarantee their futures in ways nothing else would have. Problem is, the bank holding the mortgage on the property had done a devious job on their ailing parent, and if the loan isn’t paid off in the coming weeks they get to seize the property, as well as the liquid gold hidden underneath the dirt, all for themselves. 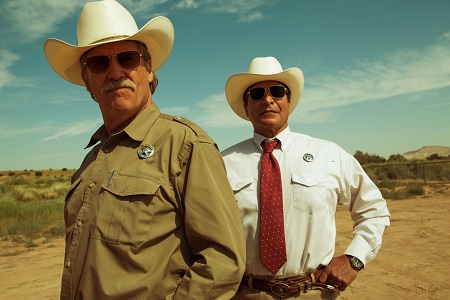 Texas Ranger Marcus Hamilton (Jeff Bridges) is a week away from retirement, a fact his longtime partner and friend Alberto Parker (Gil Birmingham) enjoys pointing out. But the two have one last manhunt to participate in as a team, a pair of robbers holding up small, rural branches of one of Texas’ larger banks, going out of their way to nab smaller sums, almost as if they are intent on raising a predetermined amount and not just grabbing cash willy-nilly. Together, they will come up with a plan and figure out where these men will strike next, Marcus doggedly focused to go out with one last arrest before being forced to turn in his badge and go off into that sweet goodnight a civilian.

Hell or High Water is a modern Western noir about a pair of sibling Robin Hoods who are determined to stick it to the bank that went out of its way to make it impossible for their mother to get out from under her mounting bills in order to snatch her property right out from underneath her. They are matched by a team of a smart, if decidedly laidback, law enforcement officers who figure what’s going on with relative ease, even if the identities of who it is they are chasing remain frustratingly hidden. It is a movie where two competing forces will run on parallel tracks until continuing to do so becomes a literal impossibility, the moment where they crash one into the other one that will be smothered in violence whether cop or robber wishes it to be or not.

Director David Mackenzie, the man behind movies as diverse as Young Adam, Perfect Sense, Tonight You’re Mine and Starred Up, and writer Taylor Sheridan, who burst onto the scene last year with his dynamic, pulse-pounding script for Sicario, have delivered on a massive scale here. Not only is Hell or High Water just a great, character-driven thriller that busts through genre conventions, forcing the viewer to take notice of what is going on and why in the process, it also happens to be one of 2016’s best motion pictures. It is a masterful effort that grows in power and depth as it moves along, building to a shattering, hauntingly destructive conclusion that had me sitting on the edge of my seat breathlessly excited to discover what was going to happen next.

I honestly can’t come up with a single thing to nitpick. As far as I’m concerned, Mackenzie and Sheridan’s film is pretty much flawless, delivering on just about every level. The controlled nature of the storytelling builds like a volcano on the verge of erupting, that anticipation of the it doing so almost more unbearable than the chaos and carnage left in its explosive wake. The two stories mirror one another, each playing itself out with sublime simplicity. This allows the emotions percolating underneath the surface to take center stage with startling efficiency, and in the process also helps the relationships between each pair of men feel all the more complex and fully developed.

The performances are extraordinary, Bridges adding another feather to his already legendary cap with his resolute, roguishly grizzled turn as the weary, if still resolutely clever, Hamilton. He’s matched every step of the way by Birmingham, the veteran character actor forced to play straight man to his costar’s eccentricities and borderline offensive wisecracks, finding a level of humanistic resolve lurking inside Parker that’s sublime. For Pine, this could be his finest hour, the understated minimalism he brings to the younger Howard brother both unexpected and incredible.

Then there is Foster. What is there to say at this point? After 3:10 to Yuma, The Messenger, 30 Days of Night, Lone Survivor, Alpha Dog and Ain’t Them Bodies Saints, it’s safe to say this is one actor who knows how to make an impression. He’s been deserving of accolades and end-of-year awards recognition many times over, the fact it has stubbornly refused to come his way as perplexing as it is unfortunate. Once again, he is masterful, his performance as Tanner a hypnotically multifaceted line dance that moves to its own interior rhythms right from the start. Foster is extraordinary, and it is highly doubtful I’ll see that many superior supporting turns at any point throughout the remainder of the year. 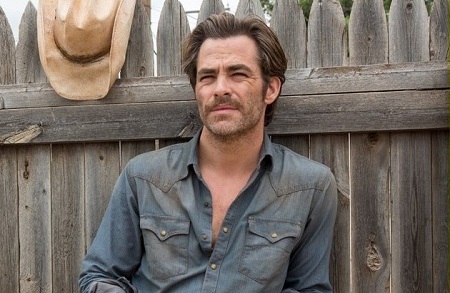 The technical side of things is equally strong, Mackenzie allowing cinematographer Giles Nuttgens (What Maisie Knew) and editor Jake Roberts (Brooklyn) the freedom to craft images and build scenes that help fuel the emotions coursing through the picture without ever overshadowing them. Equally important is the dynamic, razor-sharp score by frequent collaborators Nick Cave (Lawless) and Warren Ellis (Mustang), their compositions an important element of the ambiance, augmenting tension in ways that are almost indescribable.

It all culminates in a moments of revelation and understanding that spin the proceedings into unforeseen directions, and much like Joel and Ethan Coen’s No Country for Old Men or Robert Altman’s McCabe & Mrs. Miller it quickly becomes apparent the story Mackenzie and Sheridan are telling isn’t all it initially appeared to be on the surface. Hell or High Water has a lot on its mind, but the most important one is a desire to entertain and that it does, not just well, but beautifully, cementing the film as an instant stunner worthy of multiple viewings. 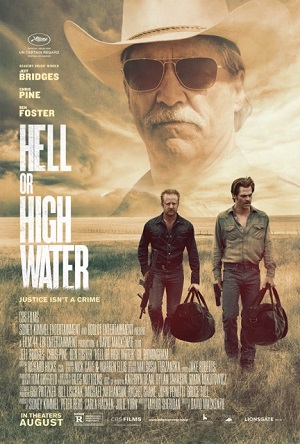