Slight Bodyguard a Forgettable Showcase for Jackson and Reynolds

After her transportation of hitman Darius Kincaid (Samuel L. Jackson) to the International Criminal Court at the Hague is blown to pieces thanks to someone revealing her route to a well-armed team of mercenaries, Interpol Agent Amelia Roussel (Elodie Yung) learns the hard way she can’t trust anyone in law enforcement. With few viable options, she contacts former boyfriend Michael Bryce (Ryan Reynolds) to lend her some assistance. He’s a professional bodyguard whom she had a falling out with two years prior after one of his high-profile gigs went tragically wrong and he blamed her for its failure. But be that as it may, and as down on his luck as Bryce might appear, Roussel knows there’s actually no one better than her ex to do this job, and if anyone is going to transport Kincaid to the Hague alive and in one piece, it’s going to be him.

Obviously Kincaid and Bryce know one another, and to say they’re not exactly on friendly terms would be an additional understatement. They will bicker. They will banter. They will argue over who is better at their respective jobs while debating the morality of what it is each of them does for a living. Through it all they will bond, learn things about themselves they didn’t know and make sure they reach the Hague in order for Kincaid to testify against disgraced former Belarusian dictator Vladislav Dukhovich (Gary Oldman). It’s Midnight Run meets 48hrs. meets 16 Blocks meets 3:10 to Yuma, all of it with a foul-mouthed, bullet-riddled swagger that feels a lot like a second tier B-movie Dimension Films would have sent straight to VHS back in the early 1990s.

That’s director Patrick Hughes’ (The Expendables 3) The Hitman’s Bodyguard in a nutshell, a movie with the thinnest of concepts that’s propelled forward entirely thanks to the energetic and engaged personalities of the two above-the-title actors at the center of all the mayhem. One gets the feeling screenwriter Tom O’Connor (Fire with Fire) had loftier intentions, his scenario going out of its way to hint at a larger world where protection professionals and hired killers vie to outdo one another all while international enforcement agencies like Interpol and the like do what they can to monitor their actions, stepping in to administer justice only when they have to. But none of that really comes through in any concrete way, almost as if the powers that be had stripped anything close to complexity or ballsy go-for-broke thriller aesthetics out of this piece in order to play things predominately for laughs.

To that end, all involved can thank their lucky stars Jackson and Reynolds are up to the challenge. While neither is doing anything that far removed from their typical shtick, the two not exactly required to dig deep in order to access emotional regions aching to be explored, their mutual chemistry is apparent right from the start. Also, for as convoluted as O’Connor’s script might appear to be, it also feels as if Jackson and Reynolds are making up the majority of what it is they are doing and saying as they go along. It’s a freewheeling little adventure that’s so loose and limber there’s no actual weight to anything that happens, and at almost two hours in length the fact it ends up being as breezily easy to watch as it is ends up being an impressive achievement in and of itself.

But a full-blown movie this isn’t. It’s a crassly violent comic book, an insane bit of violence and bloodshed overflowing in crude one-liners, car chases, explosions and random jolts of gunfire. But as far as a structured story with three-dimensional characters are concerned? There’s sadly not a lot to grab hold to. It’s so easy to figure out who the mole is inside Interpol that Hughes just stops trying to make it a mystery after about 20 minutes, while the goons working for Dukhovich are pretty much video game baddies who pop up firing machine guns and exist solely to get killed in a variety of whacky ways by Kincaid and Bryce.

You look at the films this one so clearly wants to emulate, motion pictures like the aforementioned Midnight Run, and as thinly plotted as many of these pieces of pulp entertainment might have been, they were still grounded in realistic characters who had complex lives that felt distinctive and authentic. That isn’t the case here. When a game Salma Hayek shows up for a handful of random scenes, she’s doing so to have a bit of fun while also picking up a relatively easy paycheck. When someone like Joaquim de Almeida makes an appearance as an Interpol bigwig, it’s not exactly shocking the part he’s about to play in the proceedings. Oldman struts around delivering a variation on his Air Force One performance but in a way that’s hardly as menacing as his baddie was in that Harrison Ford box office smash, making Dukhovich a facile, stereotypically banal villain hardly worth caring about. 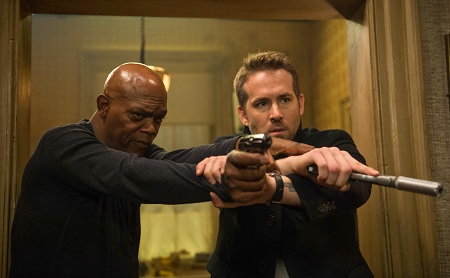 Even so, Hughes stages a couple of nice action sequences, especially one motorcycle-car-boat chase that’s fairly spectacular. There’s also some great fight scenes, and while they don’t rise to the same level as the ones in recent efforts like The Raid, John Wick or Atomic Blonde, it’s readily apparent the director has cribbed a little from what burgeoning genre maestros like Gareth Huw Evans, Chad Stahelski and David Leitch are offering up for an audience’s consumption. I was also tickled in regards to how one signature set piece began by taking place almost entirely in the background, Reynolds’s tired, upset and moderately annoyed character contemplating whether or not to get involved in the pandemonium while sipping vodka at an outdoor café.

I just wish The Hitman’s Bodyguard cared to make more of itself than it actually does. As easy to watch as it might be, as good as Jackson and Reynolds are together, this minor little action riff is shockingly easy to forget, practically nothing of any substance sticking with me all that long after I left the theatre. What could have been an interesting foray into a new world of killers, bodyguards and international enforcement agents instead proves to be a mindless piece of fluff and not much else, and for a story about lethal marksmen who never miss their shot this film ends up being well wide of the target the majority of the time. 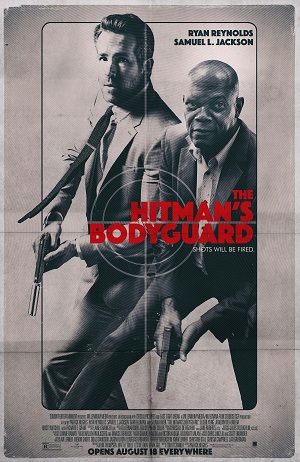