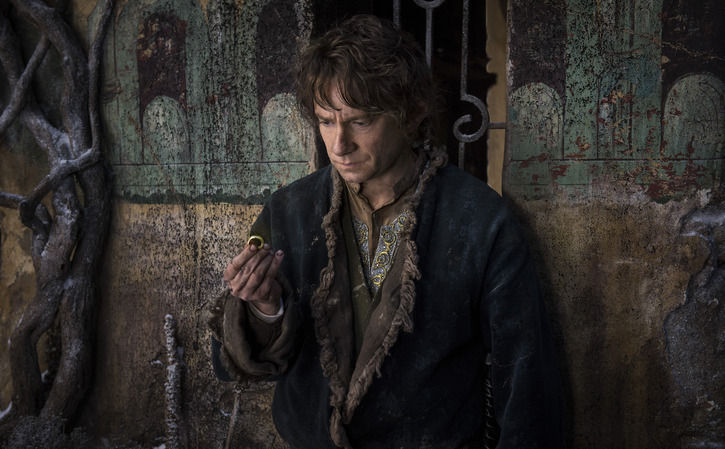 Been There, Can’t Go Back Again

The dwarves have reclaimed their home and Thorin Oakenshield (Richard Armitage) is now truly King Under the Mountain. But the Arkenstone has not been recovered, its absence infecting the whole company with doubt and worry. Additionally, Thorin finds himself under the spell of what can only be labeled ‘Dragon Sickness,’ hobbit and supposed professional burglar Bilbo Baggins (Martin Freeman) the only one who seemingly can see just how insane he is becoming.

The citizens of Laketown are in trouble. Bard the Bowman (Luke Evans) is now looked at as their leader whether he likes it or not. With few options, he makes the decision to take everyone to the base of the Lonely Mountain and urge Thorin to make good on his promises. His main worry is his family and their well-being, but the dragon slayer knows all the survivors from Laketown will likely perish without assistance from the dwarves, and if need be he’s going to get what was pledged even if he has to do so by the use of force.

Thranduil (Lee Pace) has also journeyed to the Lonely Mountain coming with an army of his best warriors. He has heard of Thorin’s reclaiming of his title over the dragon Smaug (Benedict Cumberbatch) and wants to make sure jewels long lost to his people are returned no matter what the cost. This Elf leader, too, will go to war to regain what he feels is his, and he doesn’t care how many lives it will cost to do so.

That’s the tip of the iceberg as far as Bilbo, Thorin and the rest of their dwarf companions are concerned, orc and goblins on the march from the depths of damnation heading towards the Lonely Mountain to begin an assault on all of Middle-Earth. Gandalf (Ian McKellan) shows back up to add insight and assistance, as do Legolas (Orlando Bloom) and Tauriel (Evangeline Lilly), while a certain fiery figure searching for a singular golden ring of power begins his resurrection much to the horror of Elf Queen Galadriel (Cate Blanchett), Rivendell ruler Elrond (Hugo Weaving) and the all-powerful White Wizard Saruman (Christopher Lee). 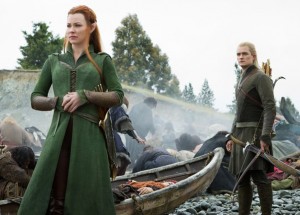 Yet, what is most amazing about Peter Jackson’s The Hobbit: The Battle of the Five Armies, the director’s final flirtation with the writings of celebrated author J.R.R. Tolkien, is just how inconsequential all of this nonsense feels. Armies of Men, Orcs, Dwarves, Goblins and Elves descend one upon the other yet all if it is oddly devoid of heart, absent emotion, and while every moment is beautifully composed and staged I can’t for the life of me come up with a good reason why it is I should care. It all just sort of is, just kind of of happens, and while the parties in play and the pieces they fit inside this massive puzzle do lead to the Lord of the Rings trilogy at this point I’m just too exhausted and bored with it all to feel anything close to excitement in regards to any of that.

I can’t say it helps that the opening prologue, brisk, full of vim, vinegar, fire and ferocity, is over almost before it begins. More, this sequence should have ended the last movie, not started this one, especially considering how quickly Jackson gets it over with, Bard’s battle with Smaug in some ways more of an afterthought than it is an integral part of this final chapter of the trilogy. In all actuality all it did was remind me just how annoyed I was by the cliffhanger dopiness of the last seconds of The Hobbit: The Desolation of Smaug, putting a bad taste in my mouth right at the start I was never fully able to wash out no matter how much Diet Coke I continually sipped.

But the biggest problem is that, as grand as everything looks, as spectacular as the effects might be and as nicely staged as the majority of the action sequences are, there’s just no heart to Bilbo’s final adventure, the characters inhabiting it too nondescript and one dimensional to resonate in ways that matter. Save a couple nice moments between the diminutive hero and Thorin, aside from a wonderful scene between Tauriel, Legolas and Thranduil near the end, there was little that moved me, less I felt was compelling, so much of what transpires just eye-popping spectacle for the sake of spectacle and sadly nothing more than that. 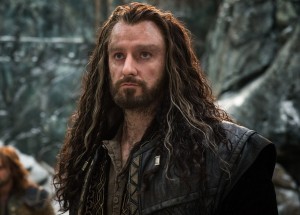 A shame, really, because it isn’t like Jackson can’t make a massive battlefield epic that still connects on a deeply personal level, both The Lord of the Rings: The Two Towers and The Lord of the Rings: The Return of the King proving that in spades. But whereas the appearance of the Riders of Rohan on the ridge during the latter puts a lump in one’s throat and produces a sudden urge to stand up and cheer, a similar sequence here concerning a troop of dwarves (led by a suitably cartoonish Billy Connolly) is nothing short of laughable, an inexcusably silly sequence of events that’s so unintentionally ridiculous it almost feels like a parody of one of the director’s Tolkien adventures and not in fact an actual part of one.

I like the way The Battle of the Five Armies ends, responded to Bilbo’s return to the Shire much more completely than I figured I would considering how little of anything else taking place in this trilogy capper charmed me. The way Jackson ties things into the start of The Lord of the Rings: The Fellowship of the Ring is rather beautiful, hinting at a more endearing, far more intimate endeavor that potentially might have been had the director edited himself down and focused on the core elements residing in Tolkien’s book.

Sadly, in this day of bigger just has to be better bloated and gargantuan ultimately carries the day, and a story that barely filled up just over 300 pages in print suddenly ends up being nearly nine hours in length when crafted for the screen. I was more than happy to journey with Jackson back to the world of Tolkien, was overjoyed to go there with him in 2012 when this endeavor began. Now that it’s over it’s obvious to me now that The Hobbit maybe would have been better off left alone (or made by someone else), getting back again as unhappy a culmination to an undertaking as any I’ve possibly ever had the displeasure to experience. 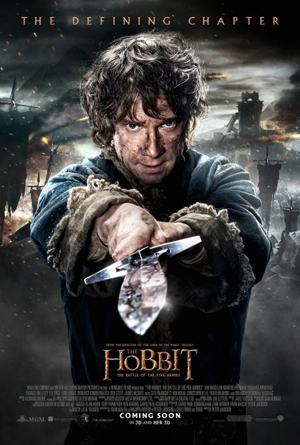