Remember how the original Star Trek movies had that even-odd curse? That mythology stating that all the even-numbered movies (Star Trek II: The Wrath of Kahn, Star Trek IV: The Voyage Home and Star Trek VI: The Undiscovered Country) were good while the odd ones were bad? It was a popular meme (even if it forgot about Star Trek III: The Search for Spock which was pretty darn decent), one that ended up achieving an air of legitimacy due to the sheer volume of people who kept repeating it over and over again throughout the 1980s and ‘90s.

I think we can start making the case that, as far as Ice Age is concerned, we have a similar scenario happening. I get that these are different franchises with dissimilar target audiences, but I still think the basic premise is relevant. While Ice Age and Ice Age: Dawn of the Dinosaurs are a fair bit of fun, the middle film Ice Age: The Meltdown is forgettable, and while all three were financially successful I know few who think highly of that second chapter.

It’s the odd ones that are good and the even that are bad, a theory I feel comfortable espousing considering just how boringly mediocre Ice Age: Continental Drift ends up proving to be. Sure the animation is amazing, but that’s par for the course for these films. There are also a handful of fun little moments, most of those unsurprisingly revolving around the acorn-chasing half-rat, half-squirrel Scrat. Even so this latest prehistoric kid-friendly entry in the franchise is a major drag. The story is tired, the characters aren’t as charming or as memorable as they used to be and the plot feels tossed together in a strangely unappealing way.

The scenario this time around finds mammoth Manny (voiced by Ray Romano), saber-toothed tiger Diego (Dennis Leary) and sloth Sid (John Leguizamo) literally out to sea when the Teutonic Plates shift and gigantic landmasses make their peaceful valley uninhabitable. In the middle of the ocean, the group is taken captive by pirate ape Captain Guff (Peter Dinklage) and his band of shipmates. With time running out the trio must find a way to escape from this buccaneer’s clutches, steal his ship and return back home, hopefully getting there before calamity befalls Ellie (Queen Latifah), Peaches (Keke Palmer) and the rest of their heard leaving them all good as extinct.

I guess this could have been fine, the filmmakers coming up with a solid family-friendly story that should please the series’ legions of pint-sized fans. But little of what transpires feels like a completed thought, the whole movie coming across more as a flurry of disconnected ideas more than it does anything substantive. A subplot involving Peaches, her attempts to break away from her father’s control and her friendship with prehistoric meerkat Louis (Josh Gad) goes nowhere, while another involving Diego and his feline swashbuckling opposite Shira (Jennifer Lopez) starts out fine only to quickly wear out its welcome.

There’s an out of left field musical number sung by Dinklage and his crew that brought a smile to my face, as did a bizarre Braveheart reenactment I don’t want to say much about in fear of spoiling just how insane it is. Even better, the sequences with Scratch still have a wicked, Chuck Jones-like charm that’s frequently amusing. But the movie doesn’t work, the whole thing a lumpy excuse to showcase some stunning animation and almost nothing else. Ice Age: Continental Drift isn’t very good, and if a fifth adventure ever ends up being made here’s hoping it follows in the footsteps of the other odd-numbered entries in the series and brings back the good-natured fun this fourth effort lacks. 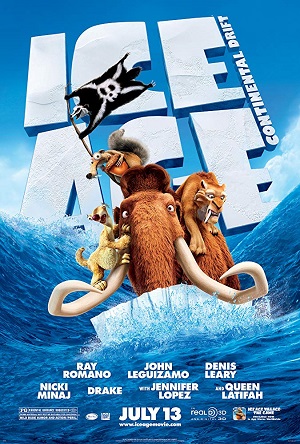