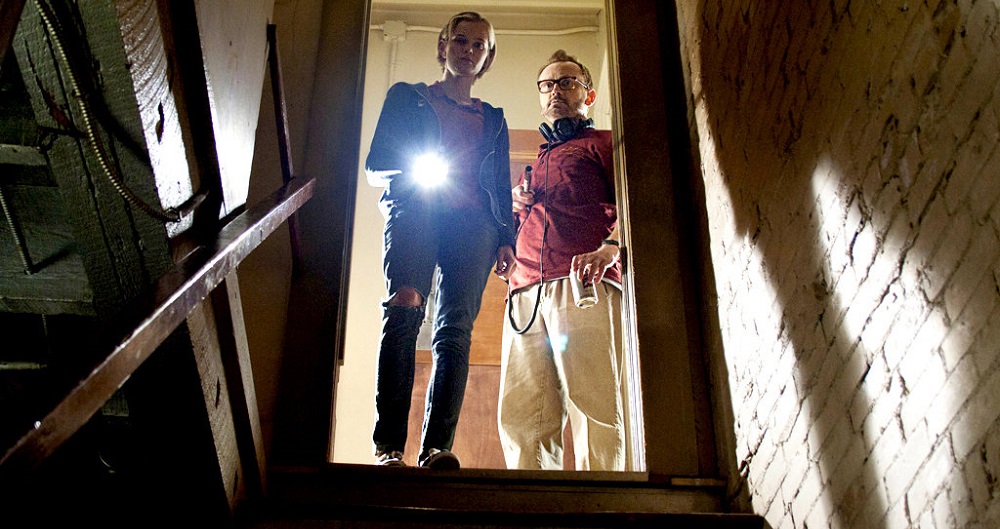 The Yankee Peddler of Torrington, Connecticut is closing its doors. Open since 1891, the owner just can’t keep things going anymore, so employees Claire (Sara Paxton) and Luke (Pat Healy) are in charge of overseeing the final weekend with only a handful of eccentric guests to keep them company. 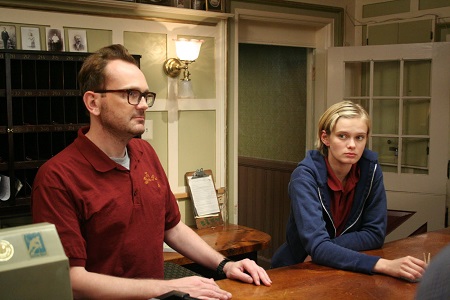 That’s perfectly fine as far as they’re concerned. The Yankee Peddler is haunted, guests and staff noticing strange paranormal events for going on a century. Claire and Luke, amateur ghost hunters, are going to prove these phenomena are indeed taking place, using the hotel’s final remaining hours to uncover the ethereal secrets the venue has been ominously hiding for untold generations.

Things don’t entirely go as planned in writer/director Ti West’s follow-up to his minor independent horror sensation The House of the Devil, the eerie if all-to-familiar The Innkeepers not exactly filling the haunted house rule book with any new entries. Things go bump in the night, lights flicker, pianos play by themselves, weird old men check in and insist on being given access to a room where history suggests a sad newlywed hung herself and a former child star (Kelly McGillis) presents herself as a practicing psychic. It’s the usual hokum, and anyone expecting otherwise better be prepared for disappointment.

For those willing to let the film’s modest charms work on them, however, West’s latest can be one heck of an enjoyable pulse-pounding ride. There are some great moments, especially during sequences when Claire finds herself alone inside the expansive New England hotel trying to record paranormal noises while at the same time doing her best to keep her fear in check. Like The House of the Devil the director shows a flair for ambience and mood, a delectable air of gothic malevolence hovering over the proceedings even during the sillier sequences where the two Yankee Peddler clerks banter back and forth.

Also like his previous effort West’s ability to pace his movie leaves something to be desired. Even at a brisk 100-minutes The Innkeepers noticeably drags. I get that the director wants to build suspense slowly, wants to evoke the greats like Robert Wise (The Haunting) or Stanley Kubrick (The Shining), but where they knew when to pull back and when to step on the accelerator West still seems unable to fully comprehend how to work the clutch. The early portions of the film are frustratingly herky-jerky, and if not for a moderately sensational last third I’m not altogether sure I’d be bothering to write a review for this one at all.

Yet that last third is superb, and even though the outcome is never in doubt (you’ll have it pegged within the first ten minutes) getting there is still a great deal of sweaty-brow fun. Paxton is energetically perky as the heroine, while Healy has the deadpan slacker thing down pat. McGillis, much like she did in Stake Land, steals the majority of the scenes she’s in no matter how cheesy her dialogue might be or how ridiculous the situations she’s involved with undeniably are, while veteran character actor George Riddle makes an indelible impression as the hotel’s somewhat suspicious final guest. 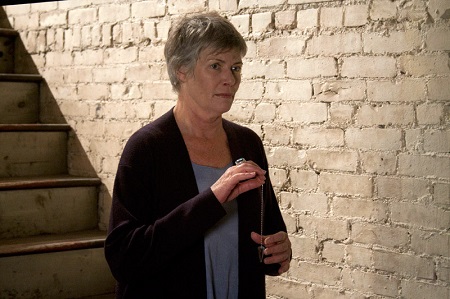 But the real star here is the Yankee Peddler, the New England landmark showing itself off to perfection. It becomes the movie’s most important, must innervating character, and the way cinematographer Eliot Rockett glides down its halls enraptured the most malevolent and sinister corners of my most intimate imaginations. Combined with Jeff Grace’s (Meek’s Cutoff) suitably minimalist score the effect the hotel had over me went way beyond creepy, and after watching the movie I don’t know if I want to call up the front desk for a reservation or never stay in similar type of establishment at any time ever again.

West has talent, both this and The House of the Devil prove that, I just don’t think he’s quite lived up to his potential as of yet. With The Innkeepers the independently-minded filmmaker keeps moving in the right direction, and I like that he uses restraint and nuance to bring his tales of horror and the bizarre to life. But the final motion picture, for all its insidious intent and moments of unhinged hair-raising glory, still feels a little sluggish, and in the end that particular bit of disappointing truth might be the scariest realization of them all. 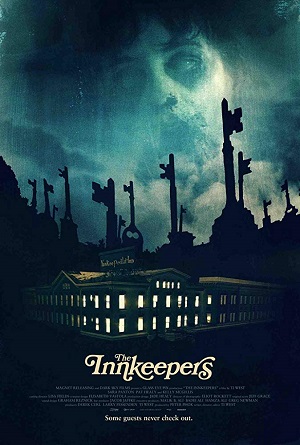