Professional contract killer Charlie Wolfe (Simon Pegg) is amused to find his latest assignment go a little south when a bunch of bumbling nincompoops attempt to do exactly what it is he’s been paid to accomplish, failing in about as gruesomely grand a fashion as humanly possible.

“Charlie Wolfe (Pegg) kills people for a living. Initially hired by Aussie bar and beachfront hotel owner Jack Taylor (Callan Mulvey) to see if his wife Alice (Alice Braga) is having affair, things quickly move in the direction of a contract killing once he discovers she’s sleeping with hunky mechanic Dylan Smith (Luke Hemsworth). But before he can do the deed himself, Charlie ends up witnessing the bumbling duo of Lucy Webb (Teresa Palmer) – Jack’s younger sister – and her dentist husband Nathan (Sullivan Stapleton) attempting to do his job for him, the pair bungling it every step of the way.

Nothing goes as planned, of course, everyone mucking up their respective plans to the point they no longer even cursorily resemble what was originally intended, Charlie observing with amused psychopathic indifference as blood is spilled, cars are blown to bits and bullets fired from pointblank range. Additional players also get themselves involved, including a murderously corrupt police officer (played with eccentric cravenness by veteran Bryan Brown), while a bag filled with $250,000 in ill-gotten gains changes hands multiple times. It’s all a bit of coldhearted comedic noir that gets more brutal and flippantly violent as it moves along, everything building to a properly blood-splattered conclusion that’s as sardonic as it is ruthless.

Sadly none of this makes the movie what it needs to be most, and that’s good, Kill Me Three Times a rather disappointing muddle that’s never as clever as I kept feeling like it thought it was or as bleakly hysterical as it needed to be in order for its more obvious shortcomings to no longer matter. Director Kriv Stenders (Red Dog) shows some flair, and his staging of some of the more hyperactive sequences of mayhem and chaos is certainly impressive. But James McFarland’s script is more cute than it is multifaceted and well-structured, the characters inhabiting this dreary, borderline lifeless slice of pulp pabulum not worth spending time with.

Which sucks for Pegg, because goodness gracious does he know what kind of film he’s in and runs madly with it in ways that are consistently invigorating. He’s apparently the only one who gets what Stenders and McFarland are trying to achieve, creating a character of such black-hearted despicableness he’s kind of a blast to be around. His flabbergasted glee as he realizes what Lucy and Nathan are attempting is infectious, as is his shock when the least expected person gets the drop on him (even if it’s only for a moment or two). Pegg hams it up marvelously, and as such he’s the lifeblood of the enterprise and without him I doubt it would be even passingly worthwhile.

The rest of the recognizable cast? Well, other than Brown, who appears to be having a blast, the rest are stranded with precious little to do or play, which is particularly egregious where it comes to both Braga and Palmer, both of which deserve far better treatment than what’s offered them here. By and large they all end up getting what’s coming to them, sure, but it’s rarely as shocking, surprising or, for that matter, funny as it needs to be. They’re going through motions that get increasingly obnoxious and annoying as events progress, all of it building towards a rushed, ham-handed conclusion that’s decidedly underwhelming.

One can’t help but wonder what might have happened had Pegg brought along his Hot Fuzz and The World’s End cohorts Edgar Wright and Nick Frost for this particular ride, as the tone and pitch black sense of humor seems right up the trio’s alley. But with Stenders more interested in the crazy visuals and McFarland’s script just mulling around desperately looking for a reason to exist, Kill Me Three Times is dead on arrival, and unfortunately it didn’t take 90 minutes of my life to figure that out.”

Nope. Still don’t like it. Pegg’s terrific, and Stenders does stage a couple of amusing grotesque sequences of bleak black comedy that did get me to giggle a tiny bit, but overall this film is just too flatly unappealing and boringly obvious in its machinations to be worth much in the way of a viewer’s time. A missed opportunity, to be certain, giving Kill Me Three Times a second chance to win me over wasn’t a particularly good idea  on my part, and I’ll just leave things there and go on with the rest of my day.

Audio Commentary with director Kriv Stenders and cinematographer Geoffrey Simpson – Of the two commentary tracks, this is the one I chose to listen to and it was a wise decision as the pair is in fine form digging into numerous aspects of the production. Very informative.

Audio Commentary with director Kriv Stenders and producers Larry Malkin, Tania Chambers and Share Stallings – Didn’t listen to it. Sorry. Just could bring myself to sit through the film one more time.

The Making of Kill Me Three Times (18:16) – Better than average EPK-style making-of piece with plenty of solid input from numerous members of the cast and crew.

Deleted Scene (4:53) – It’s a pretty good one, and, like a lot of the stuff contained within the film, is fairly amusing as its own distinctive little vignette. That said, had it been worked into the movie itself? The less said on that front the better.

Q&A (14:29) – Taped at the BFI London Film Festival; good not great, with Simon Pegg (not surprisingly) getting in the best lines. Most noticeably, and something that makes a lot of sense when you watch the film, writer James McFarland says absolutely nothing, nothing at all.

Behind the Scenes Photo Gallery

Kill Me Three Times wastes an outstanding cast and a decent enough premise, rambling around aimlessly desperately looking for a solid reason to exist. Magnolia’s Blu-ray release, however, is a strong one, and those who disagree with me and enjoyed the film would find it more than worthwhile to pick this one up. 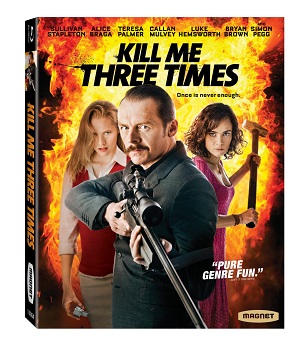