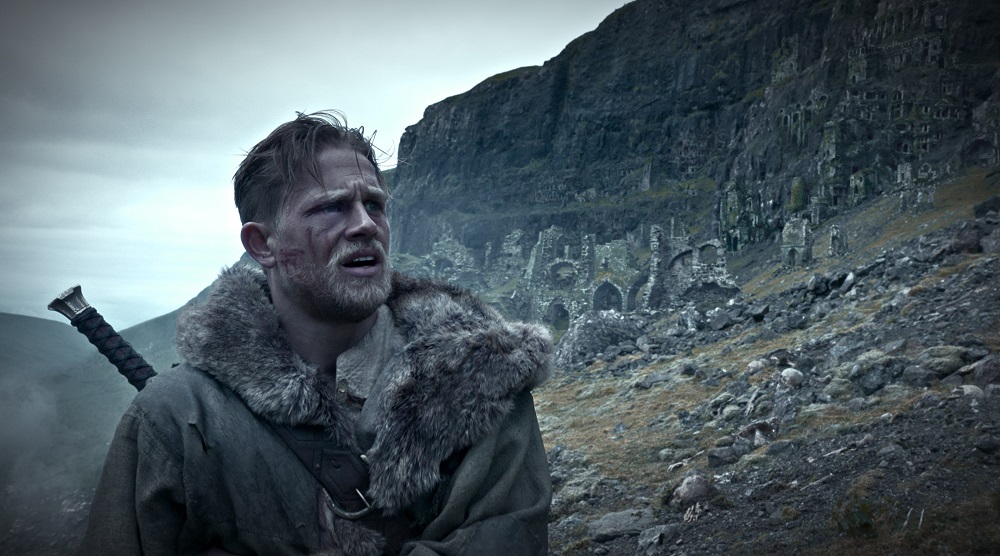 Ritchie’s King Arthur a Schizophrenic Reworking of a Legendary Tale

Where it comes to Guy Ritchie’s King Arthur: Legend of the Sword, I don’t know where to begin. Did I enjoy aspects of this crazed, schizophrenic reworking of the Arthurian legend? You bet, moments of action, daring-do and physical comedy leaping off the screen with raucous enthusiasm. Does the movie on the whole work? Heck no, the whole thing a muddled jumble of ideas, themes, tones and colorfully anarchic visuals that all seem to exist in about seven different films and not a single, cohesively focused one.

One thing I can say, this is not the story of King Arthur and his Knights of the Round Table most are familiar with. The literary iterations of Arthur, whether they be Geoffrey of Monmouth’s, Thomas Malory’s, T. H. White‘s or Marion Zimmer Bradley‘s, play almost no part whatsoever in this new variation, screenwriters Ritchie, Joby Harold (Awake) and Lionel Wigram (The Man from U.N.C.L.E.) ditching the romantic notions of the myth for something that strays far more into J.R.R. Tolkien territory than it does anywhere else. There is no Lancelot, no Guinevere, and other then being talked about in hushed, revered tones paying him all kinds of respect and admiration, there’s also no Merlin. One feels that, if this movie is a hit, all three are being kept in reserve for future adventures of the boy King who can wield the mystical sword Excalibur, those expecting to see any of them make an appearance here will be seriously disappointed.

Orphan street thug Arthur (Charlie Hunnam), raised in a brothel, does what he can to protect those dearest to him in the violent, seedy neighborhoods of Londinium. While he and his devoted gang do their best to stay off the local authority’s radar, turns out the conniving King Vortigern (Jude Law) has other plans. The magic sword Excalibur, a blade only the rightful heir to the British throne can wield, has risen from the depths of the sea embedded in a massive stone. All young men have been ordered to see if they can pull the weapon from its resting place, that person the son of the beloved former King Uther Pendragon (Eric Bana) and thus the rightful ruler destined to take the place of the wicked Vortigern and a warrior prophesized to bring peace to a Britain on the brink of war.

It’s basic stuff, and while the sword in the stone myth is present, that’s it as far as Arthurian legend is concerned. The story, for all its hyperbolic excess, is actually pretty simple, owing more to Greek mythology than it does to Celtic lore. It’s messy and all over the place, some elements working beautifully while others drown in melodramatic excess. The characters, other than Arthur and Vortigern, are barely fleshed out, and if you were to ask me what any of them did during the film other than scowl, curse, fight, bleed and die I’d be hard-pressed to remember what that was.

That’s not entirely true. About a third of the way through a mysterious Mage (Astrid Bergès-Frisbey) enters the picture, and she goes full-on Beastmaster on a number of occasions, getting snakes, birds, guard dogs and other various animals to do her bidding with slinky, seductive determination. She also gets to talk a lot about Merlin, the creation of Excalibur and the Lady of the Lake (whom she might actually be; I honestly could never figure that bit out), all the while also urging Arthur to stop looking away at the demons haunting him and use past tragedies as fuel to defeat Vortigern. The Mage is an intriguing character, and while she doesn’t exactly showcase much in the way of emotion (a fact not helped by actress Bergès-Frisbey’s uncertain English), there’s something haunting hiding behind the woman’s eyes that kept me fascinated.

Visually, even with the video game cut scene stylistics of much that transpires during the biggest action sequences, Ritchie has outdone himself, conjuring up images of astonishing virtuosity that are extraordinary. Veteran cinematographer John Mathieson (Gladiator, Logan) is in complete control, the intensity driving his compositions invigorating. Production designer Gemma Jackson (Finding Neverland, “Game of Thrones”) outdoes herself once again, and while I have no idea how historically accurate Annie Symons’ (Glorious 39) costumes are (I’m guessing not very), that doesn’t make them any less fantastic. Best of all is Daniel Pemberton’s (Steve Jobs) incredible score, his rousing, frenetically kinetic themes adding a jolt of electricity the film would never have survived without.

As positive as all of that might be, I still can’t decide if any of it is enough to make up for the crazed, idiotic lunacy of the various elements Ritchie does his best to try and combine into a single, straightforward narrative strand. Pulling on some of his past efforts, most notably Snatch, Sherlock Holmes and The Man from U.N.C.L.E. while at the same time trying to go in a direction that’s part comic book superhero madness and another The Lord of the Rings fantasy sincerity, it’s rare when any one sequence fits snugly alongside those next to it. The sheer lunacy becomes increasingly obnoxious, the final battle a full-on nonsensical assault on the senses that bends time backward and forward while in the same moment reminding one of a big boss battle from video games like “Diablo” or “The Legend of Zelda.” 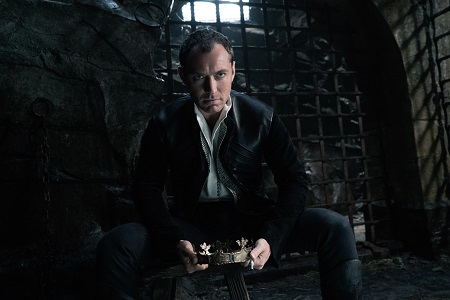 Look, I’m an Arthurian junky from way back. I’ve read The Once and Future King at least a half-dozen times. I think John Boorman’s Excalibur is one of the greatest films ever made. I find Disney’s The Sword in the Stone to be a timeless animated treasure I could sit down and watch fifty times in a row and never grow tired of. But that doesn’t mean I can’t pan an adaptation when I feel it has gone off the rails, the animated Quest for Camelot, Jerry Zucker’s First Knight and Antoine Fuqua’s King Arthur odious variations on the tale that in my view should be watched by no one and forgotten about entirely.

Ritchie’s attempt sits somewhere in the middle of these takes on the story, his movie bouncing between marvelous and dreadful for the entire length of its 126-minute running time. But while Hunnam might be a fine Arthur and Law a heinously abhorrent villain, the story’s inability to maintain narrative cohesion and the lack of suitably interesting secondary characters takes its toll. King Arthur: Legend of the Sword might go down swinging, but that means it does still go down, Excalibur’s magic sadly not near enough for Ritchie’s latest to win the day. 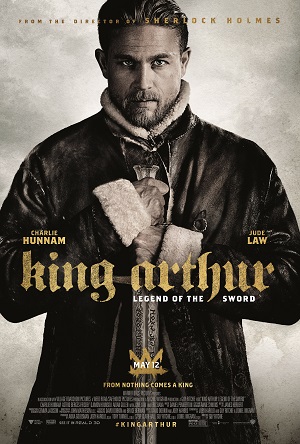