The Kings of Summer probably shouldn’t work. The central idea revolves around three teens, Joe Toy (Nick Robinson), Patrick Keenan (Gabriel Basso) and odd duck Biaggio (Moises Arias), who decide two build a house in the middle of the woods and live there without telling their parents. The first two aren’t exactly happy with what’s going on at home, Joe upset at his father Frank (Nick Offerman) while Patrick is so fed up with his own mom and dad (Megan Mullally, Marc Evan Jackson) it’s all he can do to remain in their presence without screaming.

Why shouldn’t it work? For one thing, after making the collective decision to strike out on their own without telling their parents, and even though the town is a small one and their faces get plastered all over the news as “missing,” no one seems remotely able to put the pieces together and find them. Second, the existential John Hughes meets Henry David Thoreau meets American Pie meets Wes Anderson nature of all this can get a little silly, trying to count all the influences that inspired writer Chris Galletta’s script and informed Jordan Vogt-Roberts’s direction akin to its own drinking game.

Be that as it may, The Kings of Summer is a certified joy that had me grinning ear-to-ear. Not only is the movie consistently amusing, filled with a seemingly never-ending series of laughs, some of which took me blissfully by surprise, the heart of the piece remains honest and true. Galletta doesn’t go for easy sentiment, and Vogt-Roberts happily avoids drippy melodrama whenever he can, allowing Joe and Patrick to evolve from selfish teenagers to conscientious and resilient young adults with subtle simplicity. Everything culminates in sublime fashion speaking to the best of who we wish we were and the strength of character it takes to admit our shortcomings, life lessons that hit home nicely even if they aren’t entirely original.

As selfish as he can be, I think the reasons this movie ended up working as well as it did for me was that I could relate to Joe, could understand his anger and angst. I felt like I knew where his pain was coming from, and while the things he’s running from are hardly innovative, the spark simmering within him causing him to take action (as misdirected as said action might be) was one I strangely felt kinship with. In another life and had things gone a bit differently I could easily see myself making similar decisions once upon a time, and while I doubt I’d ever have left the comfort of my home and attempt to build my own in the middle of the forest that doesn’t mean that seed of angst-ridden doubt wasn’t still there.

It can be a little puerile and unbelievable, and I did have to take a pretty big leap of faith in order to buy into the fact that this misbegotten trio could so successfully build something so massive without once being detected by the outside world at large. Additionally, a subplot involving Joe’s crush on best friend Kelly (Erin Moriarty) and his enflamed jealousy when she starts having feelings for Patrick are all too obvious, delivered with a heavier hand than any other dramatic element inside the feature is. Finally, as great as the adult actors are, especially Offerman, who is hysterical, their collective one-dimensionality grows tiresome, Galletta and Vogt-Roberts giving them less to work with then they all undeniably deserve.

But these flaws aren’t the killers they could have been, the filmmakers hitting just the right note as they inch things towards their conclusion. The air of melancholy is infectious, while the frequently hysterical jokes themselves echo with an aching emotional subtext that’s wonderful. While the insights swirling within Galletta’s script are obvious, and while the life lessons Joe learns aren’t exactly overflowing in imagination, everything still manages to maintain a vivacious potency I wholeheartedly responded. As stated, The Kings of Summer shouldn’t work, the fact that it does a pleasant summertime cinematic revelation I couldn’t have been more thankful for. 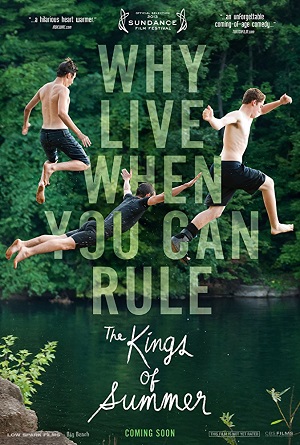