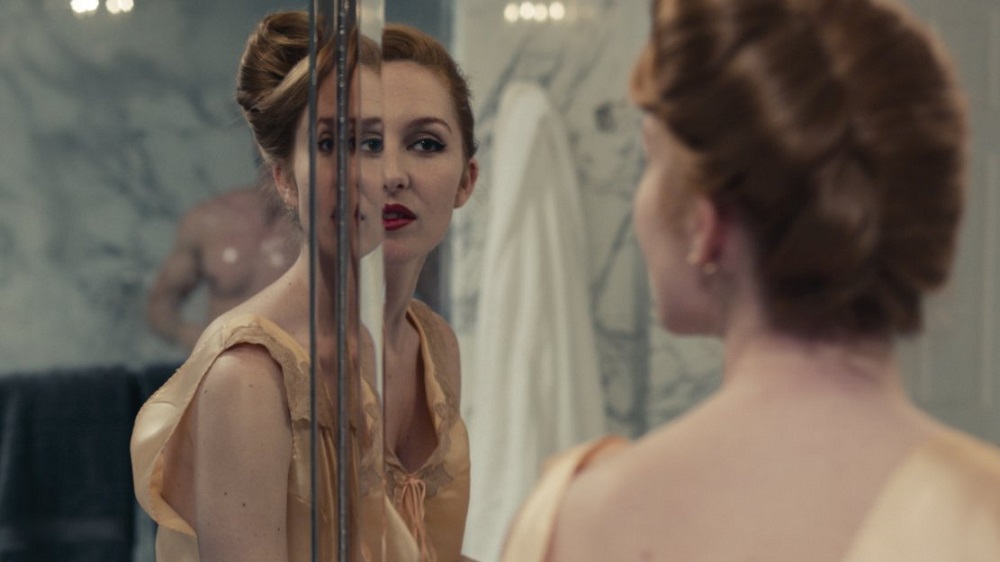 Djuna (Joséphine de La Baume) lives alone. She is a vampire, and not wanting to inadvertently feed upon a human or fall in love with someone who will not be able to join her on her never-ending jaunt through time she eschews contact with the living if she can help it, choosing to mingle almost exclusively with those of her own kind instead. 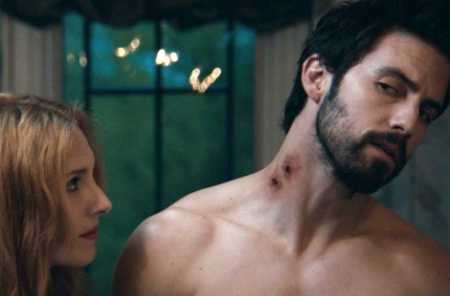 Paolo (Milo Ventimiglia) is a Hollywood screenwriter looking for some peace and quiet while he finishes work on his latest script. He is immediately drawn to the mysterious Djuna, the pair inadvertently crossing paths in a video store while perusing the aisles. At first she attempts to shoo him away, knowing getting too close could lead to danger. But very quickly his advances become impossible to ignore, the pair engaging in a ferocious affair leading the writer to darkly lit places and a clandestinely close-knit world he beforehand never could have imagined existed outside of gothic fairy tales.

At first the pair’s undead reverie is unmatched, Djuna certain she’s found a partner she can happily travel through the centuries with, while Paolo begins to understand the deepest desires in his own soul in a way he never has before. But things change the instant the ferociously diminutive Mimi (Roxane Mesquida) enters their lives. Djuna’s younger sister, this vampire doesn’t care about rules, doesn’t mind if she makes waves and has no problem taking lives in order to feed her voracious hunger for carnage and blood. It’s a combustive mix that threatens, not only her sister’s newfound happiness, but also the vampire community at large, and if something isn’t done soon the world will come to realize the supernatural isn’t as fictitious as the storybooks and fantasies have led everyone to believe.

In all honesty, that’s a pretty long-winded synopsis for a motion picture that’s actually pretty simplistic and straightforward. For all its pretty surrealistic flourishes, for every one of its painterly esoteric bits of sensual imagery, writer/director Xan Cassavetes’ narrative debut Kiss of the Damned is as simplistic as they come.

Maybe too simplistic. The ephemeral nature of the narrative can be, especially during the initial act, annoying, Djuna and Paolo falling into one another’s arms more because the story requires them to and not because honest emotions are being explored. Cassavetes crafts images European horror titans like Dario Argento or Mario Bava would be proud of, yes, but in the process she also keeps things so threadbare and beneath the surface putting pieces together is a lot more annoying and difficult than it potentially needed to be.

At the same time, the filmmaker gloriously recalls numerous genre entries of the 1970s, most notably Roy Ward Baker’s Hammer Studios classic The Vampire Lovers and Harry Kümel’s Daughters of Darkness, while Tony Scott’s 1983 cult favorite The Hunger is paid homage to as well. Better, echoes of 1992’s Damage can be found throughout, Djuna and Paolo’s lust-filled initial courtship as potentially devastating and destructive as anything to be found in that fondly remembered Louis Malle-directed melodrama.

But it is the introduction of Mimi and the monstrously carnal energy of Mesquida that eventually turned me into a fan of the film. She is the seductively dangerous dynamo around which all that happens in the final two acts revolves, her decisions and choices the ones that lead everyone she comes into contact with towards their potential ruin. She revels in Mimi’s depravity while also finding the lost humanity lurking at the bitter bottom of her twisted and polluted soul, giving the movie the electrical spark it needed to propel things towards becoming memorable and worthy of discussion.

In fact, save for a supremely brief supporting turn by a lovably oafish Michael Rapaport, this is a movie undeniably dominated by its female cast members. Mesquida and de La Baume are instantly magnetic, and from the moment each of them walks onscreen together my eyes never wanted to drift away from either actress. Then there is Anna Mouglalis as the pair’s mysterious benefactor Xenia. She oozes a carnal sensuality mixed with a cunning intellect, making her eventual manipulation at the hands of one of her so-called “children” all the more stunning. 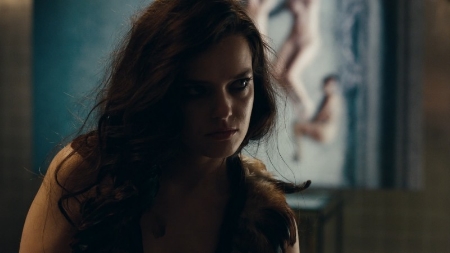 Cassavetes directs with confidence, spinning her yarn exactly as she means to even if all the pieces aren’t present enough to make the fitting of them together possible. Her visual sensibilities fit the proceedings magnificently, however, she and cinematographer Tobias Datum (Smashed) creating a visual milieu that is both a glorious homage to the films they’re echoing while also decidedly unique to the story being told. The mood is spot-on right from start, and when it  is coupled with Steven Hufsteter’s aggressively retro, sonically diverse score the overall effect is astonishing.

It’s far from perfect, and many will find Cassavetes’ overly evanescent script to be something of a major stumbling block (as can be Ventimiglia’s frustratingly one-note performance, the only weak link as far as the cast is concerned). Still, for my part I found the highs generated by the lusty mood and vivacious visual ingenuity, as well as the mesmeric savagery of Mesquida and de La Baume, went a long way to masking film’s shortcomings. Kiss of the Damned shows that Cassavetes is worth keeping an eye on, her gorily sexual debut a vampiric fairy tale that the more I think about it the more in rapture of the film I slowly become. 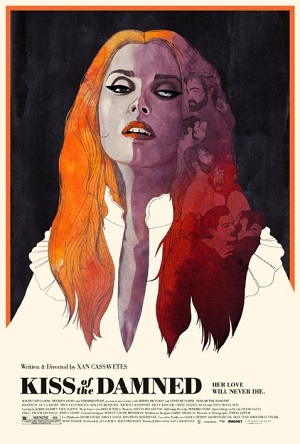