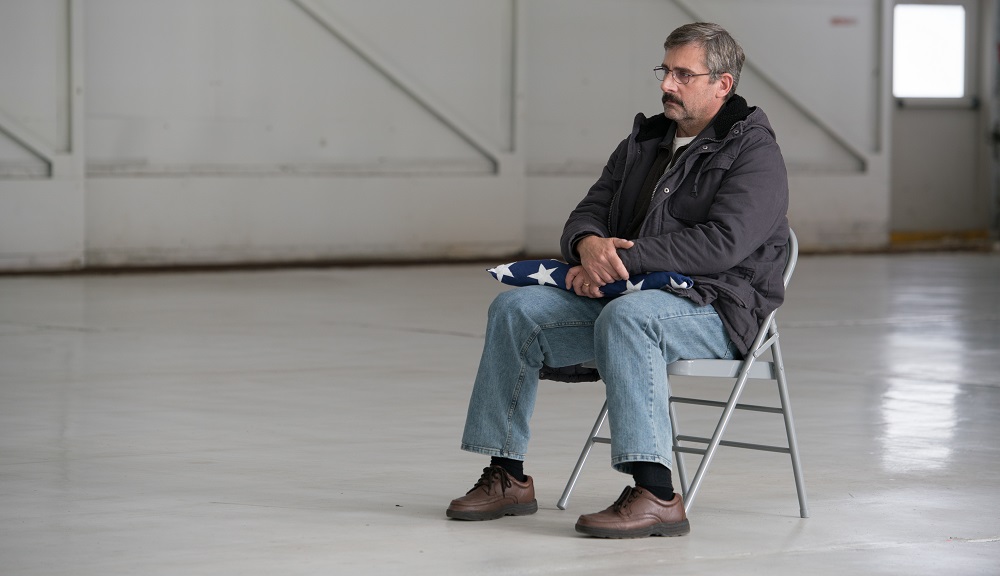 Thirty years after they served together during the Vietnam War, onetime Navy Corpsman Larry “Doc” Shepherd (Steve Carell) and former Marines Sal Nealon (Bryan Cranston) and Reverend Richard Mueller (Laurence Fishburne) are unexpectedly reunited. Doc has sought these two men out, compelled to find them in the wake of an unspeakable tragedy he isn’t certain he can face on his own. You see, his only son is dead. He was a Marine fighting in Iraq and the military is preparing to bury him with full military honors at Arlington National Cemetery. Doc wants Sal and Richard to accompany him as he goes on a journey to lay his boy to rest, hoping that the past they shared will be enough to convince them to assist in this heartrending endeavor. 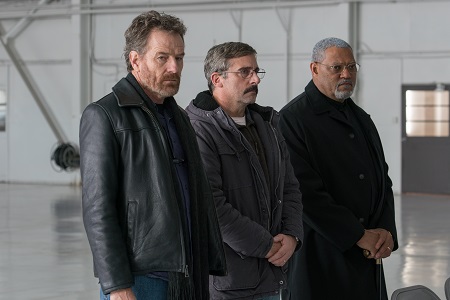 More a spiritual sequel to Hal Ashby’s 1973 classic The Last Detail starring Jack Nicholson, Randy Quaid and the late Otis Young than it is a direct continuation, Richard Linklater’s Last Flag Flying is a movingly meditative drama full of heartbreaking insight and cathartic truth I found extraordinary. It is a story of service and friendship that transcends the simple story at its center to become something deeply personal and emotionally affecting, the level of introspective honesty on display throughout altogether staggering. This movie moved me to tears while in the same breath it had me laughing out loud, everything building to a stunningly personal denouement that left me speechless.

Working with author Darryl Ponicsan to craft the screenplay, Linklater doesn’t try to obfuscate any of this story’s more intimate particulars. Instead, things are purposefully straightforward right from the jump. Doc needs help. He shares a history with Sal and Richard they’d rather not talk about but one that both men still refuse to run away from. Thirty years on, they still don’t know what they went to Vietnam to fight for. Now, in 2003, they don’t know why Doc’s son was in Iraq or what it was he laid down his life to protect. Yet all of them refuse to bend and they have no desire to break. They will do what is right, selflessly continuing to serve their country and their fellow soldiers best they know how even if their own days of military service are long behind them.

Equal parts funny, perceptive, heartbreaking and emotional, Linklater and Ponicsan have no wish to preach even if their opinions as to the validity of these two wars aren’t ever in doubt. Instead, they want to examine these men, long to get inside their heads and figure out what it is that continues to propel them forward even if the ghosts of the past and tragedies of the present conspire to rip them to shreds. The trio’s conversations sparkle with an introspective truth that is frequently startling, while at the same time also showcases a cheery comradeship that even the passage of three decades of life as strangers hasn’t been able to blunt.

Unsurprisingly this is a major showcase for the three actors. Cranston is magnificent, his epically exuberant performance a verbose cavalry charge of truth and consequence that’s a consistent marvel. He’s matched by Fishburne, the two showcasing a Mutt and Jeff give and take that’s dazzling. These men may have gone their separate ways after they left the Marines, they may have pursued different agendas and goals in order to dull the painful memories of the mistakes they might have made, but that doesn’t mean they still don’t know one another better and more intimately then either would care to admit. Bravely going into interior places filled with darkness, pain and guilt, Cranston and Fishburne are extraordinary, and I could have watched an additional two hours of Sal and Richard on the road back home after they’ve finished assisting Doc in his mournful task. 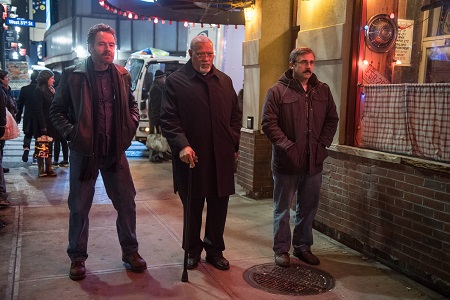 Carell might be even better. Doc spends much of the movie playing things close to the vest, containing his grief inside as the trio makes the slow trek to bury his boy with the respect and the dignity he deserves. It’s a thoughtful portrait, his character having a complicated backstory that includes the man overcoming a dark cloud of disgrace born from his time with Sal and Richard in Vietnam and becoming a valued and respective member of his community. Carell’s eyes speak volumes, the emotions flowing out of the actor sending chills up and down my spine on more than one occasion, and even just a simple moment where Doc must decide whether or not to bury his son in his military dress or in civilian attire bringing me to tears with winsome grace.

Linklater structures his film in much the same manner he did his classic trilogy of Before Sunrise, Before Sunset and Before Midnight, absolutely unafraid to showcase a dialogue-driven drama where ideas are discussed with complex intelligence. He and Ponicsan find humor in the most unlikely of places yet at the same time never belittle or make light of the darker facets of the story they are telling. They allow for moments of humanity to break through in ways that are startling, gifting young actor J. Quinton Johnson with a key supporting role as a soldier tasked with assisting in the transport of the body that’s far more emotionally resonant than I initially imagined it was going to be. Last Flag Flying is a masterful motion picture, watching it unfold for the first time a pleasurably moving joy I’ll treasure for many years to come. 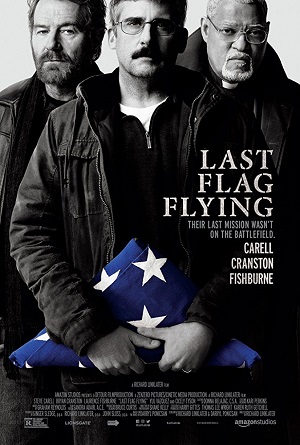