In many ways Locke is the thriller of the year, a real time, ticking clock masterwork of tension and suspense that’s as unrelenting and unmerciful as anything likely to see a release in all of 2014. In others, it is nothing more than a quickly paced melodrama of responsibility and regret, focusing entirely on a single character, the choices he has made and the price he is forced to pay when the bill for his self-centered actions come tragically due.

Academy Award-nominated screenwriter Steven Knight’s (Dirty Pretty Things, Eastern Promises) second film as director is a revelation, detailing a single 90-minute slice-of-life as a mild-mannered, elegantly reserved and highly intelligent construction foreman makes a choice that changes his life forever. Set inside a car making an evening trek to London, the whole thing is a series of phone conversations, nothing more, certainly nothing less, each one detailing a string of problems the protagonist is desperately, yet calmly, trying to find ways to overcome.

Things center on Ivan Locke (Tom Hardy). The night before the biggest construction job of his life – he’s supervising one the largest non-governmental concrete pours in recent history – he makes the decision to drive to London. It’s a trip that will take roughly an hour and half yet the repercussions of going will last a lifetime. On the way there he must contact his wife and come clean with a startling revelation, speak with his boss and let him know what is going on while also communicate with his second-in-command in order to get him ready to handle the job without him. He will have conversations with his children. He will speak with random local politicians to erase last second problems. He will even talk with the nurses and the doctors at a London hospital about the reasons he’s rapidly heading in their direction.

That is the movie. There is no bomb. There is no despicable villain holding a loved one at gun point. No one is dying. The traditional tropes around which these types of scenarios typically surround are nowhere to be found. Knight has crafted an innately personal story of a man coming to grips with his mistakes and doing what believes is the right, consequences be damned. This is a stream of consciousness drama where so many little things; the score of a soccer match, local police remembering to cordon off the correct streets, the density and thickness of the concrete before it can be poured, so on, so forth; all end up being more than the sum of their parts, and as such I found myself inching closer and closer to the edge of my seat the nearer Locke came to his preordained destination.

Hardy is brilliant. Channeling the ghosts of Richard Burton and Alec Guinness, his Ivan Locke is a paragon of British stiff upper lip-ishness, cool and confident under pressure doing all he can to make it sound and seem like nothing happening is actually getting to him on a visible level. But Hardy allows the emotional maelstrom to rumble and course through every pore, the frosty demeanor sheltering unspeakable turmoil, hearing his timber waver as his youngest recaps the televised soccer match or watching him clench as he tries to remain composed as he lets his wife know exactly what is happening and why he’s doing what his is unimaginably painful.

The rest of the cast consists of voices on the phone but that doesn’t mean Knight doesn’t give them due respect. Brit character actors like Olivia Colman, Ruth Wilson, Andrew Scott, Danny Webb and Tom Holland all make appearances, their impact throughout undeniable. Wilson, in particular, has a handful of spectacular moments, her final conversation with Hardy sending shudders through my system I was feeling hours afterwards.

Knight understands and realizes it is the everyday that can be the most suspenseful, that the choices we make second-to-second and hour-to-hour are oftentimes more thrilling than anything our most fanciful imaginations can conjure up. Locke is an extraordinary adventure that takes the mundane, twists it into knots, magically transforming it into something mesmerizing and masterful, the journey it ultimately took me on one I almost didn’t want to see come to an end. 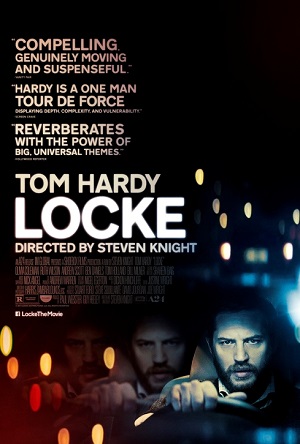