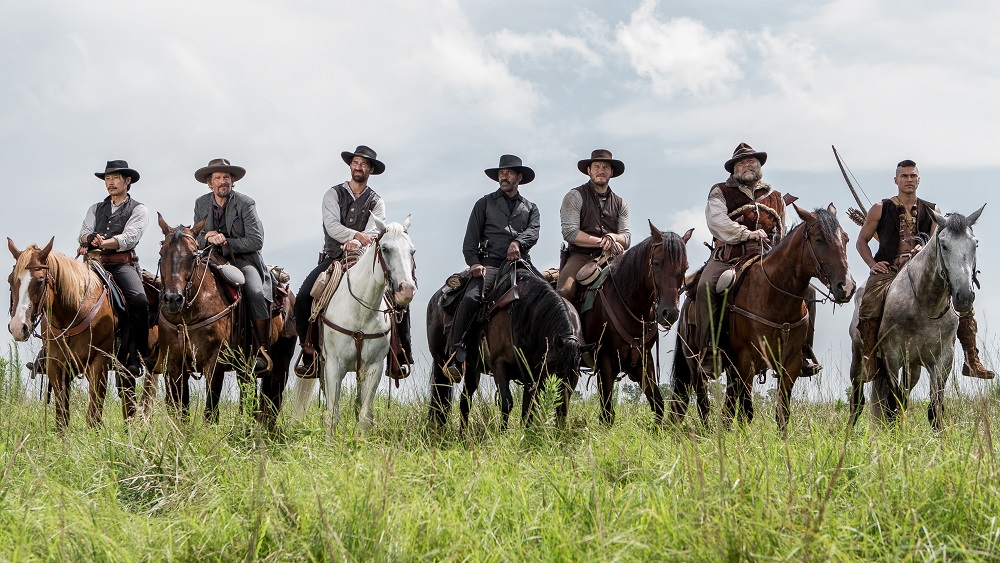 Director Antoine Fuqua’s (Training Day) version of The Magnificent Seven isn’t particularly interested in reinventing the tried and true story its few against many heroics are built upon. It follows the familiar footsteps laid down by Akira Kurosawa’s towering 1954 classic, Seven Samurai, as well as its 1960 all-star Hollywood remake directed by John Sturges. While Nic Pizzolatto (“True Detective”) and Richard Wenk’s (The Equalizer) script is certainly built in large part on the political here and now, the basics haven’t changed a single solitary bit. This is still a tale of hard, close to broken men teaming together in a search for redemption, attempting to liberate a small, secluded town from the grip of a murderous thug and his army of killers in order to earn it. 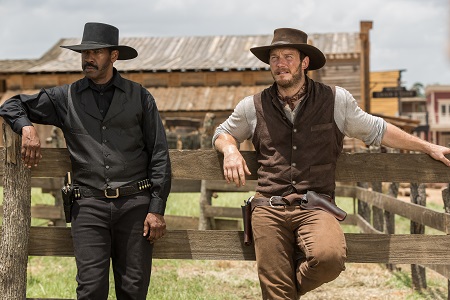 The besieged town in question here is Rose Creek, a small community of peaceful farmers whose land just happens to reside right next to the profitable mine owned by unscrupulous businessman Bartholomew Bogue (Peter Sarsgaard). After he informs residents he will be taking their land, expecting them all to take a $20 buyout or else, recent widow Emma Cullen (Haley Bennett) takes it upon herself to hire gunslingers to help the town protect itself. The man she turns to, seasoned bounty hunter and sometimes lawman Sam Chisolm (Denzel Washington), has his own reasons for wanting to take on Bogue, and in turn agrees to help the young woman and subsequently goes about assembling a small cadre of gamblers, soldiers, trackers, Indians and outlaws to help him do it.

It all goes as expected from there. Chisolm finds six others to join the cause, gambler Josh Faraday (Chris Pratt), Confederate sharpshooter Goodnight Robicheaux (Ethan Hawke), assassin Billy Rocks (Byung-Hun Lee), tracker Jack Horne (Vincent D’Onofrio), outlaw Vasquez (Manuel Garcia-Rulfo) and ostracized Comanche Red Harvest (Martin Sensmeier). For reasons entirely their own, each agrees to help, all of them journeying to Rose Creek to stop Bogue and give the citizens back their town.

There are no surprises where all of this is going to end up, and it’s not particularly shocking which members of the gang don’t end up surviving all the way until the end. As for the final showdown itself, there’s a bizarre stupidity to Bogue’s battle plan that’s moderately silly, resulting in him making a decision near the end that’s close to laughable. It’s a weakness that the film itself is never entirely able to overcome, lessening my emotional investment in the eventual outcome a substantial amount. 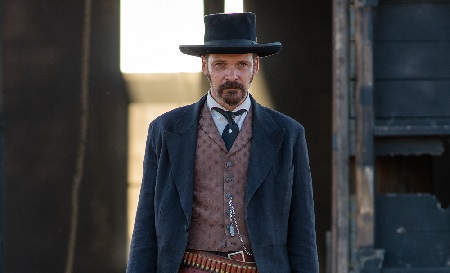 Thankfully, the movie itself is so entertaining and is made with an old school sturdiness that is so continually compelling, its readily apparent shortcoming are far easier to dismiss than by all accounts they should be. Fuqua, eschewing the overwrought visual theatrics that have handicapped the majority of the films he’s handled, has obviously done his homework, his staging of the various gunfights and action beats bordering on superb. He and cinematographer Mauro Fiore (Southpaw) utilize their frame beautifully, while editor John Refoua (Olympus Has Fallen) keeps his cuts to a minimum, thus allowing sequences to play themselves out with organic ferocity.

The picture is also extraordinarily well cast from top to bottom, pretty much every part filled with someone worthy of keeping an eye on even if they’re only around for a minute or two. If anything, Washington, who is still his typically sturdy, magnetically appealing self, is the one who ends up being the least interesting member of the ensemble, if only because his character is the more traditionally straightforward one, at least as far as the central seven gunslingers are concerned. Even so, he still manages a handful of memorable moments, not the least of which is his initial appearance chasing down a bounty in a bar, to a third act conversation with Hawke that hints at an intriguingly complex relationship I’d almost love to have known more about.

But he’s upstaged by the remainder of the cast. Hawke is wonderful, his heartsick melancholy masking a hidden pain that’s palpable. Pratt steals scenes left and right, while Lee is a charmingly balletic rogue whose quiet demeanor deftly masks a lethal confidence that’s positively awesome. As for Sarsgaard, he presents the mustache-twirling Bogue as a 19th century Donald Trump, his capitalistic robber baron an amoral crusader for a version of the American Dream that crushes any and all who foolishly stand in his way. Best of all is D’Onofrio, his feral tracker a mesmerizing hoot who appears to have stepped out of a different, utterly whack-a-do Western entirely, quickly becoming impossible to take one’s eyes off of no matter what else might be going on. If Fuqua ever decided to make a movie about the character and his adventures before this story takes place, I’d not only want to watch it, I’d probably camp outside the theatre so I could be there for the very first showing. 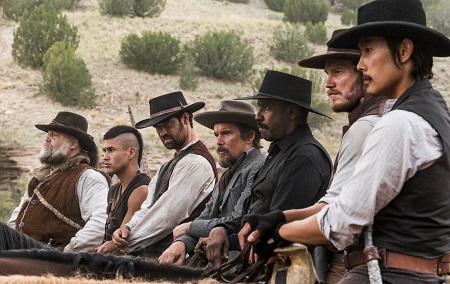 Other aspects I liked? The late James Horner’s (Titanic, Aliens) final score, completed by frequent collaborator Simon Franglen (Avatar, The 33), pays subtly deft homage to Elmer Bernstein’s classic theme from the 1960 Hollywood remake throughout, while Derek R. Hill’s (Into the Wild) suitably austere production design pops off the screen with realistic sturdiness. Sharen Davis’ (Dreamgirls) costumes are also excellent, as are the grungy, mud and blood-smeared makeup and hair designs, everything combining together in a way that is instantly indelible.

Does part of me wish Fuqua, Washington and all the rest of their compadres would have pooled their talents to create an original Western and not a remake of a remake of a story that’s presented in various fashions so many times before I can hardly count them all? Sure I do, that almost goes without saying. Same time, this new take on The Magnificent Seven has just enough charm and more than its share of idiosyncratic flourishes its existence is hardly bothersome, and even with its fair share of shortcomings the entertainment factor remains high enough throughout to make giving it a shot exceedingly worthwhile. 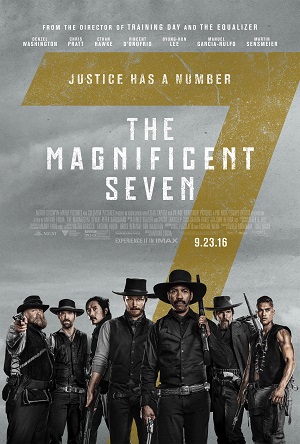