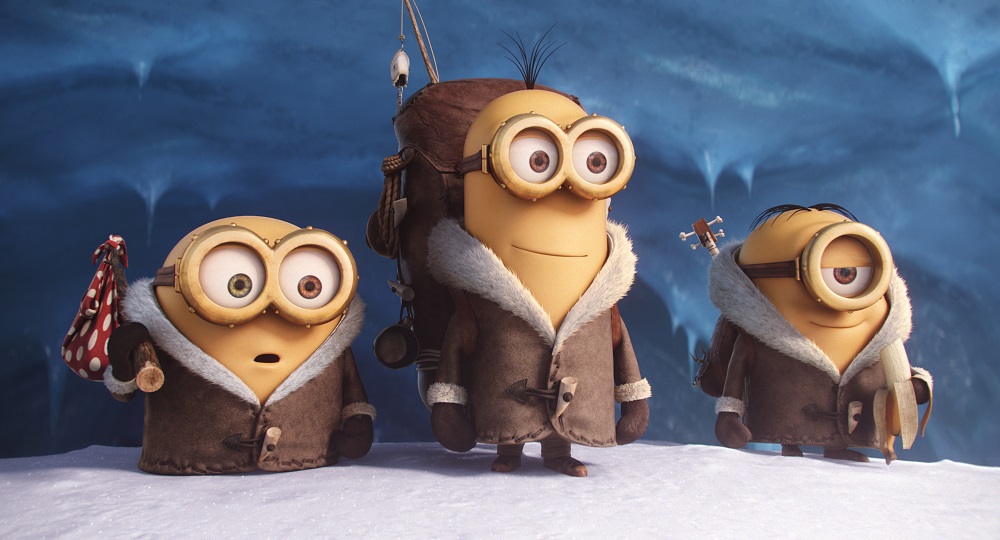 Long before they gleefully aided supervillain Gru in various despicable deeds including an attempt to steal the moon, in actuality since the dawn of time itself, Minions (all voiced by co-director Pierre Coffin) had long roamed the Earth looking for someone (or something) truly evil to be their Boss. After a millennia hiding out in a cave in the Antarctic, growing bored without anyone (or anything) to serve, one of their members, Kevin, takes it upon himself to go out into the wild in order to find a new nefarious master. With Bob and Stuart by his side, this brave Minion sets out into a much changed world – there were cavemen running around the last time they went outside – confident they will find a new Boss thus saving their fellow eager-to-serve compatriots from an unending lifetime of directionless boredom. 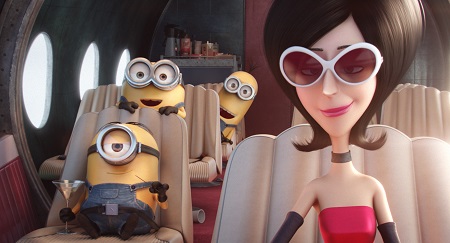 In essence, Minions isn’t so much a Despicable Me spin-off as it is a prequel to the events that took place in that surprise 2010 animated hit. Set in 1968, mostly taking place in a swinging, very groovy London (with brief forays to New York and Orlando), featuring an eclectic soundtrack of some of the era’s greatest hits, the movie offers up a number of visual delights and whimsical eccentricities sure to keep the younger members of the audience elated. It moves quickly, Coffin and fellow director Kyle Balda (The Lorax) refusing to let the pace slacken, while the computer animation bringing everything to life is impressive in ways neither of the previous two films featuring these pint-sized characters could boast.

Even so, I’m hard-pressed to believe adults are going to be all that eager to stay with their kids for all 91 minutes of this one. Featuring a dull, not particularly evolved screenplay that’s barely serviceable, offering up human characters too one-dimensional and shockingly unlikable to even moderately care about, what is left are a series of comedic sketches featuring Kevin, Bob and Stuart engaging in all types of silliness. While that can be fun, while there is amusement to be found in watching this happen, there’s not enough of it to warrant an entire feature devoted to it and to these characters alone. It’s a waste of time, and how anyone over the age of eight or so is going to think otherwise I simply do not know.

There is something of an actual plot, the world’s self-proclaimed first female supervillain, Scarlet Overkill (Sandra Bullock), tasking the three Minions to steal England’s Crown Jewels for her so she can become the new Queen. Along the way Bob inadvertently becomes King himself (don’t ask), while the remaining Minions back in the Antarctic learn of their brethren’s supposed success in finding a new Boss and decide to make the long trek to London in order to aid them in their crony duties. There are lava lamp guns, levitating couture dresses and machines that make the miniscule massive, all that and more happening for no other reason than the filmmakers think audiences might be amused if they do.

For my part I cannot say that was so. The Minions, much like the acorn-chasing Scrat from the Ice Age franchise, work best in short, controlled bursts of mayhem, so designing an entire feature around them probably wasn’t a terrific idea right from the start. More, the old school mixture of “Loony Tunes” meets “Tom & Jerry” crossed with Buster Keaton slapstick just doesn’t work nearly as well as the filmmakers intend, the violence and sexually-charged elements more akin to “Itchy & Scratchy” than a Bugs Bunny or Road Runner cartoon classic. It’s a little unsettling, if I’m being honest, and I’m not entirely certain I’d want to explain some of the more colorful innuendos to a questioning four-year-old if they should happen to ask about them.

I do love the opening, a quick montage showcasing Minion evolution from single-celled organisms to their full-sized birth into a carnivorous world they’re overjoyed about helping the most loathsome rule. Some of the stuff happening in the Antarctic cave is a hoot, a game of soccer played with all the enthusiasm of a comatose inchworm eager to bake itself to death in the sun also getting me to chuckle somewhat loudly. There are also a handful of additional sight gags sprinkled throughout that can’t help but amuse, while the central trio of Kevin, Stuart and Bob do manage to craft completely distinct traits and characterizations utterly unique to and of themselves.

None of which makes the movie less of a half-baked waste of time. Featuring an eclectic all-star voice cast (that includes Michael Keaton, Jon Hamm, Allison Janney, Steve Coogan, Jennifer Saunders and Geoffrey Rush) that don’t get near as much of an opportunity to shine as you’d hope they would, with Bullock mostly phoning in her work as the central villainess, there’s little to distract from just how pointless this animated exercise proves to be. While I still like the Minions themselves, I can’t say the same about Minions the movie, and in the end all I’d really like is to pretend it doesn’t even exist, hopefully forgetting about it as soon as I finish writing this review. 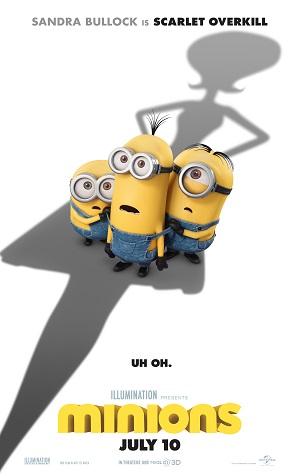