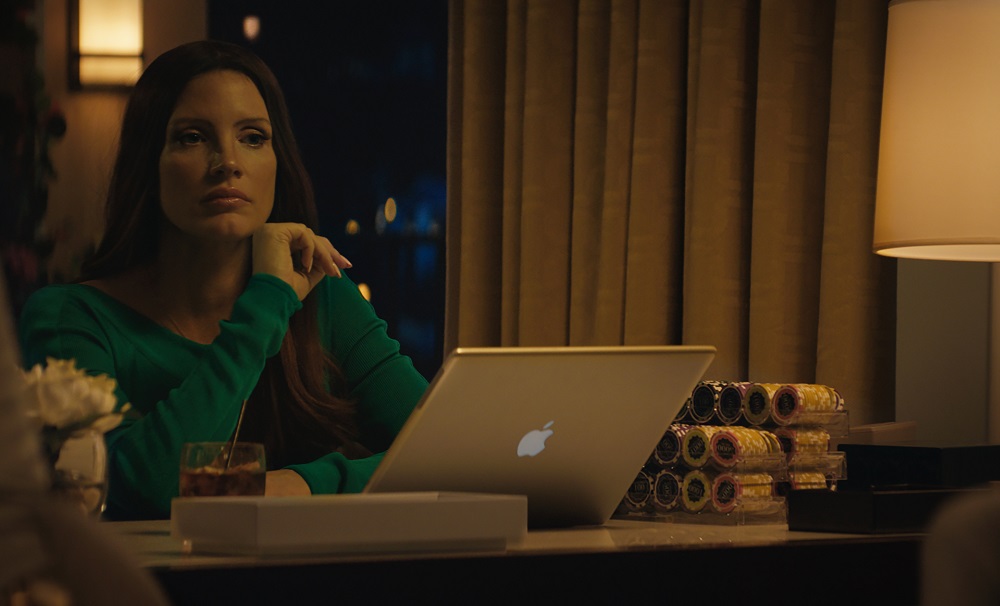 After her Olympic dreams are shattered by an accident during a qualifying run, world-class skier Molly Bloom (Jessica Chastain) has to rethink what she wants to do with her life. Not feeling like she wants to go straight into law school as originally planned, she instead heads to Las Vegas and finds herself assisting in the production of a high-end underground poker game. Discovering she’s got a knack for this sort of operation, she moves the action to New York and goes into business for herself, in the process catching the eye of the FBI. 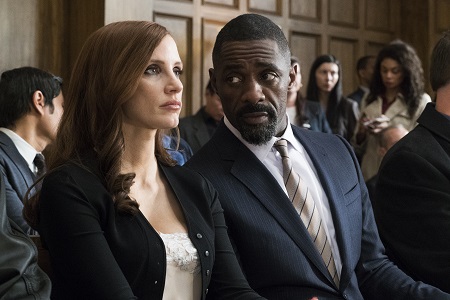 Fast-forward a few years and Molly finds herself under indictment, the U.S. Government particularly interested in whether or not the games she set up involved the Russian mafia. Turning to straight-laced defense attorney Charlie Jaffey (Idris Elba) for assistance, the incredibly intelligent woman, dubbed the “Poker Queen” by the news media, is determined to prove she’s done nothing wrong. But with the massive amounts of money she’s made coupled with the underground nature of her business, few believe Molly has done nothing wrong. Still, make no mistake, while her Olympic dreams might have been shattered, this woman has the heart of a champion, proving others wrong a mission she’s demonstrated time and time and again to be exceptionally good at.

Based on Bloom’s own best-selling memoir, Academy Award-winning screenwriter Aaron Sorkin (The Social Network) makes his directorial debut with the fast-paced, intellectually curious drama Molly’s Game. As a showcase for two-time Oscar-nominee Chastain, this motion picture is pretty much perfect. As an in-depth examination of hubris run amuck, it’s almost equally as successful. But as a cohesive story that works start to finish? Sadly, Sorkin’s effort comes up just a tiny bit short, the last third something of a minor, obvious and moderately didactic conversation that spells things out much too clearly and in a way I didn’t feel worked.

Until then, though? Wow, is this film terrific. Sorkin’s dialogue crackles with the electricity one expects from the celebrated screenwriter, and it’s obvious both Chastain and Elba relish being given the opportunity to devour each and every syllable. Even better, he crafts a marvelously complex character for the actress to portray, all of her dexterous talents on sparkling, effervescent display. Chastain brings an athletic physicality that’s entirely appropriate considering Molly’s Olympic-level background. Better, she doesn’t skimp on the woman’s obvious intellectual agility, either, the confidence she saunters into the room with both a positive and negative she spends the entire story learning to utilize to her advantage. It’s mesmerizing stuff, and if Chastain were to sneak her way into an Academy Award nomination I wouldn’t even remotely complain.

Elba is almost equally as good, and I love the way that Sorkin refuses to treat his character as an afterthought. The way in which Jaffey’s preconceptions are smashed are valid in their minutia. His becoming a champion interested in fighting for her innocence doesn’t happen right away and it isn’t easy to come by. I adored how he examined every facet of his potential client’s personality, allowing her vocal defense of her actions as a poker impresario to meld with how she interacts with his own daughter Stella (Whitney Peak) as well as the decisions she makes outside of the case to all influence his opinion. Elba’s piercing gaze doesn’t miss anything which allows his passionate climactic monologue to pack the type of emotional wallop that was both startlingly unexpected as well as indisputably deserved.

There are also a number of winning supporting performances, the most essential coming from Michael Cera. Portraying an unnamed movie star and referred to as “Player X,” he’s the key component that allows Molly’s poker game to flourish. He’s also the one whose own cynically selfish aggressiveness leads to its downfall. Cera goes for broke, and it’s clear there’s something going on with this guy that’s not above board. But his crookedly confident magnetism is undeniable, as is the way he just seems to let events, not matter what they are, to fall off his back as if they’re nothing to worry about. It’s a devilish balancing act, and the way in which Cera twists the knife at just the moment when it will do the most damage had me dumbfounded in awe. 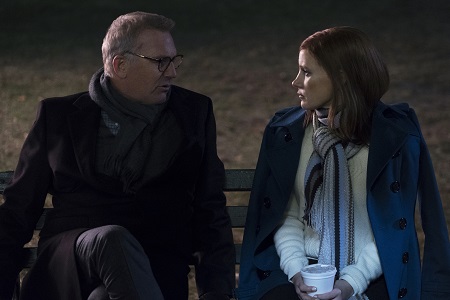 All of which had me convinced I was going to love Molly’s Game in a way I have for few other 2017 releases. Even at well over two hours in length, the film’s frenetic pace and energetic vitality had me sitting on the edge of my seat in rapt fascination. But then, right as things are hurtling towards their conclusion, at the exact moment when I don’t need things spelled out for me or explained in condescending, moralistic detail, Sorkin stages a moment where Molly’s estranged father Larry (a charismatic Kevin Costner) sits there and tells his daughter everything that’s gone wrong in her life and why. It’s supposed to be this moment of understanding and forgiveness between the two. Instead, it feels horrifically patronizing, and if any person didn’t need some man to walk along and tell her what is going on and why it is it’s undeniably Molly.

Nonetheless, Sorkin’s debut behind the camera is still impressive. He utilizes his crack ensemble cast flawlessly while at the same time remembering to leave plenty of room for his star to stand at the center of the room and shine. More importantly, he never underestimates the intelligence of the audience, refusing to dumb things down, consistently assuming everyone watching can keep up without falling behind. If Molly’s Game doesn’t quite have what would typically be considered a winning hand, it bluffs just well enough to still take the pot, proving that a pleasant smirk and a little underhanded double-dealing isn’t always as terrible a thing as it should be. Heck, sometimes it might even be construed as charming. 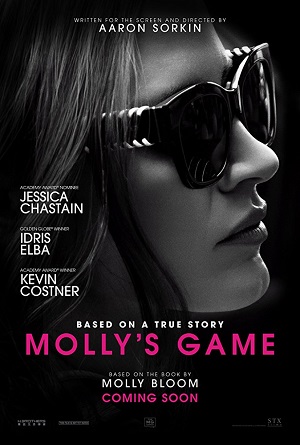