In a time long past, before fairy tales and magic vanished into barely remembered myth, the worlds of human and monster sat in uneasy truce one against the other. But when the baby Wuba is born from a human host, implanted in his belly by the mortally wounded Monster Queen herself, the balance separating the two worlds begins to crack. This man, Tianyin (Boran Jing), a timid village mayor, is thrust into a spotlight he never wanted to be centered within. He is aided by second-level monster hunter Huo Xiaolin (Baihe Bai), a cunning warrior who initially wants to sell the baby for profit but soon comes to care for its wellbeing same as its perplexed father seems to. 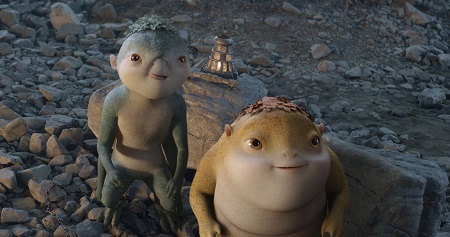 What neither is aware of is that they have inadvertently stumbled into a massive battle concerning the fate of monster and human alike. An evil overlord wants to eat the little guy, charging many of China’s wealthiest citizens a hearty sum to join him for the feast. There is also a pair of bumbling monster protectors, often hiding in leathery human costumes, tracking Tianyin and Xiaolin’s steps ostensibly in a quest to save Wuba from harm. Finally, there’s a seasoned monster hunter (agreeably portrayed by veteran Chinese character actor Eric Tsang) also hot on their trail, knowing the profit for bringing the baby Monster King to market will undoubtedly be substantial.

The family-oriented 3-D fantasy-adventure Monster Hunt is the highest grossing film in Chinese box office history. It’s a loopy, utterly bonkers excursion into unabashed weirdness with odd, slightly startling forays into violence and tragic melodrama that couldn’t help but take me by surprise. But it is also incredibly creative, a melding of Hollywood hokum and Asian supernatural kookiness that’s kind of wonderful, and while obviously engineered to delight children I’m still hard-pressed not to say there’s plenty here adults will likely enjoy as well. It’s a fun frolic, if also total nonsense, and while I’m certain portions were lost on me in translation overall I had a good enough time watching it I’d be curious to see how it would play with those three decades my junior. 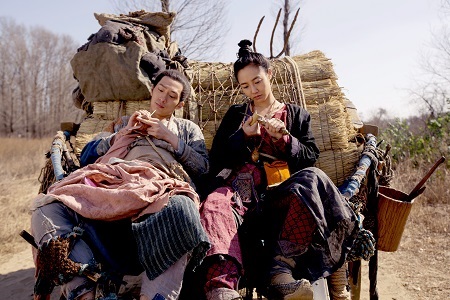 There are musical numbers. There are special effects sequences that play more like cut-scenes from “Adventure Time” than they do anything organic to the story being told. There is an entire sequence that pokes genteel fun at a chef’s inability to cook Wuba while she also talks to other prepubescent monsters about their own imminent demise. Topping it all, a birthing sequence with Tianyin that’s absolutely cuckoo, the way the little Monster King comes into the world an eye-popping peculiarity that must be seen to be even vaguely believed.

Director Raman Hui is a veteran Hollywood animator who has worked on everything from Antz, to Shrek, to Madagascar, to Puss in Boots, to finally being the animation director for the How to Train Your Dragon television spin-offs “DreamWorks Dragons” and “Dragons: Race to the Edge.” It shows, both positively and negatively, the fact he often lets things lapse into anarchic chaos for no other reason than he seemingly can falling on the latter end of that spectrum. But he also developed a solid handle on time and space while working for DreamWorks, showing a cagy ability here to use the cinematic frame in ways that are continually intriguing that I was impressed by. The movie is a mixed bag, but one filled with imagination and ingenuity, and as such as nuts as Monster Hunt proves to be it’s also just enjoyable enough to make dealing with its wildly perverse lapses into pandemonium worth enduring. 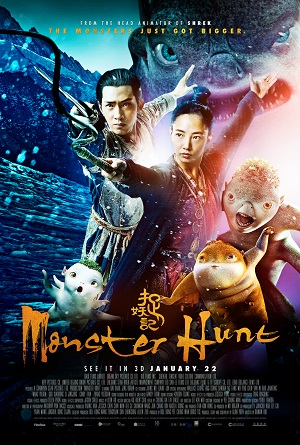