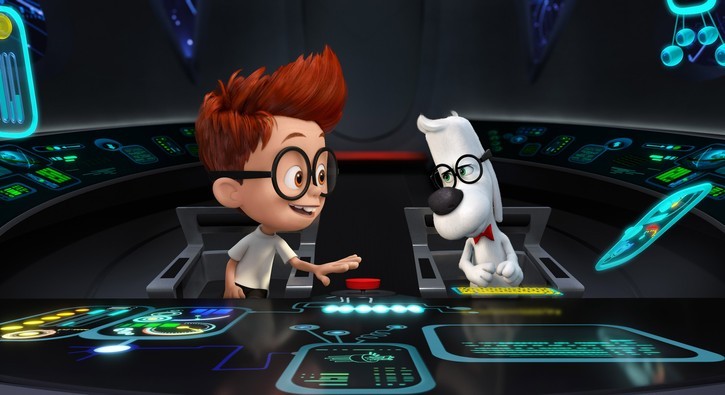 After the opening prologue to DreamWorks’ Mr. Peabody & Sherman I was deathly afraid I was about to watch an animated movie that was going to outright murder a beloved piece of my own personal childhood. The first act of the movie, set in and around Marie Antoinette’s pre-revolutionary France (pre only by a scant few moments, in point of fact), are horrendous, loud, shrill, obnoxious and forced in ways that were instantly off-putting. I was uncomfortable and upset in ways I could barely comprehend, and as the movie was going to run for an additional 80 minutes I was pretty much positive I was about to be in for an abnormally long afternoon at the multiplex.

Then something happened. As soon as our lead character, super-smart, inventively loquacious and atypically fond of puns canine Mr. Peabody (voiced by an unrecognizable Ty Burrell), and his “pet” adopted boy Sherman (Max Charles) return home to modern day New York City things magically take a turn. Suddenly this movie, inspired by the acclaimed shorts created by Jay Ward featured as part of “Rocky and His Friends” and “The Bullwinkle Show,” directed by Lion King and Stuart Little handler Rob Minkoff, written by “Dirty Sexy Money” scribe Craig Wright, is everything I hoped it would be, funny, inventive, smart, intuitive and genuine in all the ways that matter. 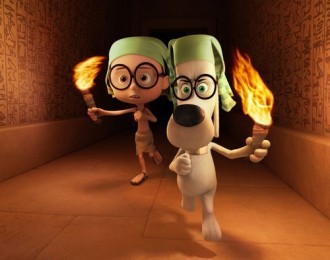 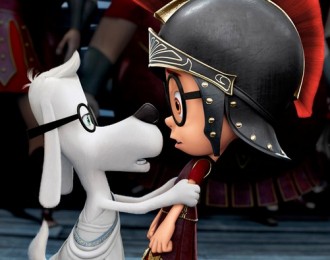 The shorts, there were over 90 of them, were inspired gems that never spoke down to children while at the same time treated parents with respect. They were wildly irreverent while also maintaining a fondness for historical accuracy (or, at the very least, something close to it), a combination that made each an idiosyncratic delight full of whimsical, and edifying, surprises. More than that, though, in their own way they also shed honestly ascertained parenting insights, the relationship between Mr. Peabody and Sherman as authentic and as well thought out as any network television animation has ever seen (and that includes both “The Flintstones” and “The Simpsons”).

Wonderfully, the movie embraces this esthetic, adding a plucky newcomer in the form of spunky, somewhat spoiled elementary school queen bee Penny Peterson (Ariel Winter) to the mix as the catalyst that gets the ramshackle, devil-may-care plot going at full speed. She’s the one that convinces Sherman to use Mr. Peabody’s time machine, dubbed the WABAC, against his adoptive father’s wishes. She’s also the one that forces them to get into all sorts of mayhem and trouble as the find themselves stranded outside the gates of Troy before a certain clandestine invasion and chatting with Leonardo da Vinci right before he paints the Mona Lisa.

But as much as she changes the game, the focus always remains where it needs to, and that’s squarely on the relationship between Mr. Peabody and Sherman, how they relate one to the other, neither taking their counterpart for granted as they navigate parent-child mechanics that are as timeless and as omnipresent as history itself. Throughout the eras, throughout all cultures, being a kid is a miraculous exploration, one that can be made spellbinding and inspirational with the right adult helping to lead the way. As for that parent, raising a child is a mind-boggling journey that rests uneasily upon an ever-changing learning curve, finding the confidence and hutzpah to face all the obstacles with love and acceptance no matter what a constant challenge.

It is here where Minkoff and Wright excel, making sure those indefinable yet instantly recognizable facets come to the forefront with an open heart and without any extra didactic padding or melodramatic pretense. Much like the original shorts, the pair do not talk down to children while also making sure to include numerous elements their parents will enjoy and embrace as well. It is this relationship between Mr. Peabody and Sherman, between father and son, that gives the movie its impetus, gives it its effervescent kick, and as such ends up being a thematic through line easy to embrace and even simpler, if you can believe it, this is a dog and his boy tale, after all, to relate to.

Unlike the shorts, however, history is played fast and loose and is more of the Bill & Ted’s Excellent Adventure variety than it is anything else, which in and of itself isn’t a bad thing, it’s just not a trait I found invigorating or, for that matter, interesting. There’s some nifty stuff in Egypt circa King Tut but it gets derailed by overblown pyrotechnics and Indiana Jones-like bits of daring-do that annoyed me more than they did anything else. Also, it took quite some time before I warmed to Penny, her character and demeanor initially too annoying for its own good.

Be that as it may, I liked Mr. Peabody & Sherman. It didn’t murder my childhood, didn’t derail my happy memories of watching “The Bullwinkle Show” in the morning before school in the 1980s. More than that, the movie allowed my imagination to soar while also bringing a semblance of comfort to my heart, even the missteps not derailing my enjoyment of the whole (save for that abhorrent prologue) one single bit. It’s a good movie and, in many ways, an even better update of a classic, iconic bit of animated television, and something tells me when I watch it again I’ll enjoy it even more the second time around. 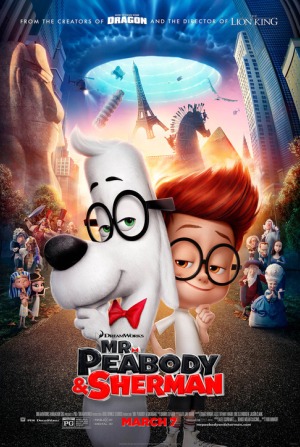