Let’s not mince words. As a kickoff to a proposed new series of films, dubbed the “Dark Universe,” featuring classic movie monsters ranging from Dracula, to Frankenstein, to even the Creature from the Black Lagoon, The Mummy is a very bad movie. If Warner Bros thought they had trouble getting their own DC Extended Universe started with the dual mediocrity of Batman v Superman: Dawn of Justice and Suicide Squad, they can take solace in the fact Universal Studios screwed the pooch even more severely with this 110-minute piece of desiccated trash. But where DC and Warner were able to rebound with last week’s Wonder Woman, this epic misfire is so unrelentingly terrible Universal might rethink their Dark Universe plans altogether, and it wouldn’t surprise me at all if the next installment, a remake of The Bride of Frankenstein with Javier Bardem due in 2019, suddenly gets put on hold.

Taking its cues from both the classic 1932 version starring Boris Karloff and the hit 1999 take with Brendan Fraser and Rachel Weisz, this new iteration of The Mummy features Tom Cruise as wisecracking adventurer, soldier and erstwhile looter of ancient antiquities Nick Morton. While on a reconnaissance mission in Iraq, he and his partner Chris Vail (Jake Johnson) inadvertently drop a Tomahawk Missile on an unknown Egyptian burial site, discovering an ancient sarcophagus buried deep within a pool of mercury. Under the direction of archaeologist Jenny Halsey (Annabelle Wallis), the find is brought up from the depths of the Earth and put on a plane for London, the trio having no understanding of exactly what it is they have accidentally discovered.

But the secretive Dr. Henry Jekyll (Russell Crowe) knows what is going on. More, he has a full understanding of the grave danger they have unwittingly unleashed upon humanity. Inside this coffin is none other than the Egyptian priestess Ahmanet (Sofia Boutella), an undead goddess with unbelievable power. She’s on a quest to give the ancient God Seth physical form, and it’s Nick’s body she’s decided to utilize as a host. Ahmanet will not stop until her quest is completed, the fate of the entire planet and all who live upon it in peril if she succeeds.

In all fairness, as far as plots are concerned that’s not really the worst one I’ve ever had to recount in one of these reviews. Problem is, the script, credited to David Koepp (Jurassic Park), Christopher McQuarrie (Jack Reacher) and Dylan Kussman, all working from a screen story by Jon Spaihts (Passengers), Jenny Lumet (Rachel Getting Married) and director Alex Kurtzman (Star Trek), is dead on arrival, the whole thing so shockingly stupid it’s a wonder how so many talented people could all have their hands in concocting something so relentlessly pedestrian. The characters have no depth. The tone shifts wildly from rollicking comedic adventure, to straight-ahead action, to campy melodrama, to horror-tinged mystery, all at the drop of a hat. It’s a mess, everything falling to pieces almost immediately.

What’s most jarring is how the movie treats its female characters. Boutella, a significant talent who made indelible impressions in Star Trek Beyond, Kingsman: The Secret Service and Monsters: Dark Continent, throws herself into the role of Ahmanet with carnivorous venom. But as spirited as her portrayal might be, the filmmakers still don’t seem to have the first clue as to how to utilize her. Her pain, her suffering, her disappointments and her regrets, all of them should be fueling her rage, helping her become an even more powerful villain as she succumbs to the darkness lurking within. But the script treats her only as a vessel to give Seth life, nothing more, her history a darkly brutal sideshow that sadly adds little that’s substantive to the overall narrative.

But she’s treated better than Wallis. Maybe it’s the film’s unfortunate timing to be released only a week after Wonder Woman, but even then it’s hard not to think this is one of the more regressive portraits of a female main character in a major motion picture in what feels like decades. Jenny Halsey is arguably the second smartest person in the entire film (behind the split personality Dr. Jekyll, of course). She’s also shown to be someone who stands up for herself, doesn’t take any guff and has the wherewithal to survive no matter the circumstance. Yet she’s treated as a stereotypical damsel in distress, needing to be saved at every turn. More than that, her input is continually belittled, her concerns left unheeded and her ideas constantly falling on deaf ears.

It does not help that she and Cruise share zero chemistry, which is surprising because I cannot think of a prior feature, even a train wreck like Cocktail, where this has been the case. But that could be because, for all his enthusiasm and vigor, for all his continued willingness to throw himself around like a ragdoll in order to give a death defying stunt a palpable sense of realism, as an actor it feels like he’s phoning this one in. Cruise never connects with Morton, is unable to give him the cocksure vivacity the character needs in order to remain interesting. Instead, he’s a clueless wet noodle whose moments of heroism are nonsensical and inauthentic, and while the actor is far from horrible it’s still hard to get past the feeling he’s here picking up a paycheck and could seemingly care less about delivering the emotional goods at any point whatsoever.

Kurtzman, making his directorial debut, does stage a couple of nice sequences, most notably an early set piece involving a military transport plane plummeting out of the sky, Cruise and Wallis getting tossed around like beanbags as they take a zero gravity thrill ride that’s suitably impressive. There’s also a pretty terrific car chase in the middle of a secluded bit of British forest I found suitably exciting even if it wasn’t particularly groundbreaking, while the appearance of Dr. Jekyll’s devilish alter ego is made enjoyable mainly because Crowe appears to be having such demonic joy in giving Mr. Hyde life.

But that’s really all I’ve got as far as positives go. I will, say, not to beat a dead horse, but it’s interesting to me that, for as obnoxious and as laughably clumsy as they were, the two Fraser/Weisz efforts did a far better job of creating a sense of mystery and adventure than this film does, and I personally can’t stand either the ’99 The Mummy or its even more dreadful sequel The Mummy Returns. More importantly, for all their numerous faults, those pieces of pop entertainment treated Wesiz’s character as an equal, her strength, resilience and intelligence never in doubt for a single second.

This version of The Mummy refuses to do the same, a mystifying turn of events to say the least, especially considering a hallmark of Cruise’s Mission: Impossible efforts is the continual presence of strong women who can hold their own right alongside him. Once you acknowledge the script is all exposition, that nothing that transpires means a gosh darn thing other than ensuring adventures featuring more classic movie monsters are forthcoming, this new take on the material is an even more serious waste of time. If this is what Universal’s Dark Universe is going to be like, I can’t say I’m excited, and as a genre fanatic who adores the likes of The Wolf Man, Dracula, Frankenstein et al, that is about as depressing a sentence as any I’ll likely write this year. 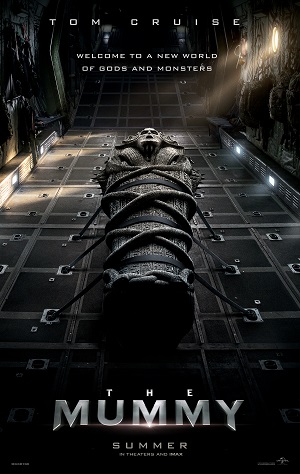