Nebraska revolves around a conceit that, somewhat understandably, might have some scratching their foreheads in incredulity. Woody Grant (Bruce Dern) has received one of those sweepstakes notifications in the mail, the type that proclaim the company has been ‘authorized’ to award him its one-million dollar grand prize. It’s not true, of course, but he’s convinced himself that it is, much to the flabbergasted shock of youngest son David (Will Forte). They will make the 750-mile journey to Lincoln, Nebraska; the former to pick up his expected prize, the latter to ensure he doesn’t get into trouble; stopping in their former hometown of Hawthorne to visit the family along the way. 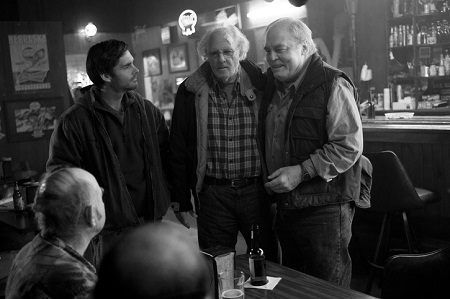 Much like a person wants to believe they’d never be fooled in the same manner the central protagonists in Compliance were tragically, horrifically hornswoggled, it goes without saying that all of us like to think we’d never get in the place where we’d allow ourselves to believe this type of sweepstakes notification to be true. Thing is, people have done exactly what Woody tasks himself with in real life, so it isn’t like Bob Nelson’s first produced screenplay isn’t drawn from actual events. More, there is a deep, understated insight as far as mental illness and aging are concerned that can potentially catch viewers by surprise, the subtly of the dramatic interactions between father and son universal even if the elements of the cross-country road trip itself feel slightly implausible.

Director Alexander Payne (Sideways), for the first time taking the reins of a motion picture he hasn’t played a part in scripting, showcases absolute control while shepherding things along their relatively preordained path. Woody and David’s journey doesn’t so much surprise as it inspires, each step of their trek inching them closer and closer to a place neither could have expected before it began. There is a level of understanding of the human condition and all its peculiar nuances and idiosyncrasies the filmmaker seems particularly good at exploring, this film comfortably fitting upon his short – if outstanding – cinematic resume with relative ease.

It helps considerably that Dern, a legendary actor with decades of great performances and moments under his belt, is spectacular, capturing one’s attentions the first moment his laconically wanders into the frame. More, he does so without his usual assortment of tricks and quirks, and much like Payne forced Jack Nicholson and George Clooney to refrain from their usual thespian trademark traits in About Schmidt and The Descendants he gets the former Coming Home Academy Award nominee to do the same here. He is extraordinarily subdued, quietly intense, tapping into Woody’s frazzled intellectual synapsis with surprising ease, showcasing the interior battle he’s having inside his own head with a clarity bordering on magnificent.

But he is equaled, in some respects shockingly so, by Forte, the former “Saturday Night Live” cast member giving the performance of his career as the caring, moderately befuddled son unsure if helping his father in this fashion is doing him more harm than good. David is more or less the straight man, forced to react most of the time to all that is spiraling out of control around him, the majority of the showy emotional theatrics in the hands of his costars. But if Forte wasn’t so strong in the role, if I hadn’t related to him so completely and without reservation, it is highly unlikely the movie would have resonated as beautifully, and to my mind as supporting turns go his is without a doubt one of the best I’ve seen in all of 2013.

Nelson, besst known for his work as a cast member, writer and all-around go-to guy working on Seattle television’s groundbreaking sketch comedy show “Almost Live,” shows terrific screenwriting chops, his dexterous script a grand mixture of laughs and emotion reminiscent of Preston Sturges’ Miracle at Morgan’s Creek and Hal Ashby’s Harold and Maude.  He does a great job of balancing heart, sentiment and drama, things rarely, if ever, slipping into treacle-laden sentimentality he and Payne going out of their way to keep things convincingly centered no matter how absurd events might indeed become.

Phedon Papamichael’s (This is 40) dexterous, shatteringly beautiful black and white cinematography amazes, the windswept streets of Hawthorne recalling in many ways the ethereal, emotionally tragic sparseness of Peter Bogdanovich’s The Last Picture Show. There’s also some excellent supporting work turned in by the likes of June Squibb as David’s whip-smart, acid-tongued mother who isn’t exactly thrilled to see her ex-husband wandering the streets of town, while Stacey Keach has some dazzling moments as Woody’s self-professed ex-business partner who firmly believes he’s deserving of financial recompense for wrongdoings he’d rather not revisit.

Overall, however, this is Dern and Forte’s show all the way, the pair achieving a symmetry in performance and in chemistry that is incessantly authentic. For all its imbalances, even with the absurd nature of the premise that compels events forward, their relationship is entirely real, the simple triumph of saying, “I love you,” a victory all of us can relate to, making Nebraska a father-son saga of perseverance and commitment worthy of celebration. 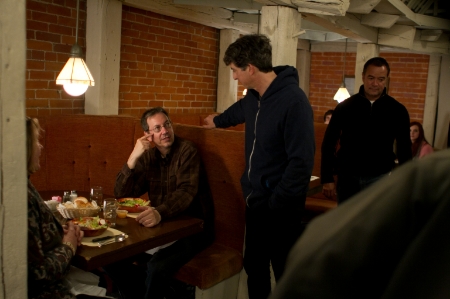 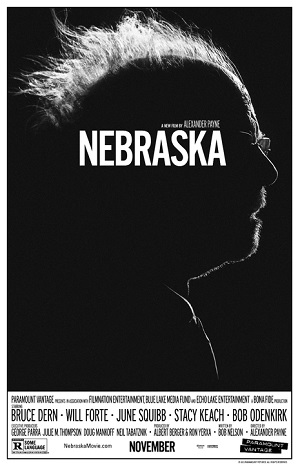