Los Angeles is a cesspool of crime. Standing up to all this depravity is Officer Downe (Kim Coates), a seemingly unstoppable supercop willing to go to any and all lengths to see evildoers meet up with justice. But as rookie police officer Gable (Tyler Ross) discovers, there’s more to Downe than meets the eye, the conspiracy keeping him on the force battling bad guys going all the way to the top, Police Chief Berringer (Lauren Vélez) calling all the shots.

Based on the graphic novel created by Joe Casey and Chris Burnham, Officer Downe is like a supernatural Robocop, the main character a violent force of nature who shoots first without bothering to ask a single question. He gets punched, stabbed, shot and blown to smithereens yet just keeps on coming no matter what, Downe’s only purpose to stop crime, his own personal wellbeing not even notated on the important list as an addendum or an afterthought. Downe shows up at a crime scene, announces his presence and then proceeds to lay waste to all who stand against him, a ragtag team of officers, a group that includes Gable, left to pick up the pieces afterward.

Scripted by Casey, directed by Slipknot founder M. Shawn Crahan, the movie itself is a turgid shamble of a bunch of ragtag, barely connected plots that are never explored as creatively or a dexterously as they potentially could have. Loud, obnoxious and edited to the point of incoherence, there is shockingly little to get excited about, a number of potentially amusing avenues left frustratingly unexplored. It’s like the creative team watched Maniac Cop, Robocop, The Terminator, Batman Returns, Dick Tracy, The Crow and both of Robert Rodriguez’s Sin City efforts and thought it would be a grand idea to throw the lot in a blender and see what the resultant soup looks like.

Slop. That’s what it is. Slop. While Coates is perfectly cast as the titular character, the veteran character actor known for notable signature turns in everything from The Last Boy Scout to The Client to Pearl Harbor to Black Hawk Down to Silent Hill and most deserving of greater recognition by a larger audience, his aggressive scowl in and of itself does not a movie make. Additionally, unlike Peter Weller in Robocop, or even Boris Karloff in Frankenstein (a film noticeably name dropped in drunken conversation), the actor doesn’t get a lot of opportunity to explore any of the twisted, long-buried emotions hidden within save for one brief scene at the very end. It’s almost as if the filmmakers refuse to make the best possible use of him, and as such the movie as a whole continually suffers.

Not that it would likely matter. This is pretty threadbare stuff. The villains (a nondescript trio of literal human creatures nicknamed the Fortune 500) are extreme but pointless, while the gag involving around the assassin they hire to bring them Downe’s head gets old after about five full seconds. You see, he’s a kung fu impresario known as Zen Master Flash (Sona Eyambe) and he talks in badly dubbed English like he’s out of a Hong Kong import from the 1970s, and it’s as tiresome and as obvious a joke as they come. But, making it worse is that the guy just isn’t that threatening, and like everything else inside the movie his presence is nothing short of a half-baked concept desperately searching for a compelling reason to exist in the first place. 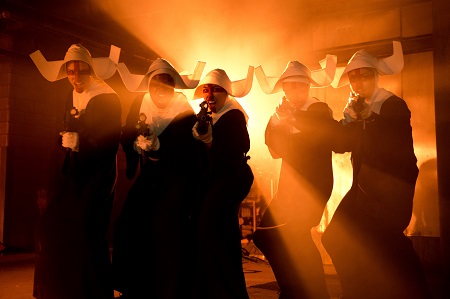 The only exception to all of this, and it is a minor one, is the appearance of a bunch of gun-running nuns led by their Mother Supreme (Meadow Williams). Williams is having a good time, her manic energy adding a bolt of electricity that briskly enlivens the few moments she happens to be around. It’s also one of the few moments where Gable gets to question whether having an officer like Downe on the police force is a good thing, and while this brief hint of thematic complexity is quickly discarded, the fact it’s around for even a second or two is worth pointing out.

More often than not, I’m more than willing to give movies like this one the benefit of the doubt. I’m all for down-and-dirty exploitation genre filmmaking, and when new artists burst onto the scene I’m always hopeful they’ll rise to the challenge and make their grindhouse cinematic experience a memorable one. But Officer Downe wastes its potential, does nothing of merit with its star and runs in circles searching for a reason to exist for almost every one of its meaningless 88 minutes. It’s just not very good, my disappointment only made palatable due to the fact I’ll likely not have to sit through it a second time at any point in the foreseeable future. 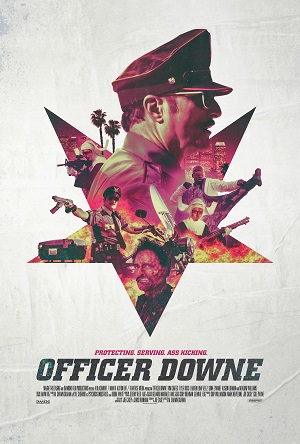