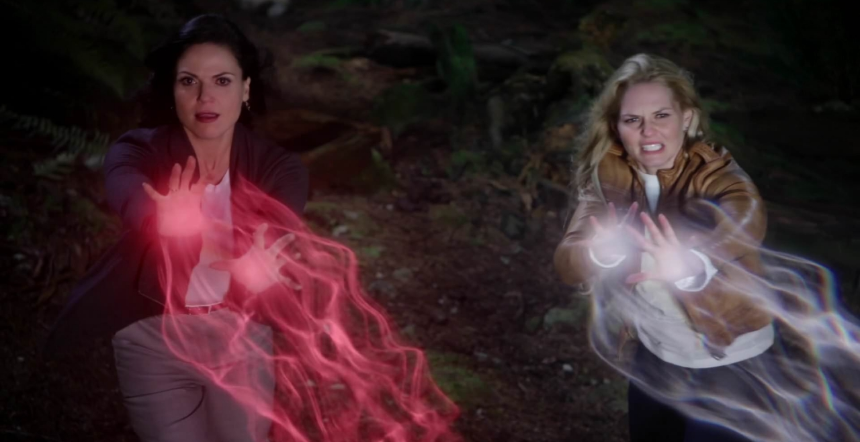 All appear fine in Storybrook, but it’s only a façade, as Mr. Gold/Rumpelstiltskin (Robert Carlyle), even though he’s finally married to Belle (Emilie de Ravin), is determined to get over the death of his son by engaging in some of the foulest magic imaginable. Meanwhile, Regina (Lana Parrilla) is determined to find her own ‘Happy Ending,’ deciding to see if she can discover the identity of The Author hoping he or she will write her one, hopefully involving Robin Hood (Sean Maguire). 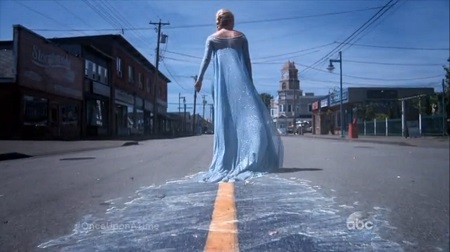 As for Emma Swan (Jennifer Morrison), the child of Mary Margaret/Snow White (Ginnifer Goodwin) and David Nolan/Prince Charming (Josh Dallas) is still trying to come to grips with her newfound magical abilities, doing so at the same time the mysterious Elsa (Georgina Haig) has appeared into town seemingly out of nowhere. Her ice powers have trapped the citizens of Storybrook in metaphorical deep freeze, the beautiful Queen of Arendelle in a desperate search for her sister Anna (Elizabeth Lail) who has gone missing some time ago.

After a strong Season 3 that, even though it was arguably the series’ best up to that point, saw a fairly strong dip in rating, Season 4 of Once Upon a Time brings in the characters from Disney’s megahit Frozen in an obvious and blatant attempt to play upon that Oscar-winning film’s popularity. The entire first half of the season is practically sidetracked by Elsa and Anna’s respective stories, the things affecting the rest of the core characters – especially as it pertains to Regina, young Henry (Jared Gilmore), Belle, Mr. Gold and Captain Hook (Colin O’Donoghue), the latter’s puppy dog infatuation with Emma admittedly sexily endearing – but on something of a minor backburner as the two sisters run around manically looking to reunited. 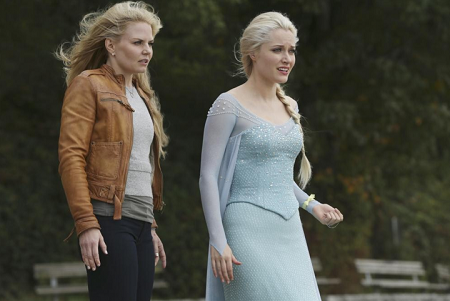 This would be okay if creators Edward Kitsis and Adam Horowitz, along with their talented cadre of writers, we courageous enough to shake things up in the same way they had with the stories of Peter Pan, Little Red Riding Hood and gigantic handful of others. But they’re not, so beholden to mass audience affinity for the animated motion picture they are hesitant to shake up the relationship between Elsa and Anna in any way that matters. As such, what could have easily been a four, maybe five episode story arc gets drawn out to frustrating lengths, caring about what is happening and why not especially easy to do. Thankfully, both Haig and Lail are excellent, the former have wonderful rapport with Morrison and as tiresome as I might have found this story arc to be I wouldn’t have any problem whatsoever if the two get the opportunity to partner up again at some future date. 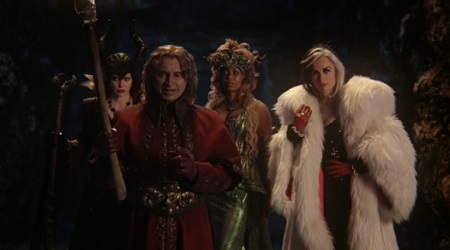 So, giving Cruella superpowers is obviously kind of silly, yet in the world that Once Upon a Time has constructed it does kind of work. Also, Smurfit is wonderful in the role, the episode revealing how she gains her powers remarkably effective. Also, Regina’s continued evolution throughout the season is outstanding, Parrilla once again proving that, in a cast of virtual all-stars, she continues to be this series’ most magnetic and interesting asset, even the sparks flying between Morrison and O’Donoghue not enough to pull attention away from the reformed Wicked Queen.

The final two-part episode is fantastic, literally flipping the script between heroes and villains in a way that is continually fascinating, young Henry once again the key in making sure everything ends up back the way it is supposed to. It all builds up to final scene that as superb as anything this show has ever offered up, leading me to think Season 5 of Once Upon a Time could see the series back on track for a 22-episode run that lives up to the cliffhanger Kitsis, Horowitz and company ultimately came up with. 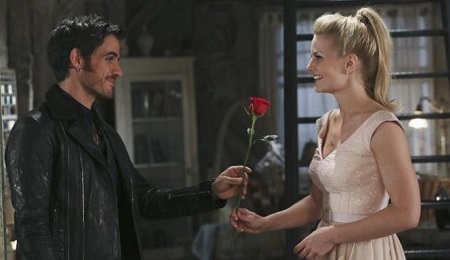 Defrosting Frozen (9:56) – Cast and crew discuss bring the Disney animated sensation to life within the confines of Once Upon a Time and how Elsa and Anna’s stories mix inside the series’ ever-shifting mythology.

Behind the Magic (9:58) – Actors Ginnifer Goodwyn and Josh Dallas offer up a tongue-in-cheek tour of the sets; funny stuff.

Three Who Stayed (5:23) – Faux mini-documentary featuring Patton Oswald documenting why some residents of Storybrook decided to stay after Elsa inadvertently plunged the town into a deep freeze.

The Fairest Bloopers of Them All (4:56) – A tiny bit better-than-average blooper reel that’s still not worth getting all that particularly excited about.

I only had time to listen to one of the commentary tracks, the one for “Mother” with Espenson and Parilla, and it’s outstanding. My gut tells me the rest are pretty good as well. Well, my gut and the fact commentary tracks for previous season’s episodes have all been more or less terrific, the show’s track record on that front admittedly stellar.

Fans won’t care, and Frozen fanatics are almost certain to disagree, but gosh darn it if I didn’t feel like Season 4 of Once Upon a Time is running in rather obnoxious and tiresome circles while it’s dealing with the Elsa/Anna storyline. Same time, there’s still a lot of quality stuff going on here, and the writing involving both Regina and Emma is, more often than not, wonderful. I also like the way things are set up for Season 5; here’s hoping the series lives up to the promise hinted at in the final moments of this season’s final episode. 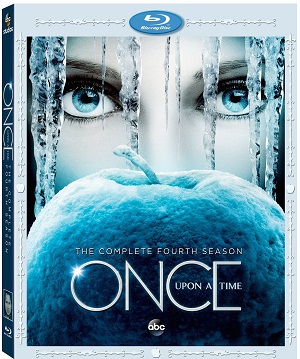