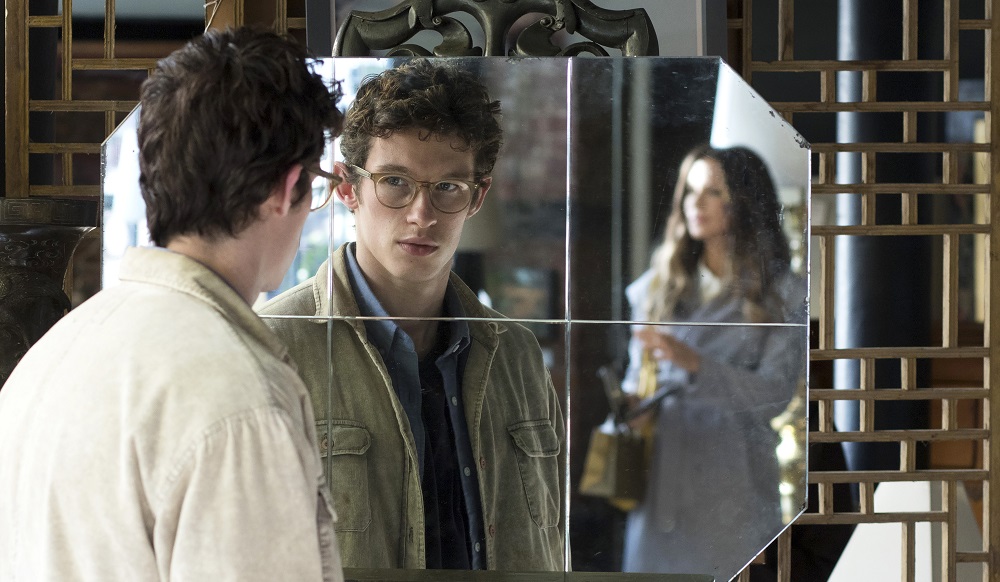 Thomas Webb (Callum Turner) is drifting. The son of powerful New York publishing magnate Ethan Webb (Pierce Brosnan), his mother Judith (Cynthia Nixon) a lonely self-medicating mess who spends most of her time drinking and smoking away the hours of the day, the young man hasn’t the first clue as to what he wants to do with his life. Thomas thinks he’s in love with his best friend Mimi (Kiersey Clemons), her insistence that they don’t take their relationship to the next level driving him mad. On top of that, he’s moderately certain he wants to be a writer even if his father has done everything in his power to steer him in a different direction. He’s also strangely drawn to the alcoholic loner, W.F. Gerald (Jeff Bridges), who just moved into his apartment complex, the two sharing a number of memorable chats over a glass of whiskey even though they’ve only known one another for a few days. 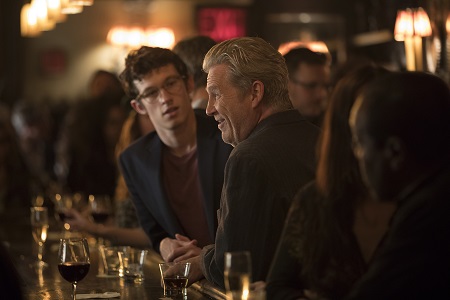 During a random night out with Mimi, serendipitously Thomas spies Ethan cuddling up to a ravishingly sexy woman who is most certainly not his mother. Over the next few days, he begins to follow her, learning that her name is Johanna (Kate Beckinsale) and that she’s a freelance book editor who sometimes works with his dad on new projects. But after confronting her about the affair, Thomas discovers this smart, confident Brit is not to be trifled with. Soon he’s having his own sexual liaison with Johanna, the young man entrusting W.F. with this secret as he tries to figure out what to do next and how it was he ever got himself into such a surreal situation in the first place.

I can’t say Allan Loeb’s (The Space Between Us, Collateral Beauty) script for The Only Living Boy in New York works all that well. It’s noticeably contrived and filled with melodramatic contraptions that came close to driving me up a wall, relying on a number of tidy coincidences in order to get all its characters to sit upon the same merry-go-round. The relationship between Thomas and Mimi never feels authentic, while the manner in which he and W.F. become such fast friends willing to trust one another with their deepest, darkest secrets is just plain absurd.

But while I wish director Marc Webb (Gifted, The Amazing Spider-Man) would have spent more time fleshing out the screenplay with Loeb before starting, maybe having him give it a thorough rewrite in order to clean up some of the more egregious narrative missteps while also making some of the supporting characters three-dimensional and less like soap opera archetypes, the truth is I rather enjoyed this movie. Based mainly on the strength of the performances, and influenced a great deal by directorial Webb’s restraint, I responded to Thomas’s coming of age tale of discovery with far more vim and vigor than I initially anticipated, especially after I had a solid feel for the melodramatic place all of this was headed towards.

It does feel artificial, though, and it’s amazing how fast Johanna turns the tables on Thomas as well as makes her own decisions that are likely far worse than any of the ones he does. In fact, all of the women here don’t come off all that well, an element to the motion picture I didn’t think all that much about after I finished watching it but started to mull on more and more as I thought about it later. None go far beyond stereotype, and all of them are only around to support the men around them as they take the next step in their respective journeys. It’s disheartening in a fundamental way that’s clearly disappointing, making the fact I’m relatively enthusiastic about other elements of the film all the more surprising.

You can thank the quality of the performances for that. Bridges is wonderful, and while this character is hardly a stretch for the Oscar-winner, he still manages to deliver a multidimensional portrait of an artist still searching for answers after untold years of success under his belt that’s continually fascinating. Beckinsale follows up her award-worthy work in Love & Friendship with another solid turn, and if Johanna wasn’t so insipidly written I’d likely be singing her praises rather loudly. Nixon is underutilized to a rather massive degree. Same time, her one big moment, a scene where Judith gets the opportunity to lay down the law to Thomas like he’s never heard before, is stunning, the veteran actress elevating things to a level that was simply remarkable. As for Brosnan, he’s also superb, the emotional complexity he ends up displaying as he spins his way through what should have been a banal, soul-crushing third act twist rather terrific. 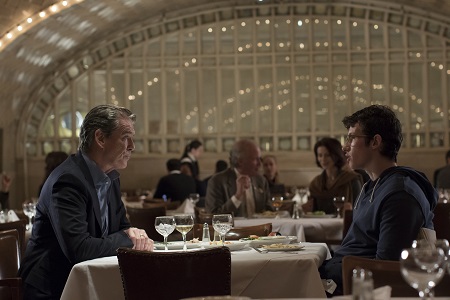 Clemons isn’t used as well as her more established cast mates are, Mimi a crutch aiding Thomas as he wobbles his way through the various ins and outs of this story and little else. As for Turner, he does a fine job, and I certainly feel like the Green Room actor is a star in the making with untapped talents just aching to be put to good use somewhere down the line. But Loeb’s script does him no favors, and while I felt like the screenwriter was attempting to give the character uncomforting complexities similar to those displayed by Ben Braddock in The Graduate, sad to say they’re too facile to ever resonate as fully or as completely as they did in that 1967 classic.

I don’t know. As horrible as a lot of this sounds, I still found plenty lurking inside The Only Boy in New York that I enjoyed there’s no way I can dismiss it entirely. Webb continues to rebound from his time trying to make Spider-Man amazing, and while this effort doesn’t rise to the same heights as (500) Days of Summer or Gifted, it’s once again obvious he’s far more comfortable playing with characters like these than he is leading superheroes in their various battles against any number of supervillains. While I don’t think people should rush out and give this an immediate look, I certainly wouldn’t begrudge anyone from doing so if the opportunity to snag a cheap second-run matinee ticket might arise, Thomas’s story having just enough in the way of merit to warrant a cursory glance. 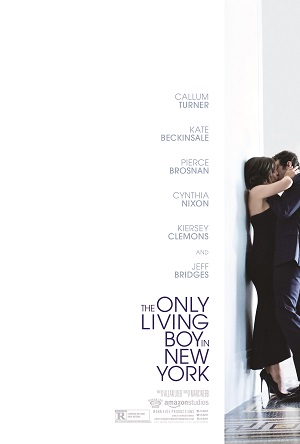