After the defeat of William Wallace at Falkirk, the majority of the remaining Scottish noblemen make peace with the reigning English monarch King Edward I (Stephen Dillane). This includes the respected Robert Bruce, Earl of Carrick (Chris Pine), the king’s son Edward, Prince of Wales (Billy Howle) particularly happy to see his former friend re-pledge his allegiance. To further cement the bond between their respective families, King Edward also ordains that Bruce marry British noblewoman Elizabeth Burgh (Florence Pugh), thinking she’ll be able to keep the hotheaded Scotsman from picking up arms against England again in the future. 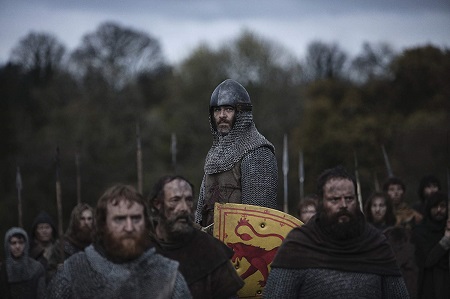 This assumption is wrong. After King Edward captures Wallace, has him drawn and quartered, and then has all his dismembered body parts displayed across Scotland as a warning to the people to never revolt again, Bruce realizes that being under the thumb of English rule isn’t something his fellow countrymen are going to be able to stand. Another revolt is unavoidable, and it’s up to him to lead it. As such, Bruce strikes a deal with the many of the ruling clans and has himself crowned King of Scots. In turn, King Edward sends his son to deal with this latest uprising, hoping that he’ll both prove himself on the battlefield as well as display leadership qualities he has so far in his life failed to showcase.

Acclaimed director David Mackenzie reteams with his Hell or High Water star Pine for the early 14th century epic Outlaw King. While I can’t speak to the veracity of the screenplay (credited to five different writers, including Mackenzie), Scottish history not exactly my strong suit. It feels real, and that’s what is important, the grimy, mud-splattered aesthetics of Bruce’s world having a grungy validity that’s palpable. There’s something gripping about what Mackenzie splashes up on the screen, especially during the kinetically staged battle sequences, the grotesque brutality of these close-quarters combats having an abhorrent beauty I couldn’t take my eyes off of.

But there is a strange emotional detachment to the narrative that I had trouble getting past. Character development is not this story’s strongest element, and with everyone dressed so similarly, oftentimes covered in blood and sporting massive beards there were times I had trouble distinguishing between who was who and which side they were fighting for. Most frustratingly, the relationship between Bruce and Elizabeth isn’t fleshed out as clearly as it needed to be, making the fact they seem to form such an unbreakable bond as husband and wife moderately unbelievable. Pugh, in particular, is given precious little to do, and considering just how incredible she was in 2016’s Lady Macbeth this almost can’t help but be a massively disappointing turn of events.

Thankfully Pine is superb, delivering a richly layered, strikingly internalized performance. He’s magnetic as Bruce, bringing a masculine physicality to his portrayal that’s suitably virile and robust. But there is an innate uncertainty to what Pine is doing that’s consistently compelling. The ways in which Bruce battles his religious beliefs, his family commitments, his growing affection for Elizabeth and his sense of duty to what he believes to be the best course of action for the Scottish people, all of that is there. The actor conveys so much with the way he holds his body, the increasingly withered manner in which he contorts himself physically  adding an extra layer of emotional magnetism. It’s spectacular stuff, Pine holding the screen with an iron grip that only grows in magnitude as events progress.

From a technical standpoint Mackenzie is right at the top of his game. As stated, as shot by the great Barry Ackroyd (The Hurt Locker) and edited by Jake Roberts (Brooklyn) the two primary battle sequences are magnificently staged. The climactic Battle of Loudoun Hill, which wasn’t the end of Bruce’s war against England but was still an important stepping stone to his eventual victory, is one of the great action sequences I’ve seen this year. It’s a nasty and cruel affair, the forcefulness of the violence leaping off the screen in ways that made me feel as if I was there slogging through the mud struggling to survive. 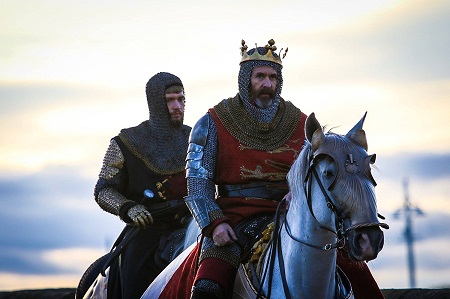 There is also some nice supporting work turned in by both Dillane and Howle, while Aaron Taylor-Johnson is equally unrecognizable and he is sensational as James Douglas, Lord of Douglas (eventually to become known as Black Douglas), and as terrific as he was in Nocturnal Animals he’s even more incredible here. I just wish the script had spent additional time building a lot of these relationships up more than it does. Instead, there’s an episodic quality to the plotting that can get tedious, and as strong as so many individual elements might be there was still no getting past just how emotionally distant from the majority of the interpersonal dynamics I felt like Mackenzie was keeping me.

Still, when the film focuses on Bruce’s guerrilla warfare against King Edward and then zeroes in on the broadening of his campaign against England with the Battle of Loudon Hill it achieves a belligerent urgency that’s suitably thrilling. Outlaw King might not be Mackenzie’s finest hour behind the camera, but he’s still just too skilled a filmmaker to craft a motion picture that’s not at least somewhat worthwhile. Even with its faults this one ends up being more than a bit better than that, and for those that do get the opportunity to watch this one in a theatre (and not on Netflix), the visual spectacle alone is more than enough to warrant the price of a ticket. 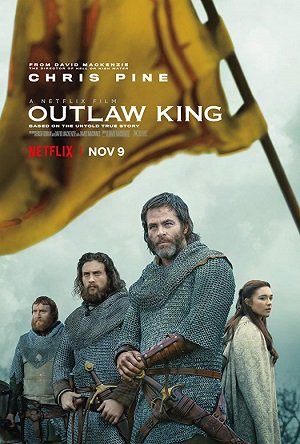